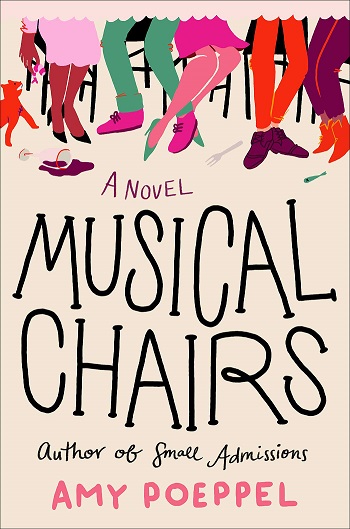 A whodunit isn’t just an effective way to engage readers in a mystery, as Amy Poeppel shows in her entirely charming new novel, Musical Chairs. It’s also a great way to open a rom-com.

The Prelude, as the reader is informed, happened 27 years ago, on the day Bridget is to conceive, either the usual way or via artificial insemination. Fast-forward more than two-and-a-half decades, and Bridget is the mother of twins Isabelle and Oscar. And she’s about to have quite a summer in her country house in Connecticut.

Musical Chairs is part Feydeau farce and part hit sitcom and part British drawing room comedy, the comparison being inspired by the entertaining and satisfying qualities the novel shares with these styles of storytelling. As Bridget’s daughter observes: “Noel Coward, thought Isabelle, could spruce up this scene, get it stage-ready. All that was missing was the slamming of doors.”

Bridget is part of the musical group the Forsyth Trio, founded with pianist Will, her schoolmate at Julliard. They are the mainstays in the midst of ever-changing violinists. People assume they are and have always been a couple. They are not and never were.

Bridget is the daughter of Edward Stratton, a world-famous composer and conductor. He has a mansion near Bridget’s ramshackle country escape from her apartment on the Upper West Side. Bridget grew up with privilege, while Will has always lived on the financial edge. She also grew up having lost her mother at a young age and having been told by her father that she wasn’t good enough to become a professional cellist.

Bridget is looking forward to a bucolic summer of romance with her boyfriend and maybe even a marriage proposal. Until he breaks up with her because his young daughter is going to need a lot of his attention.

Bridget isn’t the only one facing life crises. Will comes back to the building in the West Village that houses his affordable apartment to find a large “For Sale” sign. Daughter Isabelle has quit her job in Hong Kong and wants to stay with her mother for the summer. Son Oscar has also come to the house because his husband of one year is cheating on him. Bridget’s elderly father, meanwhile, announces that he is marrying the recently widowed family friend Bridget has known since childhood.

Poeppel changes the focus of her chapters to highlight the concerns and desires of her twirling cast of characters. In less nimble hands, this might have felt disjointed, but Poeppel makes it work seamlessly and to engaging emotional effect.

Jackie, the new assistant who arrives to help Edward with all his projects, seems terrifically uptight and proper at first glance, until Poeppel devotes a chapter to her and she starts cursing like a sailor (observing that she has ended up in an episode of “Downton fucking Abbey”). In this way, all the characters, main or secondary, feel fully known.

What’s especially lovely in Musical Chairs is the way Poeppel connects her characters to each other. Gavin, the first violinist in the trio with Bridget and Will, has far surpassed them in success and renown since he left it. While he’s in New York to play at Lincoln Center, he bumps into an old friend whose ex-husband is writing a book about Bridget’s father.

Many of the characters, Bridget included, will be reading Gavin’s young wife’s book, Ancient Practices, Modern Life, without knowing of the connection. These are just two examples of intricacies that let the reader know more than the characters have yet discovered.

Poeppel brings love and humor to her characters’ relationships, as well as betrayal and lies and so many disappointments, professional and personal. And secrets, many of them having been kept for years. As Gavin’s wife writes in her book, secrets “damage the soul.” Indeed. Yet, as Poeppel shows, there can be forgiveness and redemption.

Townsfolk figure prominently in the story, as do cats, dogs, and an old barn submitted for landmark status. There is a new love interest for Will (uh-oh, she hates the city and he loves it; how will this ever work out?) and a handyman (surely a love interest for someone) who brings sheep to Bridget’s yard so they can chew down the overgrown grass, along with guinea hens to eat the ticks.

The visuals of Bridget’s house and Edward’s castle are vividly rendered. If readers find themselves feeling the heat and humidity of a sweltering East Coast July, this is no accident.

The list of characters is long and defies full summary. Yet another reason to read this book: Bridget has a sister who is a great friend and sounding board and also quite interesting in her own right, and Edward’s household includes a wise “Housekeeper Emeritus” who helped raise the girls after their mother died.

If there’s one moment when Poeppel puts a foot slightly wrong, it might be with Edward’s German fiancée. The author gives her an on-and-off rendering of a phonetic akzent (the character says, “sank you,” but also says, “than”) that often comes across like a speech in English by Angela Merkel, the overall result being a bit distracting.

Will Bridget and Will disband the trio? Will Bridget sell her house? Will it rain on the day of the wedding? And is Gavin the twins’ father? The mysteries unfold over the course of the novel and at a pace that works for all the plot revelations. Poeppel is equally adept at posing and paying off these “will its” as she is at sustaining the whodunit throughout her delightful novel.