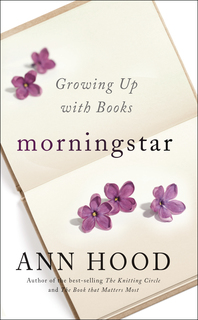 One thing that quickly becomes clear in Morningstar is that Ann Hood speaks to the converted, to those who already have a deep and abiding love affair with books. In her opening pages, she paints a picture of a 4-year-old child who picks up her older brother’s storybook and, as if by magic, reads it.

The lodestone that centers the essays in Morningstar is a book-lover navigating a world where reading is “weird.” By inviting us, the readers, into her life, Hood starts a conversation about the literature that has shaped our own childhoods.

This memoir offers 10 snapshots of a time in Hood’s life, and correspondingly, of a book she was reading. But it’s also about being a particular kind of woman coming of age at a particular time in U.S. history:

“I would lie on the gingham-covered bed and play ‘The Dangling Conversation’ and I would yearn for a boy who knew who Frost and Dickinson were, would who read beside me, who would understand this particular person I was.”

As Hood’s childhood was rooted in the 1960s and 70s, and the books that were available to her (for example, Rabbit, Run by John Updike, The Bell Jar by Sylvia Plath, and A Stone for Danny Fisher by Harold Robbins), the discussion can feel dated to readers who grew up shaped by other books, in other times, and in other contexts.

At its core, Morningstar is a cry to recognize how being shaped by a life of books is a beautiful experience, full of the development of empathy and of understanding about the world, about sex — this is very much a memoir of Hood’s teenage years — and also about what it means to be other. But it’s also a glimpse into the books that created Ann Hood the writer, the books that shaped her understanding, the kinds of stories she loves, and why.

The figure of Hood’s mother positions young Hood as an outsider because she loves books. Hood’s mother doesn’t see their value, either metaphorically or literally: “At the cash register, my mother shook her head and sighed. ‘I can’t believe you are wasting your money on a book. A book! Of all things!”

In this way, in contrasting a young Hood against her mother’s more sensible purchases (fake flowers to create new centerpieces for the dinner table), Morningstar decries the value of books and reading on the development of a person.

Yet, it’s not that Hood’s mother isn’t a carefully crafted figure, one who even those of us who love books can understand and empathize with. This is because of the meticulous work Hood does in the introduction.

She posits her parents as being the kind of people who “learned about life from hardship,” whereas Hood learned from the characters and plots she devoured. One of the truths a reader will tease out of Morningstar is that we will find the world divided into those who understand — a teacher who commands that Hood will no longer go outside for recess, but will stay in and “read all those books” — and those who don’t.

There are moments when I want to dive deeper into Hood’s life and step away from the book she is discussing for a minute, if only to return with a deeper understanding of myself. While circling around sex education and Robert H. Rimmer’s The Harrad Experiment, for example, Hood narrates a day in Home Economics class:

“We didn’t have to bake the cookies, just drop them by the tablespoonful onto the wax paper and put them in the refrigerator for thirty minutes. When they had cooled and hardened, we would place them onto a silver tray and bring them down to the boys in shop class. It smelled good down there, musty and woodsy at the same time. When we walked in, the boys lifted their goggles onto their heads and devoured our cookies while we watched.”

Many of these moments remain untouched, uncommented on, and while they are some of the strongest parts of this memoir, they are set aside for more focused discussions of the book in question.

Hood’s memoir is not so much about literacy as it is about bringing new readers into the circle by telling stories of transformative books. The tendency, though, to sink into lukewarm nostalgia and awkward repetitions plagues some of the essays in this short memoir.

Yet, Morningstar’s intended audience will find novels they love, and novels they haven’t had the chance to read within these pages. They will be invited into a celebration of reading — and into a life of introspective readership — through Hood’s comforting prose.

Jenny Ferguson is Métis, an activist, a feminist, an auntie, and an accomplice with a Ph.D. She believes writing and teaching are political acts. Border Markers, her collection of linked flash-fiction narratives, is available from NeWest Press. She lives in Haudenosaunee Territory, where she teaches at Hobart and William Smith Colleges.