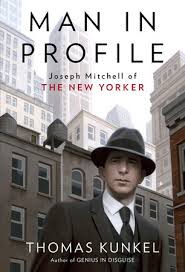 Man in Profile presents both a literary and personal account of a writer whose life was molded by his roots in North Carolina and expanded by his immersion in New York. Although less known today, Joseph Mitchell had a big following in the mid-20th century because he wrote with clarity and empathy about ordinary people, some offbeat characters, and day-to-day life.

Now we have an opportunity to learn more about this gifted, but eccentric man with a biography written by Thomas Kunkel. A former journalist and currently a college president, Kunkel is well acquainted with the golden days of The New Yorker, having previously written a biography of founder Harold Ross, Mitchell’s long-time editor and friend. The book is strengthened by Kunkel’s mining of Mitchell’s journals and access to family archives. Kunkel brings Mitchell alive.

McSorley’s Old Ale House in Manhattan’s East Village is one of the most legendary bars in New York City. This is partly due to its longevity — it opened in 1854 — but also for its notable visitors (including Abraham Lincoln).Yet, its mystique was solidified by a series of stories Mitchell did in the 1930s for The New Yorker. The engaging stories he told about McSorley’s were replicated when he tackled gypsies, Mohawk steelworkers, habitués of the Fulton Fish Market, a bearded carnival woman, and certainly, the bohemian fabulist Joe Gould. He also wrote about cemeteries, rats, commercial fishing, and environmental degradation.

Mitchell was a newspaperman before embarking on a nearly half-century career at The New Yorker. For most of those years, he walked the neighborhoods of New York seeking to satisfy his curiosity about people and things. With his ubiquitous fedora and Brooks Brothers clothing, he wandered for hours, looking for both subject ideas and entertainment.

He loved cemeteries, architectural history, and wildflowers. He collected bricks and artifacts, including a large collection of pickle forks. But mostly he talked and listened — always listened — with a sympathetic ear. Sometimes this was done while gorging on fish, oysters, clams, and alcohol.

Mitchell’s writing was influenced by James Joyce and by a wistfulness about a vanishing era and city, increasingly at the mercy of the wrecking ball. His melancholy was abetted by bouts of depression as well as his increasing preoccupation with the issue of mortality. Often his subjects seemed to share the doubts and concerns of his own life, and he was not reluctant to admit it.

Mitchell’s presentations of his characters, mostly real but sometimes composite, were affected by his early introduction to anthropology, including his discussions with the famed anthropologist Franz Boas. This was clearly the case in his article on the Mohawk steelworkers, caught between two worlds — as was Mitchell.

Arguably the most famous Mitchell story was about Joseph Gould, which became a movie in 2000 starring Stanley Tucci. The Harvard-educated Gould was a Greenwich Village oddity who supposedly spoke the language of seagulls. He solicited money from people high and low to fund his day-to-day existence as well as his purported massive Oral History.

Mitchell befriended Gould and made him famous by his profile. He also contributed to the Joe Gould Fund. Mitchell eventually learned that Gould was a fraud and that he was not seriously writing anything. Mitchell wrote a sympathetic portrayal of his subject in 1942, but reconsidered him 22 years later with a much more critical one.

The second article would turn out to be Mitchell’s last work. For more than three decades, he was afflicted with writer’s block that was perhaps due to various family issues or maybe his perfectionism. Astonishingly, The New Yorker continued to pay his salary, and even increase it, despite his lack of production.

Mitchell lamented that he outlived most of his colleagues. The most difficult loss came with the death of A.J. Liebling, a great friend, dinner companion, and friendly writing rival. Kunkel describes them as a journalistic Ruth and Gehrig, although the two ballplayers were never as close as Mitchell and Liebling.

One of the most interesting people from Man in Profile is Mitchell’s wife, Therese Jacobson Mitchell. A writer who became a gifted amateur photographer, Therese shared her husband’s interest in documenting New Yorkers going about their lives. Their marriage apparently was a very solid and happy one, and the reader is left wishing to know more about her.

Thomas Kunkel has compiled a profile which should help create a renewed appreciation for the work of a very fine writer. Joe Mitchell might be ambivalent about the probing, but he would likely be pleased with the attention and empathy.