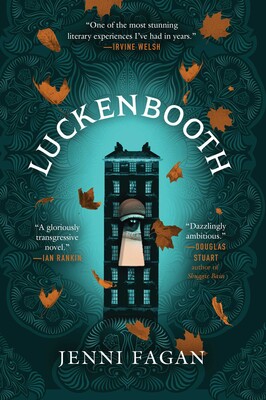 Jenni Fagan’s audacious third novel, Luckenbooth, is a gothic tale about overlapping lives. Her characters occupy an Edinburgh tenement that plays its inhabitants “like an orchestra,” and “there is something deeply wrong with her tuning.”

The score for this orchestra of disparate characters spans the 20th century, beginning with an underlying narrative about the devil’s daughter. In 1910, after poisoning her father, Jessie rows across the Water of Leith in a coffin. Once in Edinburgh, she must honor an arrangement made between her father and Mr. Udnam — a Deacon Brodie-like character — whereby she will bear the latter a child.

When she arrives at 10 Luckenbooth Close, Jessie learns she must sleep on the kitchen floor. Then, in a book-lined study while drinking absinthe and smoking opium, she’s inspected for her sexual suitability. Think Story of O with rats:

“I’m like the girl in the story who lets toads fall from her mouth but others think they are pearls. I still have the smell of death on me. It will be weeks before it goes.”

Jessie agrees to Udnam’s terms. Once she births the baby, she will never see it again. But in a twist which impacts the rest of the novel, she falls in love with Udnam’s fiancée, and, like the mother in Ira Levin’s Rosemary’s Baby, bonds with the newborn devil and decides she can’t give her up.

Gradually, the world of Luckenbooth Close builds in complexity. In the 1920s, we leave Jessie momentarily to meet Flora, a trans woman who finds comfort in sex and a lot of cocaine, although “it’s a fine line between sparkle and psychosis.” Living on the floor above her, a Black American veterinary student named Levi writes letters to his brother while piecing together animal skeletons.

As the novel progresses through the 1940s, we encounter tenants such as Ivy Proudfoot and her lover Morag. The Nazis are a threat, and Ivy wants to be a killer. “I know it’s not socially acceptable, but nobody can say it won’t be useful right now.” William Burroughs also has a walk-on role, and with his lover John, who works in a morgue, exchanges intriguing views on matter and anti-matter and the time-traveling nature of writing.

Surprisingly, it isn’t difficult to keep all these characters straight although the author’s idiom is sometimes a little jarring in the early-20th-century chapters. “Fuckability,” “24/7,” and “it’s a thing” belong firmly to 21st-century vernacular. But the overall confidence and spirit of her writing make this a minor quibble.

By the time we get to the 1970s, things at Luckenbooth have become deeply sinister. Here, Fagan pulls out all the stops, looking evil straight in the eye and working the numerous components of this ambitious tale into a cohesive whole. The overarching narrative is built out of lives on the fringe that intersect and sometimes converge. Though individual stories are occasionally inconclusive, I suspect this was a conscious choice. Since all the characters and their transient half-lives remain in the ether of 10 Luckenbooth Close, the building itself becomes the protagonist.

It’s men (especially white, straight ones) who are the enemy. Mr. Udnam resides in the building for several decades. He’s like Jekyll and Hyde, with “a truly terrible sense of his own greatness. He has the serenity of a man entirely without conscience.” If you’re a woman in this world, a man like this will do everything he can to trap you. As Ivy Proudfoot observes:

“If you had some kind of disability or maybe you just smelled weird, then before you know it, you are being hauled out of your lifelong church congregation and put to death in front of everyone in the most inhumane way possible.”

Anger toward men percolates up through the century, right to the book’s conclusion. In 1999, Dot, a squatter in the now derelict #10, wonders why there are so many statues of men around Edinburgh. “Like they’re the only ones who ever thought about anything. Where are the women? Buried in the bones of the building, that’s where the fucking women are.”

So, while evil lurks around every corner, you won’t find much love in Luckenbooth. According to one character, love works like a poultice, pulling demons up to the surface. “It’s like a disease, Love,” Flora thinks in an early chapter, “80 per cent proof. Risk of death if you drink it. Can send you mad bad blind and delirious. It is nothing like the no-risk companionship of loving a close friend. To decay without passion together for eternity, the traditional way. Flora would rather die than do that.”

Even so, I would’ve welcomed a bit more from the (comparatively) vanilla Agnes and Archie Campbell and their pet parrot, if only for comic relief. Agnes is a medium who conjures up the building’s spirits on her Ouija board, and Fagan has written some marvelous banter for this couple. At one point, Archie shouts, “If you block the kitchen sink with ectoplasm one more time, I’m fucking leaving ye!”

Conversely, I could have done without the evil Queen Bee and her vile gang of animal-masked killers. But no one sticks around for long in Luckenbooth, at least not in bodily form, and there’s something for every fan of gothic folklore here. Readers of Carmen Maria Machado will love Jenni Fagan.

In its final chapters, the book offers a tribute to the split personality of Edinburgh. Perhaps because it’s a city I know reasonably well, I could have lingered several more pages with Dot the squatter and her observations. “Edinburgh,” she says, “is all seasons and movement — space, breadth — modern, ancient — experiment, tradition — conservatives, crooks, academics, bakers, curators, beggars, all the many graves seen and unseen. It is a most uncompromising city.”

And Luckenbooth is a most uncompromising book.

Dark themes aside, this story about a hapless (and shiftless) protagonist is surprisingly funny.