This smart courtroom thriller manages to humanize the law. 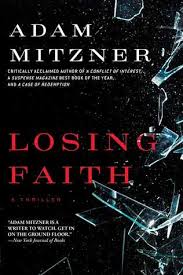 Like many a top-drawer legal thriller, the fast-paced Losing Faith is also a psychological thriller. Charged with the murder of a judge with whom he was having an affair, Aaron Littman is the only one who seems to know that he is innocent.

Even though the legal details of the case, the portrayal of the give-and-take in the courtroom, and the inside look at how a major law firm operates are all handled with authority and vivid detail, it is Aaron’s emotional ride that gives the book its strongest hook and its high-powered suspense.

When the liberal judge originally assigned to the Nicolai Garkov case is found no longer competent because of advancing Alzheimer’s, Judge Faith Nichols takes over. The indictment against Russian Mafia player Garkov covers a wide range of criminal activities, most notably laundering money for a hedge fund that finances terrorists.

Garkov manipulates the hiring of Aaron as his defense attorney to fight the government charges. Why? Well, he knows that the judge whose ruling determines his fate is Aaron’s lover. Neither Aaron nor Faith would want that secret exposed, as it could be both marriage and career ending. That’s a lot of pressure.

But if Faith succumbs to blackmail and acquits Garkov, she will not get the Supreme Court appointment that is otherwise a sure thing. That, too, is a lot of pressure.

Before matters unfold much further, Faith is found murdered — beaten to death. The growing body of evidence points toward Aaron, whose colleagues were not happy when he besmirched the Cromwell Alton firm’s prestigious name by linking it to Garkov.

Aaron’s colleague, mentor, and good friend, Sam Rosenthal, chooses to defend Aaron against the murder charge. Before everything explodes in Aaron’s face, he decides he’d better admit his infidelity to his lawyer and to his wife.

The emotional heart of the book involves Aaron’s attempt to redeem himself. More and more, he is forced to admit that the case against him would impress a jury. And, given his indiscretion, he is not a sympathetic character. Having his wife, Cynthia, stand by him would go a long way toward countering his negative image.

Beyond the problem of appearances, Aaron is truly contrite. He has come to value what he’d nearly thrown away. After her initial outrage, Cynthia decides to give Aaron a second chance. Mitzner’s portrayal of the ebbs and flows of this rebuilding process, which also involves their two daughters, is delicately and movingly drawn.

Waiting in the wings in case the Littman marriage fails is Aaron’s junior partner, Rachel London. She is deeply in love with him, and, though Aaron has aided her career in the firm, he has backed away from her too-obvious longings. Of course, she is a brainy babe. So was the judge. Cynthia is a looker, too.

The government’s case, presented forcefully by Victoria Donnelly, is largely circumstantial, but still compelling. Once the adversarial force has mounted its attack, the art and science of legal gamesmanship becomes a fascinating center of interest. The defense tramples on the concept of timely discovery and disclosure, but mostly gets away with it. Mitzner carefully draws the conduct and personalities of the lead attorneys, Rosenthal and Donnelly.

What’s missing as a possible defense is a strong alternative theory about who killed Faith Nichols. Garkov certainly could not have done it personally, though he has long tentacles. Faith’s cuckolded husband looks like a possibility, at least for motive, but there’s no evidence.

What kind of rabbit can Sam Rosenthal pull out of his magician’s hat? Is he past his prime? Too close to Aaron? Something is not working. After all, the readers know that Aaron is innocent. At least one other person, the killer, knows it as well.

Another center of interest is Mitzner’s pitch-perfect portrait of how work gets done and how relationships adjust in a large law office. The structure of power and influence, the race for billable hours, the difficulty in building a life away from the office and the courtroom, the favors, the expectations, the reputations, the strategies, and the rivalries.

Losing Faith is a gimmicky title, but it has a lot to do with what’s at stake beyond the life of an individual. Things we have faith in are questioned. Cynthia and her daughters can easily lose faith in Aaron. Aaron and others can lose faith in the system and, thus, in the possibility of justice. Pillars like Sam can lose faith in the ideals they’ve cherished, or in their ability to hold onto those ideals.

By giving us a range of viewpoints, Mitzner deepens our awareness of how the law is a very human institution, no better than those who are agents of the system. Even while keeping us glued to the final outcome of the case, he reminds us that justice is, at bottom, the interplay of people with ideals, drives, skills, faults, and fears.