Chronicling the rise and fall of Britain's iconic smog. 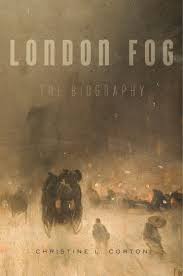 Widespread concern with pollution, environment, and climate change, Kathryn Schulz recently argued in the New Yorker, has occasioned a rise in both fiction and nonfiction related to “weather.” Focusing on Alexandra Harris’ Weatherland, Schulz cites in passing several other examples, including Christine L. Corton’s London Fog: The Biography.

In London Fog, Corton interweaves a history of an atmospheric phenomenon with a history of its representations. Her salient insight is the sheer ubiquity of fog, in fact and as image, in both the quotidian and imaginative lives of London from the mid-19th to mid-20th century. Her signal skill is evoking the quality of that fog — its colors, textures, and densities, its durations and extensions — as well as its capacity to conceal and confound. Thoroughly researched and clearly written, if highly discursive and descriptive, London Fog tells an intriguing story illustrated with copious period cartoons, drawings, paintings, photographs, and film stills.

Many writers, Corton notes, treat London fog “as a looming presence, alive and malignant,” presumably giving her warrant to call her study a biography. The glib generic trope breaks down at agency, obviously, since the ostensibly “biographical” subject lacks consciousness, intentionality, and even sentience. The trope proves useful, though, in providing a chronological structure that allows Corton to organize her themes, unpack their historical evolution, and create narrative momentum: She tracks London fog, through eight chapters and a conclusion, from “birth” to “death.”

Corton writes that “true London fog, thick, yellow, and all-encompassing, was born in the 1840s,” though dense fogs mixed with coal smoke had plagued London since the 17th century and had increased in frequency and taken on “a new character, thick, widespread, and prolonged,” in the early 19th century. By mid-century, natural fogs, smoke from the “domestic coal fires” of a rapidly expanding urban population, and “noxious emissions of factory chimneys and workshops in the early stages of the industrial revolution,” together produced a sulfurous yellow mix with the sobriquet "pea soup.” (Made from “dried yellow split peas, a staple food of the urban poor,” pea soup was yellow, not green.)

Tracing the roughly hundred-year lifespan of her protagonist, Corton locates growth spurts in 1873, “one of the worst fogs in living memory,” and in 1879; identifies and charts the fog’s “murky peak” in the 1880s; and follows its overall decline in frequency and intensity thereafter. Though “another great fog” returned in 1922, and a “Great Killer Fog” in 1952, the “last serious London fog” made its appearance in 1962. It then died, as it had lived, of both natural and unnatural causes. At every step, the fog’s primary antagonist dogged it: The National Smoke Abatement Society (and its predecessor, contemporary, and successor organizations) successfully pressed for clean air acts in 1853, 1926, 1936, and 1956.

Corton’s treatment of London fog itself reads better than does her more expansive treatment of its representations. As an explicator, she leans on plot summary; focuses on theme at the expense of form; reduces ambiguous metaphors to simplistic allegories; and, as a result, produces superficial readings. These readings, moreover, are repetitive, first, because fog almost always serves writers both as plot device and metaphor, an obvious point that she belabors, and, second, because fog offers writers limited possibilities for either plot or metaphor, producing literary redundancies that Corton cannot dodge.

The author has covered the ground well, though, finding both the important and the obscure. She dubs Dickens “the creator of London fog in the popular consciousness” and the opening of Bleak House “perhaps the most famous passage on London fog to be found in all literature.” She canvasses residents (Stevenson), resident aliens (James), visitors (Taine), and returning expats (Kipling) on their differing takes on the fog. And she discusses the alignment between Impressionism as style and fog as subject in Whistler and Monet, “the two great painters of London fog,” and, somewhat later, Alvin Langdon Coburn, its most notable photographer.

Corton also has teased out the paradoxical intimacy between fog and crime: Fog conceals crime while it reveals, at least in fiction, criminality — it turns London dark and frightening, for example, just as a vaporous dose turns Jekyll into Hyde. She introduces us to “linkboys” and “linklighters,” hirelings who lighted one’s way through the fog while their accomplices lightened one’s pockets. And she indicts “King fog” as the main conspirator in crimes against women, invoking the Jack the Ripper murders, Marie Belloc Lowndes’ literary take on them in The Lodger: A Story of the London Fog (1911), and Hitchcock’s silent film adaptation of Lowndes (1927) — an early moment in the lasting ménage à trois of crime, fog, and film.

Corton, finally, has identified a telling transvaluation in the political symbology of fog. A domestic phenomenon, London fog typically had symbolized “the threat to the clear outlines of a hierarchical social order as it dissolved moral boundaries and replaced reassuring certainties with obscurity and doubt.” Between the Boer and Great Wars, however, London fog became “something foreign,” and often symbolized “the supposedly disruptive influence exerted on British society and politics from outside.” Fog represented a new form of criminality, as in Conrad’s Secret Agent (1907) — “the murky and indeterminate world of traitors and spies.” It became, in effect, a repository for xenophobia and ideological terror.

Something perhaps even more interesting also happened after the turn of the century. The public increasingly associated London fog with domestic coal fires (much to the delight of industry), while, concurrently, writers employing fog as a key device increasingly set their fiction in the 1880s. The blend was a recipe for nostalgia: London fog became a symbol of English domestic virtue lost to modern times — a source of civic and cultural pride. Anglophiles across the pond took note: Gershwin, in the 1930s, paid homage to London fog in song, and a clothing manufacturer, in the 1950s, with a now iconic raincoat.

Henry Antoine Des Voeux, honorary treasurer of the Coal Smoke Abatement League, coined the term “smog” (fog plus smoke) in 1904, though it took hold only later in the century and for a different problem: hydrocarbon emissions. Since smog is now “a universal urban phenomenon rather than a characteristic of one particular city,” Corton shrewdly observes, “it has failed to capture the imagination of writers and artists in the same way as the traditional pea-souper.” Put differently, we are not likely to read Manson: A Story of the LA Smog, or to hear “A Smoggy Day in Beijing Town.”

Charles Caramello is associate provost for Academic Affairs, dean of the Graduate School, and professor of English at the University of Maryland.