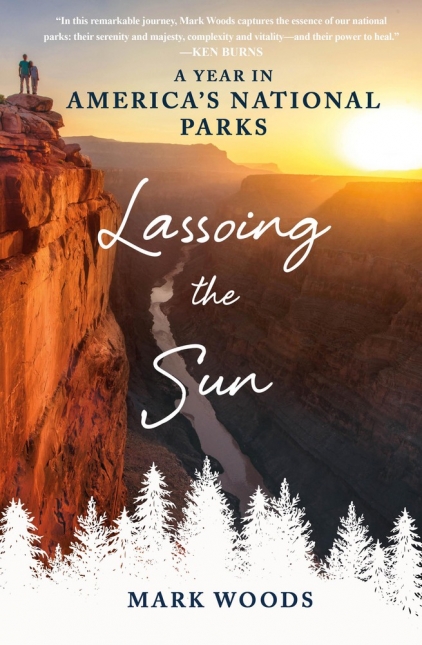 Travel books written around a theme — a hike following the path of Sherman’s March to the Sea, say, or a cross-country bicycle trip spent listening to bird songs — can be tricky things. If done with a light touch, with the author not stuffing too much into the casing, themed travel books give the reader a comfortable structure and continual focal point. If not, they can fall flat, or come across as contrived or artificial. (Sometimes such projects fall between those two extremes, as well.)

Mark Woods is a Florida newspaperman who won a one-year fellowship, allowing him to pursue a project of this choice. This year being the 100th anniversary of our National Park Service, and Woods having an abiding fondness, nurtured from his childhood, for our country’s parks, he decided to visit one each month, with each “symbolizing a different issue facing the national parks in the next hundred years.”

The resulting book is Lassoing the Sun, a nice mixture of the famous parks, the big daddies of the system (Yosemite, in California, and the Grand Canyon), and the lesser-known. The latter, offbeat and strange as they sometimes seem, have their own allure. The campground at Gateway National Park, for example, feels “post-apocalyptic” to Woods — no surprise, since it consists of 26,000 acres in the New York-New Jersey harbor, with the constant roar of jets overhead and, in July, when Woods went there, chock-full of mosquitoes. (There is a move to increase the number of urban national parks, Woods says, which was the rationale for this visit.)

It sounds awful, and three of the four Gateway photos that are included confirm that — graffiti, garbage, and decay near an abandoned airfield. But the fourth photograph shows Gateway’s saving grace — a lovely grassland, with a park ranger, Dave Taft, a native New Yorker who loves the place. Gateway shouldn’t be compared to Yellowstone, Taft tells Woods, but rather to what New York City might have looked like in the 1600s.

Indeed, for most or all of the parks Woods visits, he has a guide, either from the Park Service, or a devoted civilian, and these people give the book some human interest — pizzazz that it would otherwise lack. The sister of a man killed on Flight 93 makes Woods’ visit to the newly created National Memorial in Pennsylvania, and his description of it, a poignant one. Seeing her brother’s name scrolling along the bottom of her TV screen on September 11, 2001, Woods says, she thought, “[T]his doesn’t happen to our family. Our family is boring.”

And a fellow who guides Woods to something he calls “One Square Inch of Silence” in Washington’s vast and stupendously beautiful Olympic National Park, bringing along a “Jar of Quiet Thoughts,” is a bit of a kook (though, evidentially, a sincere one) who manages to irritate both the park’s rangers and the reader.

There was a lot going on during Woods’ fellowship year, and so there’s a lot going on in his book, maybe too much. He’s just turning 50, usually a time for some amount of reflection, if not angst. He has medical concerns of his own, including surgery. Most significantly, his mother is diagnosed with cholangiocarcinoma — bile duct cancer — in February, which, as Woods ruefully learns, is Cholangiocarcinoma Awareness Month. (The book is filled with weird cosmic coincidences, a few of which are believable.)

Woods’ mother was an outdoorswoman and a devotee of the national parks herself, so she’s a presence, in spirit, at each one he visits. (She died on June 30th, exactly halfway through his project.) And this could be said to fit in with a theme of the book — that “life leads to death and death leads to life.” (It’s an observation he makes about the reintroduction of wolves into Yellowstone: They kill elk but, in so doing, make the entire system of flora and fauna healthier.)

Nothing wrong with that, except that Woods overdoes it. In striving for the portentous, his tone often slides into the sentimental and lachrymose: “How do we hold onto a loved one when they’re gone?” he asks. “What pieces of them do we hold onto?”

And when a bird, a mourning dove, flies into the window and dies, just as the mother’s body is being wheeled out the door by the mortuary guys — well, a reader need not be especially cynical to wish Woods would stop trying to figure out what pieces of Mom to hold on to (among other difficulties, what would he do with the other pieces?) and get back to the hiking trail.

Our national parks are a wonder of our country, a source of pride for Americans of all political stripes, and we should celebrate both the people whose foresight led to their creation (Teddy Roosevelt, John Muir) and those alive today (rangers and civilians — maybe even the kooks) who keep them sacred. The subtitle of Ken Burns’ recent six-part film series on the national parks, “The National Parks: America’s Best Idea,” is hard to argue with.

Mark Gamin is a lawyer and writer in Cleveland.