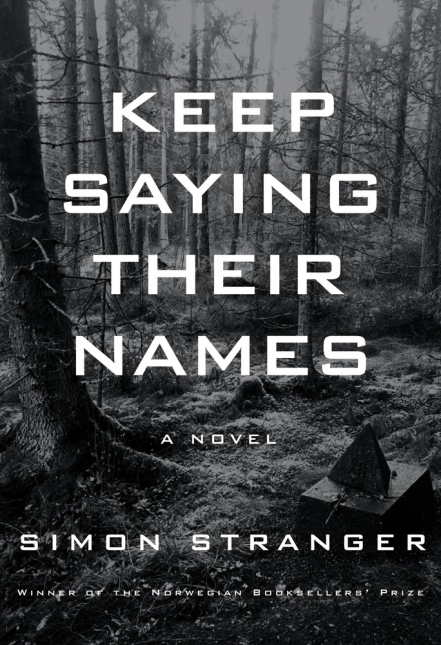 It all begins innocently enough with a family trip to Trondheim, Norway, where Hirsch Komissar lived at the beginning of World War II. Author Simon Stranger happens to be married to Komissar’s great-granddaughter, Rikke. During that visit to the town, Stranger saw Komissar’s name engraved in one of the thousands of Stolpersteine, a cobblestone cast in brass to honor Jews who perished during the war.

At the time, Stranger explained to his son the Jewish tradition of a man’s dying twice: First, when his heart stops beating, and again, the last time his name is read or thought or said. Thus, the cobblestones’ purpose is to remind Jewish people (and everybody else, by extension) of the fallen. By reading their names, they are kept alive.

Keep Saying Their Names mixes fact and fiction to tell several stories that interlace via shifting timelines and points of view. In this way, a mosaic is created.

The novel begins and ends with Hirsch’s story as he is captured by the invading Nazi army in 1942. But we also explore the life of the notorious Henry Oliver Rinnan, a real-life Norwegian national — eventually executed for war crimes — who sold his soul by working with Germans during the war, and who is believed to have been responsible for Hirsch’s arrest.

The man ran a Gestapo-like unit, code-named Lola, that first infiltrated and then betrayed the resistance. By the end of the war, Lola was operating a de-facto torture chamber out of a house in Trondheim that became known as the Gang Monastery.

In a twist of fate, it was the same house where Hirsch’s son, Gerson Komissar, and Gerson’s wife, Ellen, would come to live with their two daughters, Janicke and Grete. But this temporary residency has disastrous effects for Ellen, and, by extension, for her marriage, as she can’t reconcile the house’s past with her new life.

Janicke and Grete act out plays in the cellar — the same cellar that once witnessed countless screams and suffering brought upon by Rinnan and his gang.

A generation later, Grete’s daughter, Rikke, will marry Stranger, the novel’s author. This crafty autofiction fills in the blanks to reconstruct a plausible chain of explanations for how Rinnan, once an unremarkable boy, became one of his country’s most terrible traitors.

There are no chapter numbers nor titles in the book. Instead, in an ingenious trick, each section begins with a letter of the alphabet and a thought:

“A for accusation. A for arrest. A for all that will disappear and slide into oblivion.”

“B for building. In the decades after the war…”

And so forth, all the way until we reach “Z for zero hour.” This seemingly simple device must have been a real challenge for translator Matt Bagguley.

The changes of timelines and points of view in Keep Saying Their Names indicate a mastery of craft that echoes the late Gabriel García Márquez, for these shifts are never confusing nor jarring to the reader. The long sentences seem to fly by with an almost poetic melody even when touching serious subjects:

“The whole country was occupied, but up in the north he [Hitler] needed a way to restrict and control the shipping in the North Atlantic; a base where German cruisers could set sail from and destroy the British submarines and warships: isolating Britain, so that it truly remained an island, cut off, and unable to supply the resistance men on the continent with courage, ammunition, and machine guns.”

A writer must write. And so Simon Stranger used his skills to create this unique novel, to tell the story of his children’s heroic great-great-grandfather, Hirsch Komissar. May future generations speak his name.