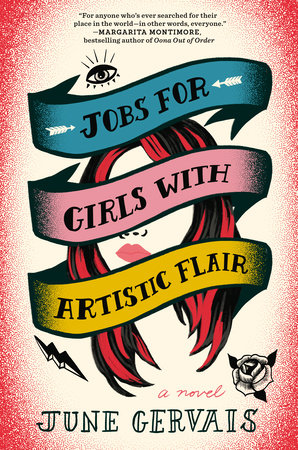 Getting a tattoo is an intensely personal experience. You’re handing someone else control over your body to hopefully make it look a certain way, match on the outside what you feel on the inside, or permanently memorialize connections or experiences. Suffice it to say, the world of tattoos in the mid-1980s was not the same as it is today. Back then, tattoos were limited to “disreputable” types, and there were virtually no female tattoo artists to speak of.

For Gina Mulley, who works in her brother Dominic’s Long Island tattoo shop, the artform is the one medium through which she can make order out of personal chaos, the one thing that provides a sense of stability. With an absent father, a mentally unbalanced mother, and minimal friends (minus the other tattooists at the shop), she has few social interactions.

Gina, class of 1985, has just graduated high school, and Dominic insists she find a job. But all she wants is to become a tattoo artist; she paints a huge mermaid mural on the wall of the shop and creates many of the “flash” tattoo designs customers love. She also has notebooks full of potential tattoos: hybrid mutant fish and images of fantastical animals and vegetables that exist nowhere except in her gifted brain.

Dominic reluctantly agrees to take his sister on as a one-year apprentice, gradually increasing her tasks until she reaches the level of being allowed to ink tattoos on pigs’ feet and oranges, if not human skin. During this time, Gina meets the local clairvoyant and his “protégé,” the lovely and mysterious Anna, and realizes that she needs more than work in her life. She needs romance, too.

In Jobs for Girls with Artistic Flair, author June Gervais allows us to watch events unfold from Gina’s perspective, and so we are occasionally frustrated by our protagonist’s misguided attempts to reconcile all the different pieces of herself into a cohesive whole. But we’re also amused at her and Anna’s flailing, awkward attempts to move beyond friendship to something more.

Throughout, the author takes the structure and tropes of a traditional bildungsroman and lovingly places them over this intimate circle of people, this single year, to show how even small conversations and experiences can shape a young life. It’s all even more beautiful when you realize the author has used a centuries-old structure to create a gentle, queer, feminist coming-of-age tale set in the little-explored world of 1980s tattooing.

True, the result is surely a niche Venn diagram, but such is Gervais’ skill that the tale will resonate with all kinds of readers. The artistry here — save for one jarring scene dealing with dubiously granted sexual consent — is deft, and Gina is an immensely likable if frustrating character.

She fights with everything she has to become a respected tattooist, to demonstrate her talent to the people who matter, and to have a successful romantic relationship. In portraying Gina’s journey, the author has crafted a sense of place so precise, you’ll all but hear the tinkling of the bell over the tattoo shop’s door as the novel welcomes you in.

Patricia S. Gormley recently moved to Alexandria, VA, from Miami, FL; she is still trying to understand “seasons.” She lives in NoVA with her librarian husband and five small, mysterious beings who claim to be cats but who behave like permanently disgruntled people.