Incarceration Nations: A Journey to Justice in Prisons around the World

Taking a hard look at the U.S. and other countries' ill-conceived embrace of confinement. 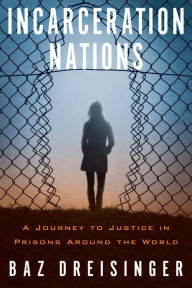 Baz Dreisinger devoted an academic sabbatical and a few extra weeks of vacation to touring prisons around the world — from Third World countries such as Rwanda and Jamaica to more advanced nations like Australia, Brazil, and Norway. In Incarceration Nations, she recounts her two-year pilgrimage against the backdrop of the growing debate within the United States over the policies of “mass incarceration” responsible for locking more than 2 million people behind bars.

The United States leads the world in putting offenders in prisons and jails. The U.S. incarceration rate of around 700 persons per 100,000 is 50 percent higher than Russia’s and three times as high as Singapore’s. U.S. prisons are overcrowded, but perhaps not the worst; with 35,000 inmates, Uganda’s prisons are overfilled to six times their capacity.

Dreisinger, founder and director of the Prison-to-College Pipeline Project at John Jay College of Criminal Justice in New York City, notes that the U.S. recidivism rate for released offenders is also high: around 60 percent. The numbers “don’t look much better” in the rest of the world, she says, but any other government program with a failure rate of 60 percent would be dismantled right away. Incarceration, she says, should be a last — not a first — resort to deal with those who commit crimes.

Long-term imprisonment is a relatively recent invention, Dreisinger notes — an Anglo-American policy that replaced such practices as shaming offenders in public stocks or sending them to penal colonies abroad (think Australia). European visitors to 19th-century America studied U.S. prisons and copied them back home despite Charles Dickens’ critical description of inmates subjected in U.S. prisons to “torturing anxieties and horrible despair.”

The United States continues to export prison policies, Dreisinger reports. The late-20th-century war on drugs that helped fill U.S. prisons beyond capacity has its counterpart in “draconian” drug sentences that similarly fill prisons in Thailand and other countries.

Brazil is one of several countries to have copied the U.S. model of ultra-secure “supermax” prisons, with widespread use of solitary confinement. Dreisinger interviewed one prisoner who had been in solitary for more than two years despite a stated limit of 360 days. “Rules change,” the prison guide tells her.

Norway has relatively liberal prison policies, but Dreisinger is told that U.S. news media and entertainment programs have helped increase tough-on-crime sentiment there. A poll in 2010 found a majority of Norwegians think sentencing policies too lenient.

Dreisinger teaches English at John Jay and won permission from the school’s president in 2011 to start a partnership with New York’s Department of Corrections to identify and develop inmate candidates for higher education. She visited prisons around the world armed with her teaching techniques and what she calls her “tenacious” optimism.

In Uganda, she led a two-hour creative-writing class with inmates who had been given a Maya Angelou poem and then tasked to write their own.

“AIDS, oh AIDS, why have you taken my family?” one of the poems begins. Upon leaving, Dreisinger wishes her host, an inmate turned prison pastor, a good night’s sleep. “It is never a good night here,” he tells her. “And there is no room for sleep.”

Dreisinger believes in the benefits of so-called “bibliotherapy,” as documented in at least one academic study: an increased ability to explore values, bolster self-esteem, and foster empathy. But she worries that in-prison classes such as hers are merely a distraction, a Band-Aid on an amputated limb.

The United States does not fare well in comparison with policies in other countries. In Singapore, the prison system concentrates on finding a place for offenders after their release despite the country’s “allegiance to punishment.” The recidivism rate is about 25 percent, less than half the rate in the United States, where job-placement programs in prisons are seriously oversubscribed and underfunded.

Dreisinger applauds a “restorative justice” program in South Africa that calls on prisoners to address their victims directly or at least imagine what they would say if they had the chance. The process builds empathy for the victim and self-awareness for the prisoner, but is unheard of in the United States.

Back in the U.S., the author takes encouragement from the growing sentiment for sentencing reform even among right-wingers. She complains, however, that some prison reformers are motivated more by financial than moral concerns. “Doing the right thing for the wrong reason is not the path to lasting change,” she writes.

And reform in the United States is not enough. “We’ve exported a bereft system to the world,” she concludes. Quite simply, the system does not work, nor could it be expected to.

An emotional look at one woman's complex relationship with sustenance.