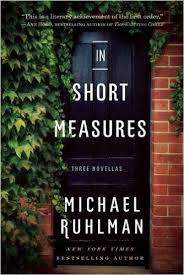 In three emotionally charged novellas, Michael Ruhlman paints a complex portrait of love — both how a first love can cast a long shadow over the rest of your life and how an enduring one can push you past boundaries in order to protect your relationship.

In the title story of In Short Measures, Grimsley Feller, whose unfortunate family name has been passed down through generations, finds her life upturned by the reappearance of a college boyfriend. Having structured her life to be as tidy and drama-free as the rare books she curates at Duke University, Grimsley is flummoxed by her ex-lover's presence on campus after the death of a beloved professor. And even though her old fling is now happily-ish married and working in Hollywood as a scriptwriter, he, too, seems deeply affected by the flurry of "what-ifs" that descend upon them as they reconnect.

Grimsley is a delightful narrator, full of observations about the world and frank and earnest about herself. On aging: "You ever doubt life can be hard as bad weather on some people, go to that high school reunion." On fate: "I've always accepted I wasn't put in this world for any greater purpose than daily constancy to the people around me." On what others think of her: "Anyone who judges me harshly for what I choose to do with my own body can sit on a corncob."

The story unfolds as delightfully as the tales in the books with which Grimsley spends her days. The relationship between her and ex-boyfriend Emerson (of course his name is Emerson) is also entwined tightly with a love of literature and words. When Emerson wrote fiction in college, Grimsley was always his first (and sometimes only) reader. And her memories of — and experiences with — him cannot be separated from the works they both love.

"That kiss was like opening a long-lost book of poems to your favorite one and finding your old self responding emotionally to the words exactly as you had in your passionate, poetry-loving youth, but with a freshness and perspective you'd then lacked," she says.

While love lost is the subject of the first novella, in the second, "Strong Conspirators," a couple fights fiercely to keep their family together after a horrible accident one snowy night. In the simple act of driving his son home from a neighborhood Christmas party, Frank Markstrom hits a woman walking in front of his house and kills her.

A tragic event, sure — except he'd had one too many that night, and the police lights are coming down the road. In a split-second decision that turns the family's life around forever, his wife, Karen, tells the police she was the one driving.

Legal, emotional, and psychological complications abound in this taut story. This is not a casual thriller, though — Ruhlman makes each and every step weighty. He shows the unraveling of an ordinary family going through the paces, the parents at a place in their marriage where they’ve ceased to really look at each other, where menial tasks become the subject of petty arguments (Frank: "Karen why don't you simply fill the bowl up to the top with water to make it easier to clean?" Karen: "How about a 'Hello, I love you, dear?’").

The enormity of the accident overshadows what could have been the subject of another novella entirely: Karen's discovery of a lipstick-smudged handkerchief in Frank's pants pocket the morning after the incident. Ruhlman drops that possibility of infidelity here like a breadcrumb in a fish-filled lake, but readers can only imagine where it might have gone.

"Sally Forth" is the final (and most meandering) of the novellas. I found myself a little dizzy at points as the narrative jumps from present to past — sometimes decades from paragraph to paragraph. In the story, Scott Carpenter has a chance meeting with an old friend and lover on a New York City street, and that meeting prompts him to reminisce about their former relationship and the dramas it contained.

Nostalgia is prominent here, and the ways small hurts — and even small victories — can drive a wedge between people over time. It is the quietest story of the three, and also the most devastating, because it speaks to a feeling we can all relate to: the passing of time, the quickness of life, and the ways the past come back to haunt us.

(By the way, another similarity I found…inspiring? Many of Ruhlman’s characters are having really great sex.)

The theme of love in all its tragic and glorious forms resonates most. Even after spending only 100 or so pages with these characters, you leave with a sense of having known them forever, of a complete, though sometimes unsettling, shared intimacy that one might assume to be solely in the realm of expansive novels.

In that way, Ruhlman dispels the notion that novellas don’t allow for a well-developed narrative. In Short Measures is rich, textured, and carefully constructed not only for surprises, but also with a powerful love of language and description throughout.

Tara Laskowski is the author of Modern Manners for Your Inner Demons and the short-story collection Bystanders, which will be published by Santa Fe Writers Project in 2016. She is the editor of SmokeLong Quarterly and earned an MFA from George Mason University. She lives, works, and writes in the Washington, DC, metropolitan area.