If You Leave Me: A Novel

A riveting story of star-crossed love set against the turbulence of the Korean War and its aftermath. 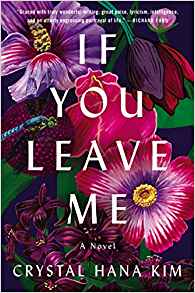 Although If You Leave Me is set in war-torn Korea, the novel mainly concerns itself with love — romantic love, love of country, love of family, and, ultimately, the inability to love on command.

We first meet two of the three protagonists — for this is a love triangle that frequently morphs into other shapes before snapping back into place — as teenagers waiting in uneasy stasis for the war to reach them.

Haemi Lee is a feisty young girl who risks scandal by dressing as a boy for frequent, clandestine outings with her childhood friend, the mysterious and handsome Kyunghwan. They ride bikes to bars at night; they get drunk; they flirt; and they play mind games with one another — stupid, thoughtless mind games that will come back to haunt them throughout their lives.

Poverty, hunger, disease, and, most of all, the relentless miasma of fear, permeate the atmosphere — so much so that after a while they become the new normal. But humor, kindness, and acts of generosity also bubble up amid the daily grind as the war looms closer and the friends struggle to make decisions whose repercussions they are too young to foresee.

Should they stay or should they go? Should they fight or should they keep their heads down and wait for peace? Most notably, should Haemi, who must choose a husband, accept Kyunghwan as her fate, or should she say yes to her other suitor, Jisoo, who offers a life of security and comfort?

These are weighty decisions in any time of conflict, but they are especially tricky with only gossip as a source of information about the war, as Haemi recalls:

I remembered it too clearly. The day we learned of Seoul’s fall, Hyunki and I had been catching grasshoppers. Mother ran to us with her hanbok skirt clutched in one hand...The Northerners had crossed the thirty-eighth parallel two days before. The Chinese were with them. No, the Soviets. No, both. Whoever they were, they were Reds. Seoul had fallen in less than an hour. Our country would be reunited. We would be killed. The hysteria was contagious, congested with too many emotions. I didn’t want to catch their panic, didn’t want to understand.

As sometimes happens, once the drama of the war recedes and life in a newly divided Korea takes on a semblance of normalcy, the trauma in the main characters’ lives moves inward. Haemi struggles to be satisfied with the life she has chosen. Her innate feistiness resurfaces, much to the irritation of her domineering husband, who seeks to impose his notion of a proper woman’s role on her:

Despite the sympathy the reader is likely to feel for Haemi’s situation, she is also a difficult character to like, and the author makes no apology for that. Haemi doesn’t behave. She breaks the “mommy rule” by putting her happiness ahead of that of her children. She is spiteful to passersby.

In short, she sidesteps the stereotype of the spunky heroine who overcomes her circumstances to find happiness in the face of overwhelming odds. Instead, the author relies on lyrical and nuanced storytelling to avoid these tropes in favor of the portrait of a complicated woman.

Meanwhile, Kyunghwan’s story is compelling in its own right, as he struggles to grasp even the slippery lowest rung of economic stability. Will his clandestine studies win him a place at university? Will he succeed in keeping Haemi’s beloved little brother away from political demonstrations and out of harm’s way, and, most of all, will he allow himself to find love with someone new?

Or, somehow and against all probability, will these two star-crossed lovers finally find each other across the universe, and will their reunion set their tilted world aright? Or will they, like their new country, be forced to stumble into an uncertain future?