If I Understood You, Would I Have This Look on My Face? My Adventures in the Art and Science of Relating and Communicating 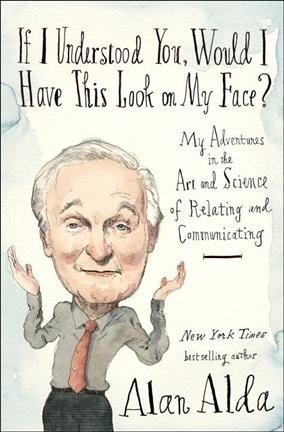 Physicist J. Robert Oppenheimer led the World War II team of scientists that created the atomic bomb. After two of those bombs were dropped on Japan, killing an estimated quarter of a million people, Japan unconditionally surrendered, ending the war.

Sobered by atomic energy’s destructive potential, Oppenheimer became an evangelist for international control of the force he helped create. He also realized that citizens of a self-governing society like the United States could not make sound voting judgments about the use of atomic energy without understanding both its benefits and risks.

In April 1958, Oppenheimer addressed a worldwide conference of journalists with this message (which I’m paraphrasing for brevity): We’re entering an era of incredible scientific discovery. There’s no more important mission for journalism than to bridge the gap between science and the general population. Otherwise, how will people know what’s in their best interests and vote to make rational choices?

Oppenheimer’s speech was published in Harper’s magazine. That’s where I came across it. It inspired me to become a journalist.

To introduce this review, I’ve recalled the Oppenheimer story, and personalized it, on the advice of actor Alan Alda. No, Alda didn’t contact me personally. But in his new book, If I Understood You, Would I Have This Look on My Face?, he makes the case that a compelling story, and personalizing one’s message, are two keys to better communication.

We know Alda as a gifted actor. But there’s also a lesser-known Alda, one with a lifelong love of science.

To fully appreciate this book, read it as an extension course of the Alan Alda Center for Communicating Science, located in the journalism department at New York’s Stony Brook University. Since Alda founded the program in 2008, the center has taught communications theory and techniques to thousands of journalists, scientists, health professionals, and policy-makers.

Reflecting Alda’s persona, the book is bright, breezy, and upbeat. Its voice is as friendly and reassuring as that of Hawkeye Pierce, Alda’s character on the iconic TV series “M*A*S*H.” In writing this book, Alda follows his own advice: Communicate through storytelling. He tells stories of the improv exercises that transformed reluctant scientists into intelligible speakers. Other exercises evoked empathy and helped bridge lecturer-audience gaps. He relates experiences from his acting career that can be applied to everyday communications.

The acting, performing, personal side to better communications is the “sugar” that makes the medicine of the book’s research go down more easily. And there’s a lot of research to digest, including information about the “reading the mind in the eyes” test and the “Stanford study on synchronous marching.”

The book has 13 pages of index referencing mostly scientists and research projects. Don’t be deterred. The mission of the Stony Brook Center is to make otherwise hard technical slogging accessible. Alda achieves that here. It’s a role for which he has had considerable preparation.

After filming the last episode of “M*A*S*H,” Alda spent 13 years as the host of the PBS show “Scientific American Frontiers.” In that role, he interviewed, unscripted, some of the world’s leading scientists and technicians, teasing out language the rest of us could understand. In many ways, If I Understood You has the feel of a transcript from that show, focused entirely on methods of better communication.

Alda’s intentions are admirable and important, but he has embarked on an extraordinarily difficult quest. How difficult? Recently, New York Times science writer Claudia Dreifus covered the annual meeting of the American Association for the Advancement of Science where Alda made his case for using plain words to describe complex topics. According to Dreifus, Alda’s speech was so successful that the usually staid scientists in the audience gave him “a hooting, hollering, foot-stomping ovation.”

“The next day, however,” wrote Dreifus, “at the various panel discussions I saw speakers deploying language so dense that only others in their discipline were likely to understand them…It was depressing, especially when one realized that the very researchers mumbling jargon had recently been cheering Mr. Alda’s call for clarity.”

Here’s another way to assess how long a road it is to achieve general scientific literacy: In 2016, American voters elected a president who rejects the science behind climate change and questions the evidence that vaccines do not cause autism.

Technically, Alda’s latest work is a communications how-to, joining countless other books designed to help individuals speak more successfully in business, politics, and various professional situations. But as an introduction to the work being done at Stony Brook, it deserves much more attention.

Robert Oppenheimer was concerned about a democratic nation’s understanding of the promise and risk of nuclear energy. More than half a century later, that problem remains. Add to that concern today’s advances in science that are literally changing evolution through gene editing, the development of artificial intelligence superior to the best human brains, and breakthroughs across a vast array of disciplines that few, except those directly involved, can understand.

As a surgeon on TV, Alan Alda saved countless fictional lives under impossible battlefield conditions. In real life, one hopes he can be as successful helping us all understand the forces shaping our future.

For more than 30 years, Joe Rothstein developed media and strategies for political candidates and causes as a professional consultant and media producer. He is author of the thriller The Latina President and the Conspiracy to Destroy Her. He also writes weekly opinion columns for the website USpoliticstoday.com.