I, Ripper: A Novel

Jack's back in this gripping, grisly tale. 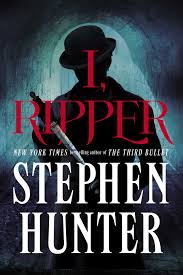 It is surely a daunting task for a writer to present his audience with even one original first-person narrative novel — one character’s tone of voice, viewpoint, actions, and feelings. In his latest novel, I, Ripper, Stephen Hunter gives us two such narratives, each circling the other until they collide in a tense and explosive confrontation.

Set in Victorian London, Hunter’s tale is a spirited retelling of the so-called Fall of the Knife: August through November 1888, when an anonymous serial killer dubbed “Jack the Ripper” stalked the streets of Whitechapel.

The book alternates viewpoints with each chapter: One voice, the fictional memoir of a journalist, “Jeb,” investigating the murders; the other is the imagined diary of Jack himself. While this narrative hopscotch occasionally makes it difficult to follow the timeline of the story, it also gives readers a sort of double insight into the case, allowing them to see both an insider’s and outsider’s perspective at once.

Hunter has given us a likeable and relatable protagonist in Jeb, a novice reporter hoping to catch his big break by covering, and perhaps ultimately solving, the Jack murders. We know little about him personally, but that is perhaps the point: With limited background information on the character, we are free to focus completely on his wry and misanthropic yet somehow optimistic style of expressing himself.

Waiting with a throng of other journalists to speak to a policeman at the first crime scene, he reflects, “The holy grail of the whole frenzy seemed to be acknowledgement by an inspector, which would represent something akin to papal audience.”

The book does a magnificent job of drawing its audience into the time period, largely through its use of language. When a man trying to rob Jack observes “a guv’nor like ’im calling a blackguard like me ‘sir.’ Who’d a seen that one coming?” we can picture the scene in all its dark absurdity (not least when we learn what Jack does next).

When Jeb strolls through Whitechapel and reviews the noisy scene — “So much frenzy, so much throbbing, so much shove and slip and shuffle, everywhere, everywhere” — the surging hurly-burly of words makes us feel as if we, too, are wending our way through the crowded warren.

Occasionally, Hunter’s desire to educate his readers feels clumsy. In one of Jack’s chapters, the Ripper relates, “I found myself 1,570 paces to the west, on Aldgate, that being the same concourse as Whitechapel High Street, but having moved from London to the city, it had acquired a new name, as well as a new municipal government and police force.”

Given that this is a diary, and that in the previous paragraph Jack has written that he anticipates no readers, it seems unlikely he would include this level of detail about his own city. The information may be interesting to history buffs, but it somewhat breaks the flow of the narrative.

Hunter’s portrayal of characters both minor and major, on the other hand, seems effortless — although, of course, it is not. Policemen, prostitutes, Jeb’s journalist colleagues and professor friend, and Jack himself are all beautifully fleshed out, even if some appear only rarely. In particular, the author’s descriptions of the victims through both Jeb and Jack’s eyes give them a humanity that they have often been denied in retellings of the horrific crimes.

The crimes themselves — being the crux of Jack’s chapters — constitute almost half the book. They are not for the squeamish. Hunter relates them in minute detail, drawing from case history but lending his own touch, as well. Sentences such as “The flesh I sliced off her thighs and abdomen went to the table, where it lay like long shreds of cheese drying in the sun” are enough to make any reader grimace, but they don’t feel forced. Hunter doesn’t shy away from gore, but, then, neither did Jack. (Still, readers might want to put down the cheese before reading.)

It’s the rare mystery that can lead up to a climax without giving away at least part of the ending, but Hunter pulls it off brilliantly. Perhaps it’s the dual narratives that keep readers guessing. Perhaps it’s the cases themselves, which, in reality (as in this novel), are complex and disturbing.

Or perhaps it’s that Hunter does such a good job of placing us in the era that we feel that we, like Jack the Ripper and Jeb the journalist, are wandering the streets of Whitechapel, waiting on tenterhooks for the next attack. Whatever the reason, readers will find that the wait is worth the while.