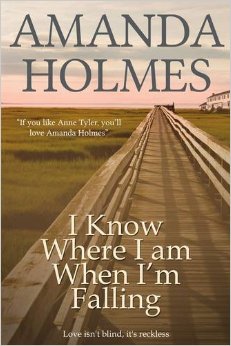 The quest to find truth is often thwarted by the deep-seeded desire to avoid it, especially if that truth could destroy love. This is the dominant theme woven through Amanda Holmes’ vibrant novel, I Know Where I am When I’m Falling.

The novel opens with a teenage Ruby Lambert in the vividly drawn 1970s. She lives with her devout Christian parents, Nora and Timothy — a play director and ethics professor, respectively — and her three siblings, Lydia, Freddy, and Sorrel. The Lamberts live a mile down the road from the wealthy Aleshires and their handsome adopted son, Angus, in Hingham, Massachusetts.

Though they are practically neighbors, the Lamberts and Aleshires only seem to encounter each other at church, where Ruby and Angus begin their relationship. The two initially bond over their love of music. Angus seems to be a smart, grounded teenager — until he begins getting into trouble and is sent to a boarding school. This instance is the tipping point toward Angus’ complete destruction and Ruby’s fight for him.

Angus then gets kicked out of the boarding school. When the Aleshires refuse to absorb him back into the fold, Nora and Timothy agree to take him in. Ruby is enamored with his danger and intelligence, and late one night, he tells her that he loves her. Angus seems to be determined to get his life back on track at first, but when Nora and Timothy catch him in possession of marijuana, they kick him out. He is eventually arrested and sentenced to jail in Arizona. While Angus serves time, Ruby travels abroad, studies, and writes, but she is never truly separated from Angus’ influence because he writes to her.

Ruby is living in Boston and working in a bookstore, when during a vacation to her family’s home in Hingham, Angus appears. Unable to resist each other, Ruby and Angus get married, but the relationship does nothing to stop Angus’ behavior. As in the beginning chapters, he seems to swing on a pendulum between better and worse, the only constant being Ruby’s steadfast love and support.

Angus is a true pathological liar and kleptomaniac. At one point, as he and Ruby traverse the country in a stolen RV, he admits this by saying that almost everything he says is a lie. This confirms Ruby’s suspicions about a mysterious warehouse, several luxury cars, and the truth about her engagement ring supposedly given to him by a grandmother. Their relationship suffers tremendously, ultimately exploding when Angus is charged with an art heist. Ruby questions her commitment to him, and in doing so, realizes that she’s been hiding from the truth all along — that Angus will always be a compulsive liar and will never transform into the sensitive, smart man she thought she once knew.

At first, the pacing is a bit slow, mostly as a result of the reader acquainting themselves with secondary characters outside of Angus and Ruby’s story, but as the plot progresses, this is remedied. The relationship between Angus and Ruby is artfully done, though, at times, the reader becomes a bit weary of Ruby’s unquestioning loyalty to a man who is clearly endangering himself as well as her. Even her parents, siblings, and friends give him the benefit of the doubt too many times, only at the end encouraging her to sever ties. Regardless, Holmes paints a vivid picture of the dysfunctional relationship — one that echoes the sharp then dull pain of a real-life struggle.

The carefully woven complexity of Angus and Ruby’s relationship mostly makes up for the sometimes abrupt scene changes, and reaching the final chapters, the reader is truly sorry to find the story concluding, wondering: What will happen to Angus? Will Ruby continue to love him? Will he finally change? At the end, Holmes weaves the threads of Angus and Ruby’s relationship together in a satisfying conclusion that leaves the reader echoing the Bible verse referenced throughout the novel, “be wise as serpents and innocent as doves.”

Joy Callaway is a women’s historical fiction writer. She is obsessed with American history — especially the Gilded Age and the American Revolution. She lives in North Carolina.