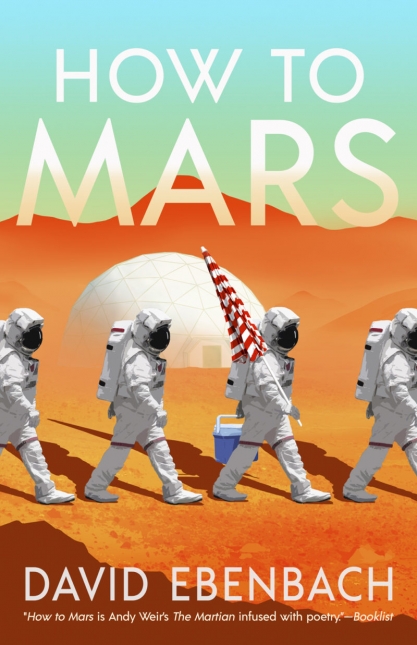 “Learning to coexist is the spice of quarantine life.”

This recent tagline from a local magazine might also encapsulate David Ebenbach’s How to Mars. Combine the quarantine with NASA’s rover- and helicopter-powered Martian exploration, and the timing couldn’t be better for this book.

Too bad the book isn’t better.

The premise is great. Six scientists and engineers — three men and three women — volunteer for a one-way mission to Mars, filmed as a reality show. Once settled on the red planet, despite all of them having had their various tubes snipped and tied, and under strict orders not to have sex, one of the women (Jenny) gets pregnant.

It’s fertile ground for a story, and the book launches right into it. But I grew frustrated and then fundamentally stuck. The central conflict isn’t addressed. Jenny gets pregnant, and Josh, one of the men, is the father. That’s no mystery. They’ve been flouting “strict orders” for quite some time.

What remains mysterious is why everyone treats this as an occasion for unadulterated mazel tovs. No one considers that perhaps abstinence makes sense in this environment. No one worries that two of six voyagers engaging in a sexual relationship might hurt the group dynamic. No one calls Josh or Jenny selfish, suggests they exercised poor judgment, broke a shared compact, or are putting themselves and others in danger. No one even worries at any length about the pain and suffering a child growing up on Mars might endure.

The only one who’s not foaming at the mouth to put on a party hat and help Jenny with her Lamaze classes is fellow voyager Stefan. Solely for this reason, he’s the bad guy.

Ebenbach lays it on thick so readers will hate Stefan. He’s gruff and grumpy. He has weirdly adolescent ideas about anarchy. The segments told from Josh’s perspective are close “I,” while Stefan’s are a distant “he.” We learn that Stefan once, in a fit of temper, broke two of third-guy-on-the-voyage Roger’s fingers, which Roger surely didn’t deserve…even if he is Canadian.

Stefan hears weird voices in his head, which might be aliens or just another sign of his weak-mindedness. (This is never definitively resolved.) Ebenbach even indicates that Stefan possesses the worst, most utterly, irredeemably reprehensible personal characteristic any human being in contemporary literature can possibly have: casual racism. Never actually manifested, but we’re told it’s there.

Honestly, I felt bad for Stefan, whose real crime seems to be that he’s an introvert. I wonder if he grew jealous watching “The Martian.” At least the Matt Damon character is left alone.

Even less likely than Jenny’s pregnancy, most of the voyagers have become bored with science since arriving on Mars. They sit around all day looking at their tablets like my 6-year-old daughter on a rainy Sunday. Maybe they should read Susan Cain’s Quiet because — as an introvert myself — they sound like hellish companions, who expect you to endure their vapid pop music, play Twister, and help decorate the cabin for the baby shower you don’t feel like celebrating. Then loathsome Josh, a psychologist, asks how you’re feeling about it all.

When you retreat to the spaceship for peace and quiet, as Stefan does, you’re forcibly returned to the habitation and admonished that you are being dangerously selfish by withholding your expertise from the group.

Alanis Morissette called, and she wants her irony back. In over 200 pages, it never occurs to anyone that Josh and Jenny are the selfish ones.

While I pity him, Stefan’s no hero. Even he fails to mutter anything about Jenny and Josh’s irresponsibility. The core of the conflict goes unstated, unaddressed, and unresolved, while Stefan is raked over the coals for being something less than an eager beaver about the whole baby-on-Mars thing. While it might be uncharitable for me to have wished for Stefan to go bonkers and kill them all one by one, or at least break a few more fingers, it sure would have made this a more satisfying read.

What kind of people would volunteer for a mission like this? Readers are given some inkling as to why a few of them thought it would be a good idea: Josh, for instance, lost his fiancée, and Jenny’s bipolar sister committed suicide. But even with the reality-show aspect, these are scientists and engineers pledging to live in a hostile environment ‘til death do they part. I’d expect personalities more “Europa Report” than “Jersey Shore.”

For poor Stefan, it’s cruel irony, traveling nearly 200 million miles only to be treated like he has a problem for wanting alone time. People complain about quarantine being isolating, but it depends on who you’re stuck with.

At least here on Earth, the quarantine will end.

The Day I Died: A Novel

This psychological thriller unravels the mystery of a disappearance and the inner-workings of one woman’s mind.