How to Live. What to Do: In Search of Ourselves in Life and Literature 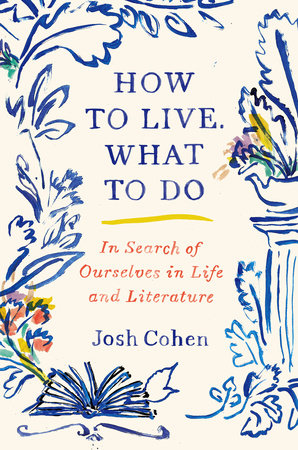 Let me take a wild guess: You read pretty regularly, and while you may not put it into quite these words — or quote Wallace Stevens at all, like the author does in his title — you look to books for answers to questions about how to live and what to do. And that makes you an excellent audience for Josh Cohen’s latest study.

A psychoanalyst based in London, as well as a professor of modern literary theory, Cohen seamlessly blends his two vocations in How to Live. What to Do to examine a number of books that address the questions implied. The twist is that he does not (for the most part) turn his psychoanalytic eye onto the books themselves, as a Freudian critic might, but instead mines them for therapeutic insights.

Arranging the works chronologically, he assesses the challenges of growing up and growing old through the experiences of a range of fictional characters. And while he decries the loss of distinctive individuality in self-help books, he has nonetheless produced a readable, thought-provoking, and, yes, helpful treatise on how to navigate life with the aid of good literature.

From Alice of Alice’s Adventures in Wonderland and Through the Looking-Glass fame, Cohen shows the importance of play during the phase of childhood in which the barrier between reality and fantasy is permeable. While Alice’s escapades are full of silliness and the baldest fabrication, they offer her a sense of control and a place of psychic refuge from the sometimes-frightening real world. Cohen then explores how these lessons inform his own work with patients, giving as an example one man who never learned to pretend or goof around and now has trouble initiating and sustaining adult relationships.

Cohen complicates that notion with Scout Finch from Harper Lee’s To Kill a Mockingbird, for whom play takes on much more serious dimensions. Scout is allowed, indeed urged, to use her imagination — her father preaches the power of walking around in another man’s skin — and that act of imagining teaches her compassion and individuality. She doesn’t need to become the kind of limited, bigoted adult she has so often been exposed to; she can imagine a different kind of grownup.

Entertainingly, Cohen opens each section with mock interview notes, as if the character we’re about to parse had just completed an analytic session. So before entering into the discussion of Jane Eyre and characters’ reactions to school, we learn “JE” has shown signs of “emotional and material deprivation,” but also exhibits “resilience and defiance.” And that, in a later section, Dorothea Brooke from George Eliot’s Middlemarch is a candidate for antidepressants, although she turned them down “haughtily.”

The lessons about resilience that Cohen garners from Charlotte Brontë are challenged by what he learns from James Baldwin’s Go Tell It on the Mountain and Kazuo Ishiguro’s Never Let Me Go. While these novels appear to have little in common, Cohen examines them as studies in rebellion. Johnny Grimes, Baldwin’s protagonist, may be trapped in a society focused on diminishing him, but he maintains hope for the future. The young people in Ishiguro’s frightening dystopia likewise require resilience, although of a different kind. Placing these characters next to each other leads Cohen to the idea that rebellion is only possible in an environment in which change, too, is possible.

The life lessons he extracts get more complex as the issues themselves grow more complex, and he groups characters in sometimes surprising ways to make his points. For instance, Esther Greenwood of Sylvia Plath’s The Bell Jar isn’t the usual poster child for ambition, nor do I think of her in the same category as Jay Gatsby from F. Scott Fitzgerald’s masterpiece. Yet Cohen has them both offering valuable lessons on aspiration and the importance of choosing proper goals.

His interesting, intricate reflection on married love focuses on Middlemarch’s Dorothea Brooke, Isabel Archer from Henry James’ Portrait of a Lady, and Will Brangwen from D.H. Lawrence’s The Rainbow. Through them, he explores — quite romantically — the balance of knowledge and mystery vital to marriage. From there, Cohen moves onto middle age, growing old, and facing death.

As might be expected from a clinical practitioner, his approach to aging is decidedly upbeat. When he looks at Virginia Woolf’s Clarissa Dalloway, John Updike’s Harry Angstrom (from the Rabbit novels), and even the not-fictional Walt Whitman, he sees figures demonstrating the potential for happiness and growth extending to the end of life and even beyond.

One could argue that there’s nothing profound in How to Live. What to Do; Cohen offers no intellectual fireworks, no revisionist interpretations. Readers won’t be surprised that Alice is a model of creative play, that Jane Eyre’s harsh childhood prepared her for womanhood, or that Isabel Archer’s careful decision-making isn’t a path to love.

But that’s beside the point. The books assembled here aren’t guides, and Cohen’s engaging, sometimes moving volume isn’t self-help. And you wouldn’t need them if they were. If you’re curious enough to read at all, he concludes, you already have what it takes to live. As I’ve passed through the life stages he examines — and see the final one coming into ever-sharper focus — I, too, have looked for lessons in literature along the way. Josh Cohen offers a persuasive defense that it’s been time well spent.