A high-school football player tempts disaster with his love of the game (and the trauma that comes with it). 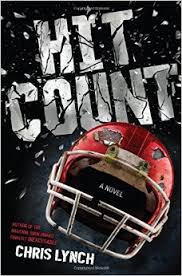 After reading Hit Count by Chris Lynch, I wanted to kiss the head of my STEM-loving 15-year-old son, who likes to watch football but has never been a player. Hit Count is a tough-love YA novel from an award-winning author about the personal stakes involved with high-school football.

Told from the first-person perspective of Arlo Brodie, the novel is divided into the four years of high school, with each year — freshman, sophomore, junior, and senior —showing the progression from junior varsity to varsity football and the ever more brutal head injuries inflicted — and suffered — by Arlo. There has been much in the news about the effects of concussions that teens suffer on the athletic field and about the tragic brain injuries endured by many retired NFL players, and Hit Count is certainly a worthy young adult fiction addition to the discussion.

The novel opens with Arlo commenting on his older brother, Lloyd, also a high-school football player, though destined never to be the top player that Arlo evolves into by the middle of the novel.

Lloyd, his younger brother’s counterpoint, proclaims at the opening, “All I ever wanted to do was hit people, is that so bad? Does that make me a bad guy?” As Arlo points out, his brother isn’t trying to be funny. In a sad but prescient turn of events, Lloyd does not get anywhere near his dream of being a professional football player; he’s “career jayvee,” never moving up from junior varsity to varsity.

Even as we root for Arlo to succeed as a linebacker, Lloyd — off the team, plagued by blows to his head, abusing drugs, and his life spiraling out of control — haunts the background to his brother’s story.

This story is focused on the game, and even more so, on the hit, on the tackle, on all its physical and psychological ramifications. Early on, Arlo’s coach instructs him that success is not about just bringing players down. If Arlo wants to succeed he must “Knock them down. Smack them down. Drill them down. Break them down. You want them to remember you, and to flinch whenever they do.”

What’s lacking in this book is some alternative adult perspective to the coach’s, and I say this knowing full well that teens do not want adults preaching to them in books, or in life. But Arlo and Lloyd’s parents are vague entities, perhaps as vague to the reader as they are to their sons.

One key data point about Arlo and Lloyd’s mother: She has a file on head traumas, on the details and descriptions of concussions and subconcussive hits, a file her sons think of as a joke. His parents do not regularly attend Arlo’s football games, or seem to revel in his prowess as a star player, but neither are there any scenes in which they argue about grades or college football scholarships or his future.

Even Arlo’s girlfriend, Sandy, can’t complete with his love for football. For him, the game is all there is. And that’s what the reader gets, one hit after another, each more brutal, until we lose count. He loves the game. “When I blasted the competition with the perfect violence of a vicious clean tackle like that … it altered me, made me better, stronger. My head exploded with the impact, because of the physical jolt and because of the crazy rush of power that came over me.” He wants to do it again and again. The language is vivid, muscular, and immediate. We want him to hit again, too, even as we see the inevitable end.

As I approached that end, I wished one other thing for this novel: a more informed and nuanced approach to the setting and other football players. It’s a New England town without distinctions; everyone who comes in contact with Arlo seems to be white and roughly middle class. His girlfriend’s family might be a bit better off — they have a vacation home on Nantucket and there are a few scenes set there in which Arlo feels out of place, which to him means being far from his normal, rigorous workout and football fields.

Maybe this novel could be set anywhere in this football-loving country, but I suspect the game is more a way of life in some parts than in others and that it is more diverse, layered, and complicated than is portrayed in this novel.

Eventually, Arlo briefly attempts another sport involving poundings and pummels, and this offers a less than satisfying resolution to the novel. There don’t seem to be any champions, much less winners, in Arlo’s new venture. Hit Count pounds this point: football is life, no matter what the stakes. But when there is no football? There seems to be little hope.

Hit Count takes a much-debated topic and turns it into a heart-pounding, entertaining young adult read. If I had a middle-grader or young teen interested in playing competitive sports, would I recommend this book to him or her? Absolutely. I would encourage the parents of teenagers to read it with their kids and discuss. But that said, I go look for my own son, and finding him at his computer doing homework, I just give him a big hug.

Caroline Bock is author of the critically acclaimed young-adult novels Before My Eyes and LIE.