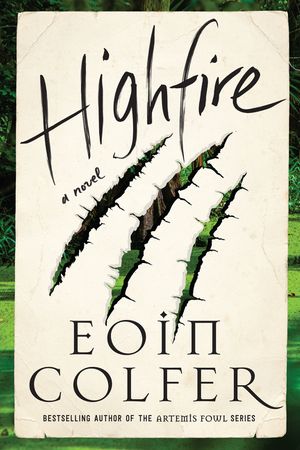 Highfire, the latest effort by Eoin Colfer, is a (literally) high-flying adventure wrapped in a fantasy, with a hint of police noir thrown in for good measure. The author, primarily known as a children's book writer and creator of the Artemis Fowl series, lends his craft to a more adult effort here.

The story is as old as time: the adventures of a boy and the animal he runs with. In this case, though, the animal isn’t something pedestrian like a dog; it’s a dragon whose glory days are long past. And it’s not so much love that binds the two, but a mutually beneficial business arrangement.

You see, Squib, a Cajun lad, helps procure booze and other fun items for Vern, a bayou-dwelling dragon. In return, Vern agrees not to burn Squib to a crisp. Certainly a fair trade. Of course, as with all such tales, what begins as professional respect turns into admiration and even friendship.

Throw in an equally fantastical demon named Waxman; a local businessman who provides food and drink for those in the swamp; and a corrupt constable with an ironically noble name (Regence Hooke) for our heroes to unite against, and you have the makings of a thrilling novel.

Highfire is infused with witty touches throughout. Vern may be a dragon, but he is truly Everyman — he loves his vodka, Netflix, and the movie “Flashdance,” the latter of which he commemorates by sporting a T-shirt featuring the iconic Jennifer Beals pose. (Don’t we all?) And, like most of us, Vern simply wants to be left alone with his vices.

The evil Constable Hooke is an equally comic foil. Despite an appetite for destruction and lust for others’ riches, his ineptness is a source of humor rather than fear. Hooke may mean to be frightening, but more often than not, he barely escapes with his life.

Fantastical stories often fall prey to an enervating earnestness, demanding that we follow along with the protagonists on their oh-so-serious, heroic quests. Colfer, however, balances his work with just enough cynicism. And the Louisiana-bayou vernacular peppered throughout brings levity to the narrative’s more terrifying situations.

It is Colfer’s realistic portrayal of his characters that brings Highfire to life. The young Squib is complicit in running any number of illegal substances through the swamp, and is one step removed from more sinister organized-crime figures. No pure hero, he.

However, as the teenage son of a struggling single mom, he engenders our sympathy. Even though he’s prone to illegal activity, and his nickname derives from an unfortunate incident with explosives, Squib makes us feel for him as he undergoes various trials at the hands of friend and foe alike.

And Vern the dragon could easily become just another epic monster, but his sympathetic plight as a lonely outcast, the last of his once-proud kind, causes us to warm (no pun intended) to him.

Constable Hooke, on the other hand, serves a polar opposite role. Colfer’s depiction of our antagonist is one of a thoroughly nefarious, preening force of evil. That we’re able to laugh at such a figure is proof of the author’s ability to deliver finely wrought characters.

If there’s a not-so-engaging portion of Highfire, it’s the latter third. In this section, Colfer’s prowess slips a bit. The unearned appreciation of certain players for others may leave you wondering as to their motivation. Likewise, the author introduces important but underdeveloped characters late in the book who may not move the reader.

Speaking of the reader, you might rightly ask for whom Highfire is written. Colfer, as stated, made his name as a children’s author. And, of course, the nature of the story — with its dragon and other mythical creatures — suggests a young target audience.

But certain aspects of the tale, including the hard-drinking exploits of Vern and graphic depictions of violence, argue against sharing it with rookie readers. The typical teen and sturdier adult, however, will be well-equipped for the novel.

Above all, to enjoy Highfire, you should have a love of fantasy and an open-minded approach to the genre. It’s a fun, rip-roaring read that draws you in and leaves you short of breath from both action and laughter. It’s hard not to be captivated.