Hell of a Book: A Novel 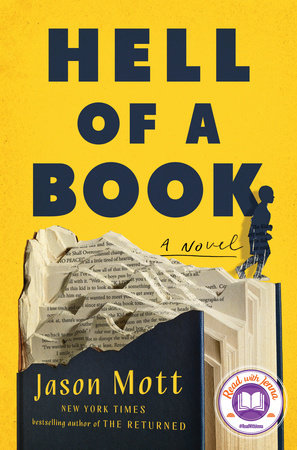 Just over a third of the way into Jason Mott’s Hell of a Book, the narrator describes the wood-burning heater in his childhood home as having “more tricks than a carful of monkeys.” One could say the same about Mott’s wonderful new novel itself.

Hell of a Book is many things: part send-up of the publishing industry, part road-trip comedy, part metafictional sleight of hand. But at its core, the novel is a harrowing and powerful meditation on racial injustice and its effects on the human psyche.

The author of two poetry collections and three previous novels, Mott structures his latest work around two alternating narratives: One follows the unnamed author-narrator of Hell of a Book on a raucous multi-state book tour; the other tells the story of Soot, a young boy coming to terms with the injustices of his world.

Accompanying the narrator on this sometimes-rollicking book tour is the Kid. At 10, the Kid is “gangly, meek…impossibly dark-skinned” and invisible to everyone but the narrator. The Kid can pop up anywhere: a hotel breakfast lounge, in the back of a limo, in an airport or bar. They might bicker a little, but when the Kid isn’t around, the narrator misses him and worries about him. They click because they’re both traumatized by loss, by fear, and by the burdens of being Black “in a world that works the way this one does.”

Grief and mourning haunt much of the novel. A Black kid has been killed by the police. On the TV are news stories about marches and protests. Everywhere on his book tour, the narrator is confronted by people — talk-show hosts, readers, his agent — asking him about it. As the famous author of Hell of a Book, he’s expected to say something wise. But he’s frazzled, his mind working furiously — often futilely — to keep out the sadness of another “cop-killed Black kid.”

The narrator’s method for dealing with the suffering of others is to retreat into a state of “persistent daydreaming.” A lauded writer, he is also an escapist, repelling fear, grief, intimacy, and loneliness with liquor, humor, noirish verbal gimmicks, and a powerful imagination. Of course, his methods for dealing with trauma aren’t very effective. And as the novel unfolds, pressures build and threaten to derail his book tour.

The other narrative that keeps this novel motoring is the story of Soot. Here, the setting changes to Soot’s hometown in rural South Carolina, and the point of view shifts to third person.

Like the Kid, Soot is 10, dark-skinned, and can also make himself invisible, albeit less reliably. For Soot’s father, William, America is terrifying. The dead Black kid on TV has the nation’s attention, and William can’t bear to explain to Soot that another racist cop has killed another innocent boy “that looked like him.”

In time, Soot’s family will also confront tragedy. Beautiful depictions of the family and the love that holds them together are juxtaposed with disturbing scenes of police violence and its aftermath.

Without resorting to sentimentality, Mott makes Soot’s innocence palpable. When Soot is cruelly bullied by another Black kid on the school bus because of his dark skin, readers see how colorism can poison relationships between Black folks. And while Soot has grown up in a home steeped with love, and his devoted parents have wrung themselves out worrying about him, his mother and father can no more protect Soot from sadistic peers than they can from sadistic cops.

There is a sinking feeling that the characters in Hell of a Book cannot escape brutality from police, from the media, from colorism, from gun violence — “the soundtrack of America” — and from “a country where you’re told that you’re a plague on the economy, that you’re nothing but a prisoner in the making, that your life can be taken away from you at any moment and there’s nothing you can do about it.”

The novel reflects the ugly realities of a nation where Black people are far more likely than white people to be stopped, searched, arrested, and killed by police. This is a book about what it’s like to live with those fears. Although the wisecracking narrator keeps up a chipper façade, he’s internalized these fears. Over and over, he’s racked by nightmarish hallucinations of innocent loved ones killed during encounters with the police. America, the novel shows us, traumatizes Black folks — even celebrated authors who grace the cover of Entertainment Weekly.

Here and there, Mott skewers dim white people who hide behind the myths about America. One white character, a media trainer, doesn’t realize that police violence against Black people didn’t start with the arrival of smartphone cameras. (Hilariously, he also thinks Kafka is a rapper.) When the narrator gives the Kid a version of the Talk, he takes aim at self-servingly naïve white folks:

For all its moments of levity, Mott has written a deadly serious story. By taking readers inside the psychic toll of racial trauma, Hell of a Book offers a disturbing portrait of a nation that’s been lying to itself all its years. In this way, the novel feels like a plea — intense, moving, urgent, and vital.

Adam Schwartz’s debut collection of stories, The Rest of the World, won the Washington Writers’ Publishing House 2020 prize for fiction. His stories have won prizes sponsored by Poets & Writers, Philadelphia Stories, and Baltimore City Paper and have appeared in numerous publications. His nonfiction has appeared in the Forward, New York Daily News, Sewanee Review, Baltimore Sun, and elsewhere.