Dual narratives drive this ambitious tale of race relations centered on both MLK’s assassination and the election of Barack Obama. 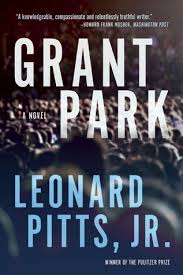 The hopeful notion of a “post-racial” America after the 2008 election of Barack Obama has run into a harsh and unforgiving reality. The election of our first African-American president, in hindsight, has only measured the gap between the real and the ideal in race relations.

In his third novel, Grant Park, nationally syndicated columnist Leonard Pitts Jr. continues his exploration of the seemingly impenetrable complexity of race relations. His story is set in the historical context of two events: the 1968 Memphis sanitation strike (with its civil unrest and the assassination of Reverend Martin Luther King) and the presidential election in 2008. Both are motivating forces that drive the main characters and his narrative.

In 1968, Malcolm Garvey Toussaint is a black college student during the strike in Memphis. Having renamed himself after black revolutionaries, Malcolm wrestles with the palpable tension between the influence of King’s espousal of nonviolence and the attractive but violent simplicity of certain “Black Power” positions that give vent to rage about systemic racial injustice. Importantly, Malcolm is haunted by his witnessing of King’s assassination on the Lorraine Motel balcony.

Also in 1968, Bob Carson, a student at a Christian college near Memphis, struggles with his concerns about racial injustice as he falls in love with Janeka Lattimore, a black voting-rights-activist classmate. Caught between the limitations of his own white experiences — always fearing he is a racist despite his best intentions — and the bewildering complexity of Janeka’s black experience, Bob is deeply affected by the Memphis riots, MLK’s death, and his fated relationship with Janeka. Unable to bridge their differences, Janeka breaks off their relationship, only to resurface 40 years later — and now an Obama campaign administrator — via an email invitation to Bob for lunch.

On the eve of the presidential election of 2008, Malcolm is a respected, Pulitzer Prize-winning columnist at the Chicago Post, where Bob Carson is his editor. He has written an emotionally charged column about the murder of an unarmed black man, Donte Stoddard, by Chicago police in a case of mistaken identity. Malcolm writes, “The only thing they had in common is that they were black. Apparently, that was enough.”

Malcolm quotes a particularly virulent email he received that asserted blacks accounted for the majority of crimes, drug dealing, and domestic violence, and accused Malcolm of “always playing the race card.” Malcolm writes, “Well, here we are 40 years later, friends and neighbors, and I am out of patience and I am out of faith.”

Because of its tone and vulgar expressions of rage, Carson rejects the column. Malcolm, then, late at night, hacks the paper and inserts his column. The paper is published; Malcolm is fired and then kidnapped on his way home by two aggrieved white supremacists.

The kidnappers, Clarence Pym and Dwayne McLarty, are the only members of the White Army of Resistance. Using Malcolm as part of a planned bombing assault on Grant Park, the location of President-Elect Obama’s acceptance speech, the two misanthropes try to publish their litany of grievances about African Americans (and Obama in particular) with references to Birtherism, socialism, threats to white manhood, affirmative action, and welfare. Their comical and chaotic quest, which ultimately involves Bob and Janeka, ends predictably.

In Grant Park, Pitts raises many familiar themes encoded in the election of an African-American president. As racist victims who have been “done wrong by the forces of history and change,” Dwayne and Clarence see their disenfranchisement from American life as a win-lose proposition in terms of race. Their marginalization is defined by unemployment, hopelessness, and a perceived loss of white manhood.

On the other hand, Malcolm’s story between MLK’s assassination and the election of Obama tells of increasing income inequality, economic and academic segregation, high black incarceration rates, and unemployment for African Americans.

Pitts is quite ambitious in his efforts, for he has written two narratives. The first is a thriller which, unfortunately, is undercut by melodrama and cartoonish characters like the bumbling Dwayne and Clarence. For instance, because he lost his father’s Ruger in a scuffle with a woman reporter, Dwayne steals his mother’s pink .22 pistol. As a symbol of male power, Pitts’ use of the small pistol creates a disconcerting juxtaposition to the profound seriousness of his thoughtful portrayal of racism.

Second, in that portrayal, Pitts wants the reader to know about the consequential narrative of racial history and its personal costs through the experiences of his protagonists and antagonists alike. The result is a story that takes on the feel of a lesson; this didactic approach does not serve the novel well.

In the end, Bob says to Malcolm, “We just elected a black president! You can’t tell me that doesn’t mean people are finally getting over all this stuff. It’s changing for the better. I mean don’t you think?” Malcolm is equally uncertain.

Maybe Pitts is, too, particularly in the face of recent events like the slaughter of nine Bible-study participants at the Emanuel African Methodist Church in Charleston, South Carolina. Hope persists; change, perhaps not so much.