A tight-knit group of friends must confront unsettling truths about themselves after one couple adopts a child. 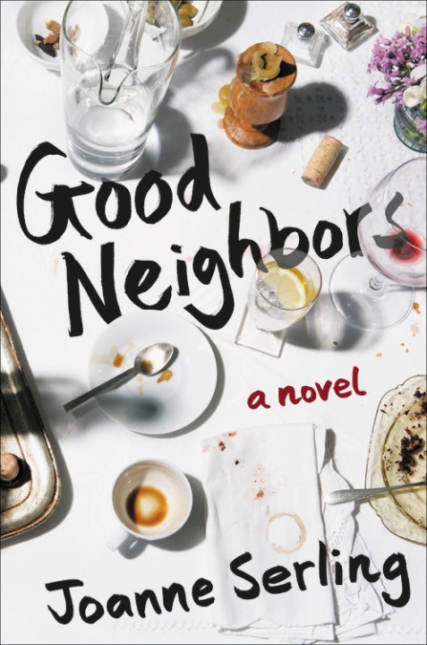 Joanne Serling’s Good Neighbors should come with a trigger warning for adopted people. The plot revolves around a girl who is adopted from Russia, but the child is depicted as almost less than human, a mere reflection of the fears, desires, and opinions of the adults around her. Their opinion of her teeters between suspicion and weepy-eyed admiration for “how a person could be saved with love and will and a little bit of money.”

Four families live “on the nicest street in the nicest neighborhood” of a far-flung suburb of Boston. They share the same goals — to look picture-perfect as they raise their children — and the same lifestyle of elaborate entertaining and competitive home decorating. They have worked hard to create a chummy camaraderie complete with annual parties and spontaneous get-togethers.

But that all changes when Paige and her husband, Gene, adopt Winnie, a 4-year-old Russian girl.

The narrator is stay-at-home mom Nicole Westerhof. She thinks in sentence fragments. With lots of exclamations! Constantly worrying about her standing in the community. Trying too hard to be liked! Careful not to cause offense! Unless she’s interacting with Nela, a high-powered lawyer and a Puerto Rican, the only person of color in the friend group.

Nela’s ethnic difference bothers Nicole. A lot. So does her refusal to comply with the ethos of the others, instead wearing “corporate attire to a Saturday-night holiday dinner” and covering her dining room table with “ugly brown vinyl table protectors.” Nicole feels that Nela dismisses the others as “the white folk who didn’t understand hardship.”

Still, she judges Nela much more harshly than she does the other two women in the group, Lorraine and Paige, claiming disingenuously, “We didn’t judge her, at least not openly.”

Meantime, Nicole bends over backward to give Paige the benefit of the doubt, even when she witnesses several extremely disturbing incidents. From the very first, Paige claims Winnie has an ever-growing list of adoption-related behavioral problems, complaining bitterly about her to friends, excluding her from events, and irrationally disciplining her for minor infractions. Nicole swallows Paige’s explanation that adopted children are different and don’t respond to love and discipline like other kids do.

True, she is a little bothered when Paige first tells her that Winnie doesn’t like to be hugged and then, a short time later, tells her, “She’ll hug anyone…It’s part of the orphanage thing.” But Paige is rich, thin, and white. She belongs to a country club! She has a giant-sized bonus room on her third floor! Nicole excuses her behavior again and again, accepting the couple’s descriptions of a never-ending litany of afflictions that adopted children suffer from.

Nicole assigns Winnie intentions and manipulations far beyond her years: “devilish”; “flirtatious”; “looked like she was posing”; “hint of artifice”; “her will to be admired”; and “she wasn’t as innocent as I’d hoped or once imagined.”

Yet Winnie is also special-needs, or something like that. It’s never really clear, for Nicole only has Paige and Gene’s word for it, and her own fretful observations as she spends a few hours alone with Winnie, including a visit to a Build-a-Bear shop where Winnie is slow to follow the clerk’s instructions, causing Nicole to perseverate, “Which meant what exactly? That she was slow? Or that this particular activity didn’t make sense to her? I wasn’t sure.”

What does become clear is that her friend is emotionally, if not physically, abusive to her daughter.

Nicole has her own challenges, illustrated by a side plot depicting her difficult relationships with an alcoholic sister and a whiny, obstreperous mother. She didn’t come from money, as some of the others in the group did, and feels both guilty about her prosperous life and awe for people who flaunt their wealth.

Finally, as Paige’s abuse of Winnie becomes too much to ignore, Nicole makes a call to the Department of Children and Family Services. Even though it’s not the first they have received, the caseworkers are indifferent and apparently as dazzled by wealth and class as Nicole, with one saying, “I doubt something bad could happen in a neighborhood like this.”

This means that the drama is allowed to continue until its not-quite-logical-but-definitely-tragic conclusion. As for Winnie, Serling gives her a slightly hopeful ending, one that adoptees and their advocates will view as the final insult to the egregious injury inflicted by the rest of the book.

Though Good Neighbors uses adoption as a catalyst to push the plot forward, this book is not really about adoption. If it were, the author wouldn’t traffic in tired clichés and then refuse to rebut them. Winnie is left a cipher, and the reader takes away the message that adoption is an ugly, messy business, a “risk of bad genetics,” a plot contrivance that teaches the rich, white woman a small life lesson.