Ghost Riders: When the US and German Soldiers Fought Together to Save the World’s Most Beautiful Horses in the Last Days of World War II 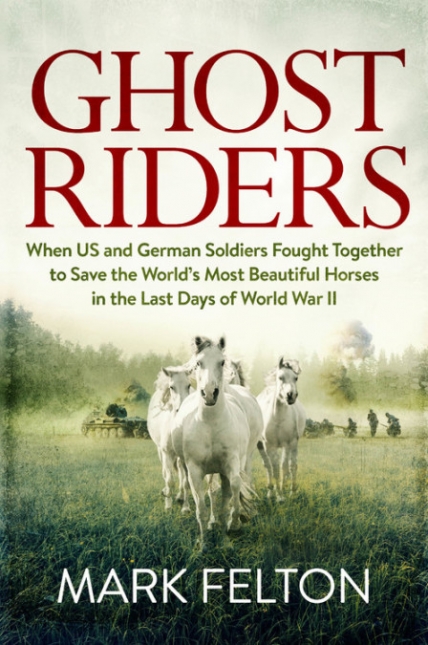 I was a child the first time I saw the Lipizzaner stallions on a grainy tape. My grandmother and I watched as each horse performed the highest-level dressage moves with ease. Now, as an adult stumbling my way through a correctly collected canter in my own sad attempt at the sport, I understand the skill and artistry of those horses and their riders.

There is a reason why the Spanish Riding School — where these horses still live and dance, as they have for more than 400 years — is considered a must-see for equine enthusiasts around the world.

Once I was a little older, we watched “The Miracle of the White Stallions,” my grandmother’s favorite movie. In this 1963 Disney film, Colonel Charles (Hank) Reed is persuaded by the head of the Spanish Riding School to save the horses from certain slaughter at the hands of hungry Soviet soldiers. The movie is brimming with soliloquies about art and American heroism, and there is even a bit of dressage peppered in for good measure. But the true story is even more dramatic and touching than the one on screen.

Mark Felton’s new Ghost Riders: When the US and German Soldiers Fought Together to Save the World’s Most Beautiful Horses in the Last Days of World War II tells the story of the Lipizzaners’ rescue with exacting clarity. It is a swashbuckling, bullets-flying retelling worthy of any lover of military history. Not only does it talk about the stallions in Vienna, but it also explains how the breed’s valuable broodmares were rescued from Czechoslovakia and how a ragtag bunch of horse-loving U.S., German, and Cossack soldiers saved them.

When I received Ghost Riders for review, I was curious to see how it compared to The Perfect Horse, equestrian author Elizabeth Letts’ telling of the same story. The difference is in their intended audiences: Letts’ book was written for horse lovers. It focuses on the Lipizzaners and also covers some of the other breeds caught in the crossfire of World War II, including the Polish Arabian.

One of the horsey topics Letts goes into detail about is how the Nazis used the beautiful white horses (famous for their impeccable breeding) as an example of what the “master race” could look like. The Nazi who took it over at the time started “line breeding” the animals, crossing mother with son, brother with sister, and so on, searching for that perfect horse. While this may be cool on “Game of Thrones,” the Austrian horse breeders were horrified.

Ghost Riders, on the other hand, is a military book with a hyper-focus on the rescue itself. As such, it is written for students of military history. The book spans less than a year, starting with the sound of sirens over the Spanish Riding School on September 10, 1944, and ending on May 22, 1945, in an airfield in upper Austria. This doesn’t make it less of a book, but it does make me — someone who has almost wrecked her car looking at pretty horses and falls asleep during cinematic battles scenes — not its ideal reader.

Nevertheless, this is a book of battles and glory, broken down with action sequences written with such precision that you can practically hear tanks roll past as you turn the page. Felton writes about how General Hank Reed and his men, with the blessing of General Patton, brave unstable territory at the end of the war.

He also describes how the sleepy village of Hostau, where the broodmares live, is transformed from pastoral paradise to battleground. With its uneasy location on the Russian side of the border, it is also a place that becomes an epicenter for equestrian outcasts whose loyalty to horses outranks almost everything else.

It is surprising that books like Ghost Riders are now coming to the fore, especially considering that the Spanish Riding School and those involved with the Lipizzaner breed have remained relatively quiet about the Nazi part of their past. But if someone is going to write about this slice of history, Mark Felton is more than qualified. He regularly offers commentary as a WWII expert on PBS, Discovery, and other outlets.

Felton’s writing reminds us just how dangerous the end of a war can be. The upheaval, destruction, and uncertainty after World War II led many desperate people to do many desperate things, and the fact that men as diverse as Cossacks, Nazis, and U.S. soldiers joined forces in such a sane, measured way is a triumph worth examining.