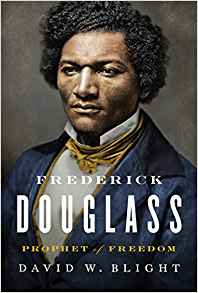 David W. Blight has given to the canon of biography a compelling, deeply researched, and engaging account of Frederick Douglass, arguably the greatest abolitionist in the struggle to end slavery in the United States.

This sweeping, accessible work offers a microcosm of American life during the 19th century, as Douglass — born sometime in 1818 (he never knew the month of his birth) and passing in 1895 — was at the forefront of most of the critical issues of the era, all of which revolved around slavery and race.

Like its subject matter, the book is grand and impressive. As a student of “memory,” Blight offers a different outlook on Douglass’ life from what is rendered in the man’s several autobiographies. He challenges Douglass’ recall, as well as some of his attitudes, and, in doing so, distinguishes himself as a biographer par excellence.

Blight’s portrayal of Douglass relies heavily on Douglass’ own words. Thus the book’s subtitle is important, for Douglass clearly saw himself as a contemporary Jeremiah and Isaiah preaching on behalf of the oppressed. He was a living and breathing jeremiad.

To resurrect the life of Douglass, Blight has mined heretofore unused resources. Hence, a robust, complicated human leaps from the pages. Blight also retrieves newspaper stories and opinions of Douglass from both sides of the Atlantic. This new information is a gamechanger in the interpretation of Douglass’ life. By the time of his death, he was a figure of international stature and the most-photographed American of the 19th century.

Douglass was born a slave on Maryland’s Eastern Shore and was taught to read by the somewhat sympathetic wife of his master. He then tutored himself in the Columbian Orator, a primer for public speaking, and steeped himself in the Bible (particularly the Old Testament), before making his escape North in 1838 to become an ardent abolitionist, author, and speaker. He also raised black troops to serve in the Union Army.

But Blight does not shy away from the inconsistencies in Douglass’ life, particularly his dysfunctional family and relationships with women such as Julia Crofts and the highly neurotic Ottilie Assing. While there is no evidence of any sexual liaisons with these white women, he engaged them as intellectual peers, a courtesy not extended to his wife, Anna.

Douglass was a master wordsmith. His writing often dripped with irony and sarcasm about the state of race relations, whether he was attacking slavery or the Ku Klux Klan-like mentality of the South in the years after Reconstruction.

Says Blight, “Douglass worshipped books, cherished contemplation and debate: he all but lived for his next well-crafted sentence.” He was uneducated in the formal sense but carried, along with the scars on his back, a wisdom of spirit that continues to transcend time and space.

Yet Douglass had nagging insecurities. As a self-made man, he realized that he was “liable to be full of contrarieties. He may be large, but at the same time awkward, swift, but ungraceful; a man of power, but deficient in the polish and amiable proportions of the affluent and regularly educated man.” Blight is succinct on this singular point: “An almost magical fact of Douglass’s life is how gracefully he hid such insecurity.”

As an abolitionist, Douglass eventually broke with his mentor, William Lloyd Garrison, the equally fiery anti-slavery champion and editor of the progressive newspaper the Liberator, to which Douglass had contributed.

Their falling-out was rooted in the fracture that was becoming a sectional divide: Garrison saw the U.S. Constitution as a pact with the Devil and was therefore willing to part ways with the South, while Douglass could not bear the burden of abandoning his 4 million brethren still in chains.

After the breakup, Douglass went on to edit his own anti-slavery newspaper, the North Star. By the time of the Civil War, he began to move in political circles, particularly among members of the Republican Party, to which he was a lifelong devotee.

He met with Abraham Lincoln several times to discuss war aims and slavery, and although he thought fondly of the president, when it came time to dedicate a monument in memory of the Emancipation Proclamation, he had no problem chiding Lincoln for being “cold, dull, and tardy” with respect to slavery.

As with many of his speeches or lectures, he used the term “we,” as opposed to “I,” to frame his remarks, claiming to be part of a larger whole.

Douglass’ most important public lectures are analyzed here, including a thoughtful examination of his famous July 5, 1852, speech, along with his “Mission Speech” and his “Self-Made Man Speech,” among others. Blight also delves into Douglass’ role as marshal of the District of Columbia and as ambassador to Haiti — both presidential appointments and not small pieces of recognition for an African American at the time.

Perhaps Blight is at his best as he works to untangle the shroud of the Douglass household. As a peripatetic lecturer, Douglass was on the road most of the year, even more so following the Civil War and Reconstruction. His family often felt adrift and cut off from him, and the presence of other women who admired Douglass, sometimes living under the same roof, proved problematic. His sons, Lewis and Charles, both veterans of the Union’s famed Massachusetts 54th Infantry, were constantly in need of financial relief, as were other members of his extended family.

When Anna died, Douglass secretly married Helen Pitts, a white social-justice advocate, which also immersed the family in an imbroglio. Yet the new Mrs. Douglass provided for him what Anna could not: intellectual comfort. Douglass also lost numerous grandchildren in the post-Civil War years. All of this weighed on him heavily, Blight assumes, though Douglass rarely addressed personal turmoil in any of his autobiographical works.

Given the tenor of our times, Frederick Douglass: Prophet of Freedom is a book to be admired and cherished. Blight does not hesitate to compare our current moment to that of Douglass, particularly the price that African Americans (especially in the South) paid after Reconstruction. In so many ways, this book is prescient. The voice of Frederick Douglass needs to be listened too, again, with increasing fervor.

James A. Percoco, author of Summers with Lincoln: Looking for the Man in the Monuments, is a nationally recognized history educator and a member of the National Teachers Hall of Fame. He teaches and is history chair at Loudon School for the Gifted: The School for Advanced Studies in Ashburn, Virginia.

A timely look at the roots of national unity as revolution percolates in the Middle East.