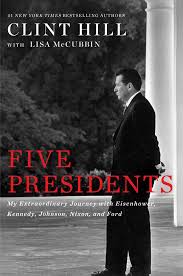 Although Secret Service agents are largely anonymous to the public, Clint Hill stands out because of his presence at the assassination of President John F. Kennedy on November 22, 1963. The photos of him reaching out to aid the wounded president and protect the first lady in their limousine are well known and powerful.

But Hill’s career was much more than that. His protective work from the late 1950s to the mid-1970s was diverse and exhibited single-minded professionalism through what was one of the more turbulent periods of the 20th century. Now he has chronicled those years in a new book, Five Presidents: My Extraordinary Journey with Eisenhower, Kennedy, Johnson, Nixon, and Ford.

This is the third book written by Hill with journalist Lisa McCubbin. Previous ones centered on the Kennedy years, first his Mrs. Kennedy and Me — he headed her Secret Service detail — and then Five Days in November, an account of the assassination and the president’s funeral. Readers of these two earlier books see a much broader dimension to Hill in this new book as he grows from a novice agent to a veteran supervisor.

Five Presidents reads like a Forrest Gump account of some of the most challenging moments of the nation in modern times. When Eisenhower toured the world as a goodwill ambassador at the height of American power and popularity, Clint Hill was there. But he also was a witness to the Cuban Missile Crisis; the assassination, of course; the agonizing events of the Vietnam War era; civil rights struggles; Watergate and the resignation of a president; and the ascension of an unelected president.

When he retired in 1975, the country had undergone vast change. The reader becomes privy to presidential history as seen through the eyes of a largely non-judgmental observer. Although at times the chapters appear to be chronological accounts of a diary or Hill’s personal notes, the book is very readable, often insightful, and frequently humorous.

The most compelling section deals with Lyndon Johnson. There have been many books highlighting his demanding personality and style — the “Johnson Treatment” — but Hill presents a narrative from the perspective of an agent whose service came to be valued by LBJ. His accounts of the president being impatient, impetuous, and oblivious to others’ needs are amusing.

Serious episodes, especially related to Johnson, appear too, but perhaps none so much as those involving the Vietnam War. Hill portrays a man anguished about the war, caught between his anti-communist views and the pain of sending young men into combat. It's already a well-reported story, but he includes poignant moments, such as Johnson’s visits to a local Catholic church, seeking guidance and solace.

Hill was in charge of the protective detail for Vice President Spiro Agnew, and he presents him as a personable man with little pretension — even if he winced at the disgraced vice president’s over-the-top political speeches. In one touching vignette, Agnew, while Hill was back in Washington, paid an unexpected visit to Hill’s elderly mother in Minot, North Dakota.

Although Hill, the dutiful public employee, avoids politics in his account, it is clear that he had little respect for Agnew’s boss, President Richard Nixon. Nixon is seen as suspicious of the Secret Service, frequently unwilling to heed their impartial advice, and heading an unscrupulous White House staff. Despite all this, Hill presents an entertaining account of the time Nixon met Elvis Presley at the White House in 1970.

Much of the information on guarding President and Mrs. Kennedy has been told at greater length in Hill’s previous two books. But what remains a strong theme throughout Five Presidents is the great toll that the Kennedy assassination had on Hill’s career and life. Essentially suffering from Post-Traumatic Stress Disorder, he suffuses the stories with flashbacks or incidents which remind him of that tragic day and how he might have prevented it.

While the book regales the readers with stories of five presidents and how they were protected, this is really a memoir of a man who did his job, a tough and demanding one, with great dedication. But it came at a price: his years in the Secret Service — the long hours, his absence on holidays and special occasions, and his lack of a normal routine — took a heavy toll on his family life.

That reality, which he clearly acknowledges, coupled with the trauma of the Kennedy assassination, made his government service bittersweet. And yet, for this small-town boy who traveled the globe, met world leaders, and worked for presidents, the experience was unbelievable. As he sums up at the end of the book, “It was the best damn job in the world.”

Joseph A. Esposito has had lifelong interest in government and history sparked when he met Senator John F. Kennedy in 1960. He served in three presidential administrations and currently teaches history to college undergraduates. He is working on a book, The Dinner of the Century: President and Mrs. Kennedy Host America’s Greatest Intellectuals, dealing with the dinner for Nobel laureates and others at the White House in 1962.

So Close to Home: A True Story of an American Family’s Fight for Survival During World War II

A lightly fictionalized, little-known tale of disaster at sea