Fen, Bog & Swamp: A Short History of Peatland Destruction and Its Role in the Climate Crisis

A passionate chronicle of a key ecosystem’s demise. 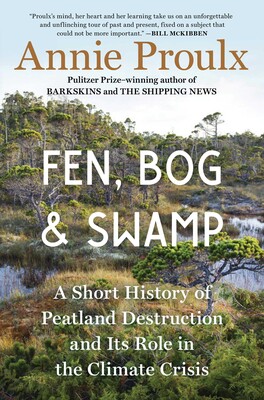 This is the book I wish Annie Proulx had done instead of Barkskins. Proulx has long been one of my favorite authors, but I did a stutter-step when I smacked up against her 700-page rant against rampaging New World capitalists’ rape of the natural world written as a history of the logging industry.

It’s not that she was wrong; it’s that fiction doesn’t lend itself to supporting a passionate lecture (especially not 700 pages’ worth), and I always felt that her righteous rage would have landed better as creative nonfiction.

And here it is: Fen, Bog & Swamp is a book-length personal essay in which Proulx takes us along on her documentary exploration of the world’s various forms of wetlands, their critical importance in maintaining natural balance within global ecosystems, and the many ways in which, as she quotes noted British ecologist Oliver Rackham, “the history of wetlands is the history of their destruction.”

Her objective in developing this work is driven by curiosity channeled through both anger and sadness:

“Before the last wetlands disappear I wanted to know more about this world we are losing…what meaning did these peatlands have, not only for humans but for all other life on earth?”

Though the history of civilization seems to lock itself arm in arm with the start of crop cultivation, it’s less clear at which point certain cultures became frozen into the rigid view that the only valuable use of land demands its subjugation and private ownership. To European settlers encroaching on new-to-them lands, the lack of cleared, dedicated cropland was proof that natives weren’t using the earth in any meaningful way. Yet those same natives, long experienced in utilizing the land to its natural advantage, watched in wonder as these interlopers initially came near to starvation, blind to the plenty in front of them.

When Francisco de Orellana and his crew, disobeying orders, became the first Europeans to navigate the Amazon, they were so hungry that “they were forced to eat their leather shoes…The Amazon historian John Hemmings remarks, ‘It was, and still is, extraordinary how Europeans never learned to live sustainably in the world’s most diverse ecosystem.’” One could argue that it’s the conqueror’s enduring, toxic combination of blindness and hubris to believe he knows better than those who spring from the soil on which they’ve lived for millennia.

Thus, in the eyes of enterprising capitalists casting about for riches, the only good wetland is a drained wetland. Indeed, land speculator and future father of our country George Washington “had enough chutzpah to try to drain the Great Dismal Swamp (with slave labor) for agricultural land.”

To be fair to the drainers, some of whom one imagines were civic-minded leaders working to ensure hungry people had food to eat, it was hard to see how those wetlands could’ve been tamed. Indeed, human life in the fens sounds pretty grim, rife with malaria (mal aria, Italian for “bad air”) and other diseases. In Proulx’s description, one can envision fens and bogs as the inspiration for Thomas Hobbes’ assessment of human life as “solitary, poor, nasty, brutish, and short.”

It is only from the Victorians onward that we’ve begun to recognize the crucial-but-hard-to-observe role wetlands play in supporting humanity’s long-term needs, most significantly as carbon sinks. Yet efforts to protect and preserve wetlands have been slow to emerge.

Proulx provides the definition of each of the peat-forming wetland types she surveys. Basically, a fen has the deepest waters, with inflow from upland rivers and streams, which carry minerals; a bog gets its water primarily from rain, which lacks minerals; and a swamp, also with mineral-laden inflow, is the driest of the three, supporting trees and shrubs.

Every instance of each type of wetland is unique, but all share similar characteristics, including a staggering biodiversity. The author recounts an effort in the 1980s of the British government to drain 470,000 acres of Scotland’s Flow Country bog in order to plant non-native trees for timber. “It all happened so quickly that one of the conservationists trying to record the diversity of the bogs had the planters right at his heels. ‘We were literally running along, right in front of the ploughs.’” No one in Proulx’s audience will be surprised to learn the trees didn’t fare well in ground nature-made to grow sphagnum moss.

The author’s accounts are wide-ranging and discursive, and they invite an attentive reader to pursue further investigation of many tantalizing topics, from the drowned Doggerland that once connected the British Isles to the European continent, to the unhappy history of English enclosure laws, to the ongoing efforts to restore drained marshes in southern Iraq.

Proulx wears her passion prominently on her sleeve, but — unlike in a work of fiction — it feels appropriate here. She is able to point to a few bright spots where protection and restoration efforts are underway (even as destruction continues elsewhere), and she dedicates the book to the people of Ecuador for enshrining in their constitution the legal rights of ecosystems.

I thought of Proulx and this book as I read Nicola Twilley’s “Letter from Rwanda: The Cold Rush” in the August 22, 2022, issue of the New Yorker. Twilley reports, “Wetlands take up a quarter of [Rwanda’s capital] Kigali’s surface area and they are now protected habitats — a distinct improvement on the glorified sewers that the rivers of London and Los Angeles became as those cities urbanized.” Perhaps we’re finally learning, though our awareness is slow, spotty, and quite possibly comes too late.

As Proulx describes ever-rising sea levels, she closes Fen, Bog & Swamp by harking back to the final line of Norman Maclean’s A River Runs Through It, musing, “In the end, all humans will be ‘haunted by waters.’”

The earth and its ecosystems exist on timescales beyond the comprehension of the humans who trod its soil; we are purpose-built for the short term. Unfortunately, the relentless acceleration of climate change is on a path to put paid to our bill, which has been accruing since the Anthropocene and is now coming due.