Enter Helen: The Invention of Helen Gurley Brown and the Rise of the Modern Single Woman

A riveting biography of the legendary Cosmopolitan editor 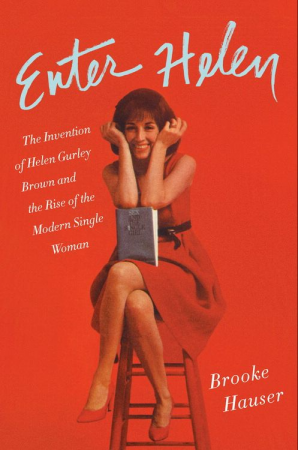 Do we celebrate Helen Gurley Brown as a groundbreaking magazine editor who opened the door to writing about sex and periods? Or do we loathe her for promulgating over-sexed images of women in Cosmopolitan magazine?

After reading Brooke Hauser’s complex biography of Brown, those answers remain as unclear as they did during Brown’s lifetime. That’s why Hauser’s book is such a great read. Enter Helen is neither hagiographic nor damning. It is a portrait of a woman who took over a failing magazine and made it one of the biggest successes in publishing history. It is also a portrait of the times that shaped her, and how she shaped them in turn. Or as Hauser’s subtitle says: “The invention of Helen Gurley Brown and the Rise of the Modern Single Woman.”

From writing Sex and the Single Girl to running early Cosmo articles on the pill and abortion, Helen Gurley Brown made a difference in the lives of countless young women in the 1960s and ‘70s. She also infuriated many of them. Hauser illustrates this contrast by showing the stunning success of Cosmo under Brown’s tutelage and by including examples of people like Nora Ephron who admitted to reading Cosmo under cover so others wouldn’t know.

There is also the delicate relationship between Gloria Steinem and Brown. Steinem freelanced for Cosmo in its early years under Brown and also never hesitated to lambast the magazine for the way it portrayed women. Yet Brown supported Ms. Magazine and brought Steinem to the Cosmo offices to explain “women’s lib” to her staff. Toward the end of Enter Helen, Hauser recounts how Steinem interviewed Brown for a cable TV show and kept pressing her to drop her carefully cultivated public image and reveal more of her true self. Brown didn’t bite.

Perhaps it’s not surprising then, that Brown, while publishing some well-reported articles, had no qualms about also publishing stories with fake people and even fake diets. After all, she was largely self-invented.

Like Steinem, Hauser also tries to get behind Brown’s persona. She is aided in this endeavor by Brown herself, who copiously chronicled her own life, writing everything down from the clothes she bought (and how much each item cost) to what she ate.

Hauser’s extensive research includes interviews with scores of people who knew Brown in all her various incarnations. Hauser also skirts the trap of getting stuck in her subject’s own curated mythology by looking at Brown through the lens of what was happening in the surrounding culture, especially the growth of the women’s liberation movement in the ‘60s and ‘70s.

As a summer intern for the Associated Press, I helped cover the August 26, 1970, women’s strike march that Hauser describes so well. I remember that first issue of Ms. Magazine that she recounts. What I don’t remember is anything about Cosmo except that it was considered a bit tawdry at the time. Decades later, as Washington editor for Glamour, I began to pay more attention to Cosmo because it was a competitor. Today, under Joanna Coles, Cosmo is covering politics and adding substantively to the conversation for younger women.

Enter Helen doesn’t start with childhood and move chronologically onward. At times, that can be confusing. The first part of the book shows Brown as a single working “gal” in Los Angeles and tells how she landed her “Mr. Right” — David Brown, a successful producer (of “The Sting” and many other movies).

He opened doors for her, gave her a comfortable lifestyle, and helped engineer her position at Cosmo (quite a feat given that she’d never worked for a magazine before and had no college degree, and that most women’s magazines were edited by men at the time). He was instrumental in her writing Sex and the Single Girl and remained her best editor and collaborator until his death at the age of 93, in 2010. (Helen followed two years later at the age of 90.)

From Los Angeles, Hauser follows the Browns to New York and eventually to Cosmo. Only close to the book’s halfway point does the author circle back and provide a fuller picture of Helen Gurley as a girl growing up in Arkansas who lost her father at age 10. It’s here that we begin to see more of the core self-confidence issues that dogged Brown her whole life.

As Hauser writes: “Helen worked on her issues, but she never worked them out. Her insecurity was cellular…” Hauser then circles back to the birth of Brown’s version of Cosmo and her years at its helm. Brown confronted, and at times embraced, “women’s lib,” while never retreating from the content formula feminists criticized as sexist and degrading to women.

Toward the end of Enter Helen, the author reminds us how Brown achieved success beyond what she could have imagined. Then Hauser asks, “So why did she feel the need to constantly prove herself?” Finding out is worth the journey, as Hauser quests to know an unknowable woman.

Linda Kramer Jenning is the former Washington editor of Glamour and teaches journalism at Georgetown. She is immediate past president of Journalism and Women Symposium.