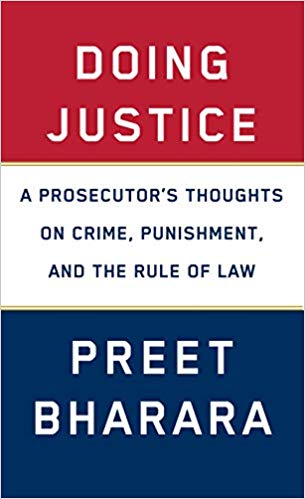 With Doing Justice: A Prosecutor’s Thoughts on Crime, Punishment, and the Rule of Law, Preet Bharara writes himself into the diamond circle of Clarence Darrow. There have been other good books by lawyers — including Louis Nizer’s My Life in Court and One Man’s Freedom by Edward Bennett Williams — that have enriched our understanding of the law and its application by practitioners of the bar. But Darrow set the gold standard in 1932 with The Story of My Life, which recounts one of the most extraordinary legal careers in American history.

In recent years, we’ve had to turn to the fiction of John Grisham (The Firm, The Client, The Pelican Brief, etc.) and the work of Aaron Sorkin (including his Broadway adaptations of “A Few Good Men” and To Kill a Mockingbird) to appreciate the vexing complexities that challenge doing justice.

But now we have an un-put-down-able primer from the former U.S. attorney for the Southern District of New York (SDNY), written with immense skill and engaging style. He’s tough, smart, and funny. He does not condescend to readers without legal credentials but clearly explains what “confirmation bias” is, what “proffers” are, and why most trial lawyers won’t risk irritating judges with “a motion for reconsideration.”

He tells riveting stories from real-life experience and attributes his near-perfect record as a federal prosecutor to the hard work and preparation that his team invested in achieving convictions in cases such as the Madoff/JPMorgan Chase Ponzi scheme and a scam defrauding a fund for Holocaust survivors.

Impressive is Bharara’s professional generosity. He dedicates his book to the “fearless women and men of the U.S. Attorney’s Office for the Southern District of New York” and, throughout its pages, he cites those who helped him achieve enormous success, naming numerous attorneys, as well as investigators and police detectives.

He wins admiration when he admits error. “We did not always get it right…we pursued cases that some people thought were overreach, and we walked away from others that some were dying to see us bring.”

In 2012, Bharara made the cover of TIME with the headline: “This Man is Busting Wall Street.” Yet some critics, like William D. Cohan in the Nation and Jesse Eisinger, author of the 2017 book The Chickenshit Club: Why the Justice Department Fails to Prosecute Executives, fault him for not indicting anyone after the 2008 financial crisis.

Bharara addresses the “odious conduct” by Wall Street thugs, writing: “No one likes the fact that bad actors got away with harming many innocent people,” but “we can only bring cases when the facts and the law lend support to an indictment.”

“Power in New York state is unduly concentrated in the hands of…just 3 men…who famously made all important decisions for the people of New York, mostly behind closed doors.”

He convicted two of the three and regrets not being able to wrestle the law into a choke-hold on the governor. “I have a lot I could say about the people we did not charge, after lengthy investigations. But I won’t. It is what it is.”

The SDNY is frequently referred to as the “Sovereign District” or the “Mother Church” because of its sterling record of criminal prosecutions. The New York Times calls it “one of New York City’s most powerful clubs,” because, as Bharara explains, its lawyers “are among the best-educated, most credentialed, highest achieving young lawyers in the country. Many clerk for the Supreme Court and are at the top of their class at the most prestigious schools.” Even he admits to having been intimidated by some of the résumés that crossed his desk.

But Bharara’s bona fides bow to none: Valedictorian of his high school, he graduated from Harvard and Columbia Law School, where he was a member of the Columbia Law Review. After several years in private practice doing white-collar defense work, Bharara served as chief counsel to Senator Chuck Schumer (D-NY) and was appointed by President Obama to be U.S. attorney for the SDNY, which, he writes, is “the best place I will ever work.” He held the position from 2009 to 2017 and racked up numerous convictions.

Following the 2016 presidential election, Donald Trump asked him to remain in his position, which gave him prosecutorial jurisdiction over many parts of Trump’s business empire. Seven weeks after the inauguration, Trump wanted him to resign. Bharara refused and was fired.

He later said on his podcast, “Stay Tuned with Preet,” that he believed the president would have asked him “to do something inappropriate” if he had stayed longer in the job. He joined New York University School of Law as distinguished scholar in residence, but he seems destined for broader horizons. Maybe Senator Preet? Possibly Governor Bharara?

Preet Bharara writes that you will not find God or grace in legal concepts or in formal notions of criminal justice. But be assured that you’ll find God and grace in this fascinating book.

Kitty Kelley is the author of seven number-one New York Times bestseller biographies. She is on the board of Reading Is Fundamental and the Independent.