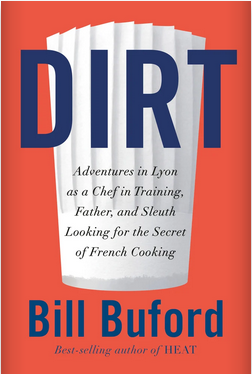 The subtitle of Bill Buford’s new Dirt: Adventures in Lyon as a Chef in Training, Father, and Sleuth Looking for the Secret of French Cooking attempts to prepare the reader for the book’s sweep, but this sprawling memoir exceeds even those generous borders.

The saga begins with the former New Yorker editor literally bumping into French-born chef Michel Richard, who rose to the heights of his profession in Washington, DC, with his award-winning, boundary-pushing French restaurant, Citronelle. Buford’s first impression isn’t swooning. “I suspected that the black show-no-stains shirt, if you got close to it, would have yielded up an impressively compressed bacterial history,” he writes.

After the voluminous and irrepressible Richard jokingly introduces himself as Paul Bocuse, one of the greatest Gallic chefs of the modern era, the two strike up a food-forward friendship. Buford stages — that is, works for low or no pay in exchange for training — in Richard’s kitchen, helping inspire the author to transplant his wife and their two young sons from New York City to Lyon, a cradle of classic French cooking and Bocuse’s home.

Buford’s Lyonnaise journey zigs and zags. There’s a short apprenticeship with a talented boulanger before he enrolls at the famed cooking school L’Institut Paul Bocuse, which he skips out on for a longer stage at the legendary La Mère Brazier. Sidebars abound. Buford seeks to meet Bocuse, guzzles the warm blood of a just-slaughtered pig, investigates whether French cooking is grounded in Italian traditions, and wrestles with the issues of living abroad with his family.

Sometimes, there’s a sense the author is not sure exactly what he’s looking for in all these adventures, but the deeply researched, sharply executed writing makes most of the detours feel rewarding rather than distracting.

Though Buford is clearly in awe of the country’s cuisine, he is never so starstruck that he can’t offer a delightfully unvarnished opinion. A notable zinger:

“An enduring French fallacy is café culture. French coffee is filthy, weak, incompetently made, and miserable-making to drink. The best coffee you get is the one you drink after crossing the border into Italy.”

Despite moments of levity, a heaviness hangs low throughout Dirt. Most readers will already know Bocuse and Richard are now cooking in the great big kitchen in the sky. (If not, sorry for the spoiler.) As the story ebbs and flows around the two late culinarians (along with plenty of guest appearances by Daniel Boulud), it sometimes reads more like an elegy than a memoir.

In the case of Richard, the eulogistic recognition is especially welcome. For though he remains beloved in his adopted hometown of DC, published several well-regarded cookbooks, and earned a ream of national culinary awards, Richard never became a household name like many of his peers. Having been personally bedazzled by his whimsically ingenious fare on many occasions, I think it’s a near-criminal shame. Dirt helps right that considerable wrong.

Buford tries to craft a tidy finale to draw together his explorations and (mis)adventures, but it doesn’t come together as planned. That’s okay. That’s how life goes.

His primary takeaway is simple:

“[A]n appreciation of the taste of food that hasn’t been ruined by industrial tricks, chemicals, manufactured aromas, pesticides, sugar, the conveyor belt of manipulated protein or starch or sweet goops that are hardened or toasted or coated and wrapped and distributed, the panoply of efficiencies that characterize the making of mass-marketed alimentary products just about everywhere, but nowhere more pervasively and menacingly than in the United States.”

Ultimately, Dirt stands as Buford’s most personal book yet — though lacking the single-minded sizzle of Heat and the searing carnality of Among the Thugs — and is as much an examination of himself as his subjects. Lucky for us, the life he is creating makes for a fascinating read.

Nevin Martell is a DC-based food and travel writer, parenting essayist, recipe developer, photographer, and author of eight books, including Red Truck Bakery Cookbook: Gold-Standard Recipes from America’s Favorite Rural Bakery. Follow him on Instagram at @nevinmartell and on Twitter at @nevinmartell.