A complex tale juxtaposing gang violence, the Holocaust, and the evolution of computers and the atom bomb. 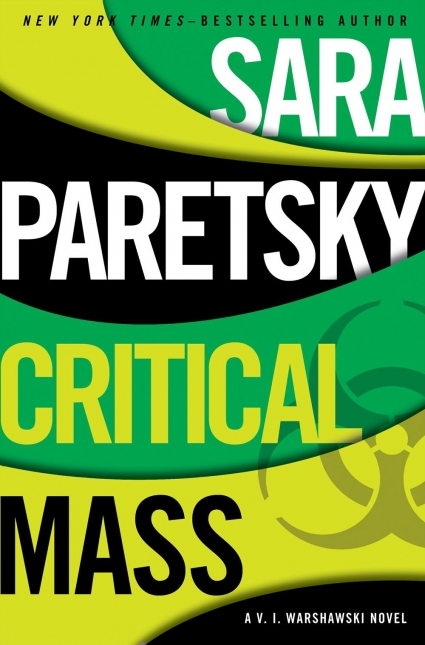 Sara Paretsky, named a Grand Master by the Mystery Writers of America and a recipient of the Cartier Diamond Dagger Award given by the British Crime Writers Association, is the author of 19 books. Among them is her V.I. Warshawski series, set in her hometown of Chicago, where her knowledge of the city and its neighborhoods is encyclopedic. She swings from the intellectual University of Chicago neighborhood on the south side, to the poor, crime-ridden far west side, to the affluent north side.

Critical Mass is Paretsky’s latest book in the V.I. Warshawski series. Once again her protagonist fights for the underdog, the poor and the lost. The story begins when her friend and doctor, Lotty Hershel, asks for her help in finding Martin, the genius grandson of a fellow World War II survivor, Kitty Saginor Binder. Searching for the boy, V.I. is immersed in the violent world of drugs and casual murder while looking for his estranged druggie mother, Judy Binder, and some family papers she may have stolen. The trail leads to a drug house in Chicago’s west side. But Judy escapes, and the private detective must find Martin another way — in the world of science and secrets.

During World War II, the United States, Japan, Germany and Great Britain raced to split the atom. Martin’s great-grandmother, Martina Saginor, was a brilliant Austrian physicist working under a future Nobel Prize winner on such a project. Martina wanted “to be inside the numbers, inside the function where it approaches the limit.” Her passion was for the stars, the atoms “inside the light.” But as a Jew she was sent to a concentration camp, and was gone.

Kitty, Martina’s illegitimate daughter who was first sent to Britain on the Kindertransport, has ended up in Chicago. That’s where the Nobel Prize winner and his family relocated after the war to work on the atom bomb for the United States. According to speculation, the Nobel Prize winner is Kitty’s father, and therefore Martin’s great-grandfather.

Martin works as a programmer, writing code for a company that has many secrets and ties to government security and was established after WWII to help develop the computer. During a visit to the company founder’s home, Martin sees something that is not right, something that leads him to find his mother. After someone seeking information — possibly the family documents — critically injures Judy and attacks and murders Kitty, readers soon realize that Martin is the key to the mystery. V.I. worries that Martin is at “that age, the cusp of adulthood, where idealism runs strong,” and he “might go in any direction — join a jihad or the Peace Corps, or drop out of sight in a monastery.” V.I. strives to find Martin before two groups of thugs, including rogue agents from Homeland Security, find him. She delves into family history, including Martina’s background, hoping that the past can explain the present.

Paretsky is the master of the simple and the complex. Critical Mass is a gritty tale that juxtaposes the underside of Chicago gang violence and drug lords, Holocaust genocide and murder, with the development of the atom bomb and ultimately the evolution of the computer. Paretsky’s interest in science is obvious, and at times deeper than the average reader’s, whose eyes may glaze over at some descriptions of scientific experiments or theories. But the expertise is there, both in scientific detail and in plotting a fascinating, intricately woven story spanning several generations. This is a tale of morality, honor and justice in the family, the workplace, the government and the world.

Susan Guthrie Knight is a former teacher and big-box store management survivor who sometimes writes but more often reads. She lives surrounded by orchards just north of Gettysburg with her French bulldog, Fannie.