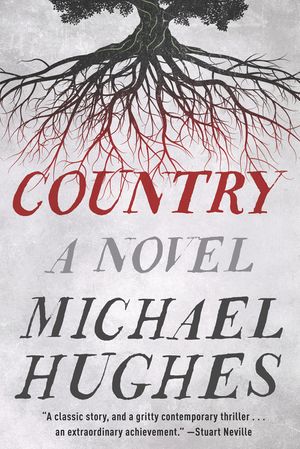 In Country, author Michael Hughes immerses readers in Ireland’s Troubles. The novel also runs parallel to The Iliad, relaying themes of romantic love, friendship, and the bond between warriors. It is 1996, Northern Ireland, and after 25 years of conflict, there is still unrest, even amid a ceasefire in anticipation of peace talks with the English.

But within the Provisional Irish Republican Army (PIRA), a new conflict arises not caused by politics but by an argument over a woman. When Shane “Pig” Campbell — the Officer Commanding (OC) — loses his girlfriend, he demands a replacement: the partner of their sniper, Liam “Achill” O’Brien.

Because Pig is the OC, Achill follows orders and sends “his woman” to Pig, but at a price. Pig’s crew loses its most effective asset — Achill quits outright; he’s the best in PIRA and feared by the English. The sniper refuses to continue fighting because his leader has offended his hard-won honor.

This feud over a woman causes an anger so grievous, it sets off a chain of events that forever changes the lives of the PIRA soldiers and the English officer sworn to defeat them.

Then there is Nellie — the wife of Pig’s brother — a young woman who owes a favor to powerful men and becomes a spy for the British SAS. She knows who’s who and what’s what in the organization; after all, she married one of them.

Captain Henry Morrow of the British SAS, recently promoted to a desk job, is bored with the ceasefire and “itching for action” in the field. Henry is a born soldier, and soldiers need a fight. “He was the line of civilization, standing at the edge of what Britain was supposed to be about, holding back the chaos, talking on the enemy.”

But how much of the fight is for justice for Northern Ireland, and how much is personal?

As Achill stubbornly refuses to continue the PIRA’s war against the British, men from his squad try to convince him that the good of Ireland is far more important than any offense perpetrated by their equally stubborn OC:

“And when Justice is done, you have to leave the wrong behind. Nobody wants to live in fury their whole life.”

Written in sometimes-difficult-to-understand regional vernacular, the novel nonetheless thrusts readers into the Irish countryside and the conflict that ravaged it. We can almost imagine eating potato soup with the men of a PIRA squad around a worn wooden table as they strategize about their next moves.

As in The Iliad, this story teaches that leaders must respect their men, and men, ultimately, must forgive each other for the sake of the common good.