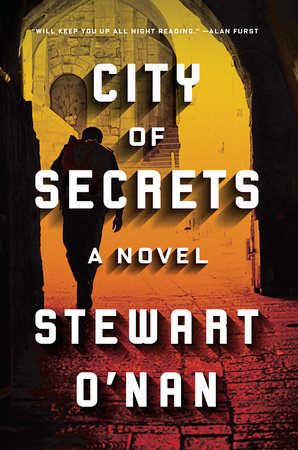 Stewart O'Nan is one of those authors widely praised by critics but somewhat unknown by general readers. A shame, really, because his books are so good. He works on an intimate scale, writing both with economy and gritty realism. His characters are nuanced — decent, though hardly heroic.

As a writer, O'Nan can be hard to slot. His novels inhabit so many sub-genres: ghost story, historical fiction, naturalism, family drama, mystery, and now, a spy story.

In City of Secrets, the protagonist, Brand, a thirty-something Latvian, survives the Nazi death camps only to be rounded up again by the Russians. Eventually released, he makes his way to Palestine, still a British Mandate.

In Palestine, where we pick up with him, Brand has a new identity and a car, as well as a job as a taxi driver — all provided by the Haganah underground. When he's not shuffling tourists to the hot spots of Jerusalem, Brand transports operatives and weapons.

But this is no Uris-styled Exodus, and Brand is not a freedom fighter. He's ambivalent, anxious, and, most of all, self-loathing. Of his entire family, including his young wife, Brand alone survived the war — a source of shame that haunts him still, as do memories of his former life. If only he could forget.

One of the members of Brand's Haganah cell is Eva, a prostitute 10 years his senior, with whom he falls in love. The two, both deeply scarred by the war (Eva, literally), offer one another consolation and a chance to elude memory, if only briefly.

O'Nan keeps the narrative pace slow but taut. As the British clamp down on growing unrest in the Mandate, they exhibit a viciousness that can only remind the Jews of their former Nazi captors. In response, the underground amps up its bombings, and Brand attempts to dispel the unease he feels toward the violence. He hopes his efforts will redeem him, making him a better man, one his family would be proud of.

But as with all good spy novels, things are never what they seem. O'Nan has carefully set up the "puzzle box" atmosphere of Jerusalem, where secrets and betrayals are rife. Brand maneuvers his car through the maze of cobbled alleys, lanes, and bazaars, alongside shadowy courtyards, arcades, and arches, never fully grasping his role in all that will happen...until it happens. By then, it's too late.

City of Secrets is a rich, powerful, beautifully crafted novel. It explores the pervasiveness of violence, as well as its ambiguity — the way it can mask itself as necessity, entice the well-intentioned to cruelty, and blur the lines between good and evil. Finally, there is this: Once you've read Stewart O'Nan, you'll want to read more.

Molly Lundquist owns and operates LitLovers, a website providing resources to book clubs and solo readers. Prior to founding LitLovers, she worked for 15 years as a public-relations speech writer. She later earned an M.A. in English and worked for several years as a college English instructor.