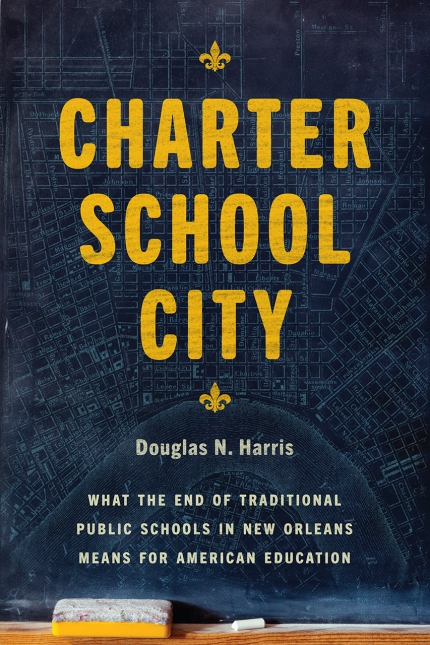 In August of 2005, just as the school year was getting started in New Orleans, Hurricane Katrina virtually destroyed the city’s school system. The flooding that devastated New Orleans — sending the vast majority of its people into exile and rendering whole neighborhoods uninhabitable — closed the schools for a year and scattered its students, faculty, and staff to a dozen other states, as well as homeless shelters in Louisiana.

However, while it was set in motion by a natural disaster, the dismantling and rebuilding of the Orleans Parish School District was a political act, one that had been long debated. As Douglas N. Harris puts it in Charter School City, his new study of school reform in New Orleans, the system was in dire need of reform: The Orleans Parish School District’s high school graduation rate ranked 63rd out of Louisiana’s 68 school districts. Since, as a state, Louisiana had the second-lowest graduation rate in the country, New Orleans was “near the very bottom of the list of over fourteen thousand US school districts.”

The Louisiana state government seized the crisis as an opportunity to rebuild the school system along completely different lines, and “within the span of just a few months,” Harris writes, “the state took over almost all of the city’s schools, the teachers were fired, the teacher union’s contract was eliminated, and schools were opened up to parental choice.”

Starting in 2006, New Orleans would rely almost entirely on charter schools, and assigning schools based on neighborhood would be replaced by parental choice — what have been called “market-based” reforms. As anyone who has followed American education at all in the last 30 years knows, this was the kind of radical transformation some reformers had long advocated. But no school district in the country had undertaken reform on such a large scale.

Harris is an educational economist and director of Tulane University’s Education Research Alliance for New Orleans, a research center he founded specifically to analyze and evaluate these reforms. Charter School City is the outcome of, in his words, “one of the largest studies of a single school district ever conducted.” It offers an insider’s history and evaluation of the specific reforms New Orleans has attempted.

Harris begins with the replacement of the old Orleans Parish School District with the newly formed Recovery School District (RSD). While outlining the role of prominent national organizations like Teach for America and the KIPP charter school network, as well as the political players in New Orleans like the Landrieu family and Leslie Jacobs, “a powerful, aggressive local insurance executive” long interested in reforming New Orleans schools, the author offers significant criticisms of this process.

For example, he points out that “the immediate effect [of relying on Teach for America] was to place students in classrooms with teachers who lacked training, did not plan to stay, and did not have roots in the local communities.” He characterizes the reform methods as anti-democratic:

He also notes that there were racial implications to these decisions: “Three out of four teachers fired were black, compared with fewer than half of those subsequently hired.” However, Harris argues that these criticisms do not diminish the value of the reforms, concluding, “The process was ugly, but the result was unprecedented.”

Indeed, the figures Harris cites are impressive. Test scores for elementary and middle schools raise the district’s ranking among Louisiana schools from the bottom to about the middle; high school graduation rates and ACT scores show significant gains; and the percentage of New Orleans high school graduates going on to college rises from 37 to 63 percent. These results outstrip anything any other district has achieved with charter schools, school choice, and similar reforms.

Harris spends the second half of the book discussing what might account for this success. He avoids directly taking sides but concludes that “market” reforms — choice and competition — do not explain the improvement, at least not completely. He outlines the preconditions necessary for a classic market and argues that education does not fit the definition. For example, for consumer choice to be effective, individuals must have many good options and must have reliable information about those options.

While parents and children play the role of the consumer in the education market, in the real world, they rarely have multiple good options, and good information about schools is frustratingly difficult to find. Rather than improving schools, Harris argues that an over-reliance on competition explains the disappointing results of the first several years of the reforms. He states that real success came with a second wave of reforms.

The initial enthusiasm for autonomous charter schools and competition led the RSD to allow schools to make virtually all its own decisions. This was supposed to lead to innovation around curriculum and teaching, as families flocked to the most successful schools. However, Harris argues that — since the power to choose lies more with schools than with families — schools innovated around recruiting and retaining successful students, while avoiding or discharging those less successful.

In response, in the early 2010s, the state and the RSD centralized the administration of enrollment, discipline, transportation, and school funding. Schools were prevented, to a larger degree, from cherry-picking their students.

Meanwhile, in 2007, the RSD began the practice of closing charter schools and re-contracting them to new operators. This policy was so aggressive that, by 2016, 40 schools were closed and re-contracted (in a city that only had 83 schools). In other cities, the disruption of school closures and takeovers often negated any improvement from the new school, but Harris cites statistics to indicate students at all levels performed better in these takeover schools.

He credits policies that closed schools strictly based on failure to meet data-based performance objectives and that only allowed operators with a proven record of success to re-open them. He concludes it was this combination of “market” policies — largely autonomous charter schools — and government intervention — centralization of core administrative functions — that created the conditions for rapid school improvement.

When Harris turns to the question of lessons to be learned from New Orleans, he does not argue for any particular package of reforms but introduces the more general concept he labels “Democratic Choice.” This involves evaluating school systems based on values that must drive public education: “freedom, efficiency, equity, and community.”

There is a role for market-driven practices, but Harris rejects the notion that government action is unnecessary, finally arguing that we must move beyond “unproductive and superficial debates” about “privatization” and “government monopolies” and recognize the contributions of both schools of thought.

There are issues that Harris may take too lightly — for example, closing 40 schools in an 83-school system had to significantly disrupt the education of hundreds of children. He also focuses primarily on statistics for the whole of New Orleans, even though such city-wide statistics hide the reform effects on the lowest-performing schools, often in the poorest neighborhoods.

However, the statistics he cites are persuasive, and Harris is not a blind advocate for any one school of reform. Anyone interested in diving more deeply into the current school debates without the noise from overheated political rhetoric will find Charter School City an excellent starting point.

John P. Loonam has a Ph.D. in American literature from the City University of New York and taught English in New York City public schools for over 35 years. He has published fiction in various anthologies and journals, and his short plays have been featured by the Mottola Theater Project. He is married and the father of two sons; the four have lived in Brooklyn since long before it was cool.