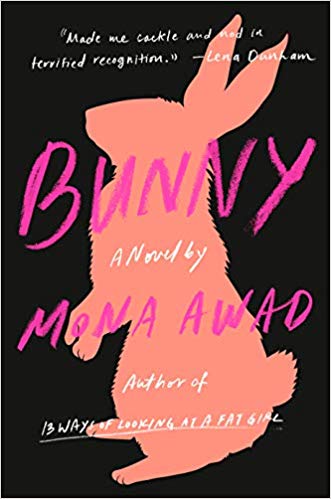 Writing programs and writers retreats have had this novel coming. Mona Awad (author of 13 Ways of Looking at a Fat Girl) gives the rarified world of the MFA program more than its due in her new book, Bunny. It’s a kind of horror story crossed with satire which takes on the cliquishness, elitism, and self-indulgence that characterize so many writing workshops.

Awad also has something to say about the psychological energy, time, and money such programs exact from participants. She has a wicked sense of humor, and you get the sense she had a lot of fun writing this book. But her sense of the macabre takes a peculiar turn.

Samantha Heather Mackey is a kind of goth outsider who attends the Warren University MFA program in New England on a grant because “the school opens doors, so many doors, surely it does, doesn’t it.”

Only problem is, she is not a “Bunny.” She doesn’t belong to the clique of girls who dress in Peter Pan collars, eat miniature cupcakes, wear perfume that smells like cupcakes, and call each other Bunny. “Hi, Bunny! Hi, Bunny! What did you do last night, Bunny? I hung out with you, Bunny. Remember, Bunny? That’s right, Bunny, you hung out with me and it was the best time I ever had,” we read on page one.

Instead of hanging with the Bunnies, Samantha sits on a park bench watching a swan and filling her notebook with writing that is “sort of in love with its own outsiderness.” Samantha’s perspective is reinforced by best friend Ava, an artist who is equally revolted by the Bunny club:

“She dropped out before they killed her soul. Fuck that. Fuck them. Now she works in the basement of the nature lab down the hill shelving dead bugs. Every single dead bug gets its own tiny glass drawer.”

Then everything goes pear-shaped. Samantha gets a personalized invitation to the Bunnies’ private Smut Salon and can’t resist attending. “It’s like Touching Tuesdays or binge watching The Bachelorette.”

After attending their private writers group, Samantha loses her way. Her thesis advisor, “the Lion,” stops mentoring her, she suffers from writers block, and, before we know it, she’s been sucked into the Bunnies’ sickly sweet horror (and I do mean horror) show. It’s not that she likes them or their writing. It’s their company she can’t resist.

“The Body is all the rage,” she tells us scathingly of their work, “as though everyone in the academic world has just now discovered that they are vesseled in precarious, fastly decaying houses of bone and flesh and my god, what material. What a wealth of themes and plot.”

What kind of work does this produce? Says Samantha, “It’s a piece of pretentious shit. That it says nothing, gives nothing. That I don’t understand it, that probably no one does and no one ever will. That not being understood is a privilege I can’t afford.”

Banalities abound in the Bunny writing world — as do #amwriting messages. But even producing work this bad exacts a terrible toll: You must kill your angels. I won’t spoil the book by telling you the form the horror takes. But as their favorite workshop leader remarks toward the end, all sorts of transformations are possible during the final thesis semester. Participants:

“retreat to our own individual dark spaces — to spin the pain and fear and shame that lives there into so much literary gold. Genitals get impaled with pins. Hair gets chopped off with hacksaws, sometimes ripped from the root. Genders become fluid, orientations shift, white people suddenly discover other races in their lineage…And then of course, some take it too far. One poor man chopped off an ear. That was…unfortunate, but also indicative. Of the deeper Transformation required by the Work. The Work does not come without Cost.”

Given this hilarious paragraph, it’s a shame Awad doesn’t really run with it or play more with these ideas to greater comic and horrific effect. Instead, she takes the story off on a tack which doesn’t entirely deliver. Bunny has its share of sinister ritual, but you won’t find the kinds of set pieces, nail-biting moments, ramped-up stakes, or manipulations of time and tension you expect from the best kinds of horror stories.

Nevertheless, anyone who has attended an MFA program or writers retreat will recognize many elements Awad satirizes. Bunny is a clever commentary on female friendship and artistic competitiveness. The energy in her writing is truly infectious, and it’s a lot of fun to go with her down the rabbit hole.

Amanda Holmes Duffy is a bookseller at Politics and Prose and has a weekly podcast, “Read Me A Poem,” at the American Scholar magazine.