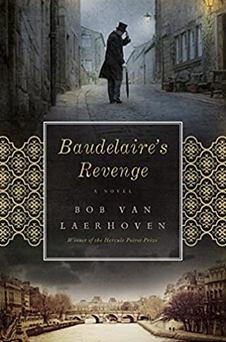 The year is 1870. France is at war with Prussia. They are fighting over many things but ultimately over who will be the big dog in Europe. And the Prussians are winning. Emperor Napoleon III has surrendered his army at Sedan. Bismarck’s forces surround Paris with a ring of steel that tightens by the day. Rich Parisians insulate themselves with liquor, drugs, and debauchery. The poor suffer. The rebels plot rebellion. And real dogs, big and small, appear on café menus all across the starving city.

In Baudelaire’s Revenge by Bob Van Laerhoven, the Prussian encirclement is merely the outer ring of hell. Many other circles spin within it. And at the center is the poet Charles Baudelaire, author of the notorious Les Fleurs du Mal (The Flowers of Evil). Though he has been dead for three years when the novel begins, his odes to the seductive embrace of sex and death, poems that created such sensation and scandal, echo on every page — because someone is murdering those who persecuted Baudelaire during his life and leaving each corpse with a few lines of his verse.

Enter the detective, Commissioner Lefevre, a middle-aged war veteran who has looked death in the eye more than once. Considering his fascination with a certain Parisian cocotte, he has intimate knowledge of sexual extremes, too. As his investigation begins, he has no idea that by the end, he will fully understand the meaning of Baudelaire’s poetry. “When the sickness that has taken hold of you jumbles dream and reality into a maze with no exit, that’s when you realize you’re suffering from the curse of Baudelaire.”

Belgian author Bob Van Laerhoven won his country’s Hercule Poirot Prize for best detective novel with Baudelaire’s Revenge. And he has brought together all the elements of a classic policier — the atmosphere of dread, the underworld filled with dangerous and duplicitous suspects, a detective as flawed as the criminals, and corpses, lots of corpses. But this is not a conventional detective novel. While the story moves quickly, it is less about detection and deduction than about characters revealing their dreams and despair. Van Laerhoven is after something more than the simple solution to the crime, and his ambition carries the reader along.

Commissioner Lefevre and his assistant, Bouveroux, begin like all good detectives. They ask questions: Who is the murderer? What is his fascination with Baudelaire? Why the poetry? Their trail leads from Parisian prostitutes to Baudelaire’s own mother to a dwarfish little Belgian named Poupeye. Soon they are lost in that maze, lost in a labyrinth of clues and motives.

Then, they find their way to a woman named Simone Bourbier. Or perhaps she finds them. Is she the murderer? Is she Baudelaire’s twin sister? Is she even a she? Questions within questions, circles within circles, narratives within narratives. When they discover her diary, Bourbier begins to tell her story, and while the diary entries reveal her tortured psyche, they force a new and choppy rhythm onto the book.

Two pages of Bourbier’s diary follow two of Lefevre exploring the Parisian darkness, then three from the diary, then two of Bouveroux wondering… The scenes become like flashes of light from a broken mirror of a plot. The story continues to move quickly. It must, with its series of short almost shard-like chapters. But it also loses some of its first-act momentum.

The rhythm changes again in the third act, when the mysteries are unraveled through a series of long monologues in which characters explain away the whys and wherefores of everything that has gone before. In one scene, a prostitute reveals that a miraculous escape a hundred pages earlier came about because of a convenient grand mal seizure that Van Laerhoven never foreshadowed. In another, a character talks for eight pages to fill in 180 pages of plot while he bricks up a victim in a cellar. The scene may carry echoes of Edgar Allan Poe (whom Baudelaire admired and translated), but all the talk just defuses the horror.

Most of the big revelations in Baudelaire’s Revenge, then, come not through action but through the recounting of action. This creates a storytelling style that is fundamentally less dramatic than a straightforward narrative. But Baudelaire’s Revenge works because Van Laerhoven has created so many characters whose inner lives are as darkly fascinating as Baudelaire’s own poetry. They live as if to fulfill the words of Baudelaire’s mother about her son, that he “spent his entire life in a state of anger at being born.”

There are no happy endings here. No innocents are saved. The Prussians do not turn away. And it is not a perfect book. But it is a journey worth taking to the heart of a strange, death-obsessed place where a dead poet still dwells in his writing. When it’s over, you may agree with Lefevre that every new day brings “another opportunity for disgust and horror, nothing new, you get used to it after a while.”

William Martin is the New York Times bestselling author of 10 novels. His latest is The Lincoln Letter.