A media expert claims a better line of querying can heal social rifts in divisive times. 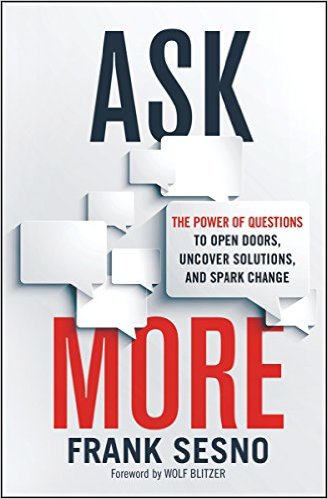 "Smart questions make smarter people," writes Frank Sesno in the opening line of Ask More: The Power of Questions to Open Doors, Uncover Solutions and Spark Change. Sesno should know. A former CNN journalist and now director of the School of Media and Public Affairs at the George Washington University, Sesno's built a career on questioning the famous and infamous.

Ask More encourages us to defy our fears and tackle those problems that beset us with measured, careful inquiry. At heart, his book's central premise is simple: Intelligent, insightful questions, posed in the spirit of genuine inquiry, lead to intelligent, insightful answers. When it comes to our everyday interactions, he is correct. As Francis Bacon wrote, “such knowledge, itself is power.”

Sesno's overly anecdote-padded book emerged from his own curiosity about whether he and others could be more effective at eliciting information through intentional inquiry, a late-in-life epiphany he had not as a journalist, but due to his position at GW.

"What if we went asking for solutions and posed truly creative questions that could change the world?" Sesno posits. It would be a reasonable question in more reasonable times.

"Technology has revealed endless horizons, but it has also created a quick-hit search-engine culture where a fast answer can obscure deeper inquiry. The polarization of politics, amplified by social media, has fractured civil discourse and infused it with invective instead of dialogue.”

But we live in a post-factual age of unreason. Our siloed opinions are drawn from a narrow band of sources we painstakingly cultivate to deliver only the values with which we agree. We want to be right, even if the cost is truth. In an increasingly black-and-white world, complexity is terrifying, nuance an irritating inconvenience, and never should we have to face the discomforting possibility of discordant opinion. Volume, not knowledge, is power.

It's in the arena of self-help that this book may prove of most use to the average reader — emphasis on “self.” As he interviewed skilled questioners for Ask More, Sesno writes, he "became convinced that a 'taxonomy' of questions, each with its own approach and compelling benefits, could serve as a useful way to think about what and how we ask."

It's that taxonomy — the types of questions we can ask and the approaches to situations in which each technique is most useful — which Sesno lays out over 13 chapters, breaking the interview process down into diagnostic, strategic, empathetic, bridging, and confrontational questioning, to name just a few.

A sampling of questions is offered at the end of the book. Because of that, one of the book's strengths is that readers can determine their own areas of weakness in the questioning process, and can dip into the text to choose which strategy they need for an improved rhetorical skill set.

Where Sesno fails to convince this reader is in his grander claim: the comprehensively transformative effect that would result if we would only inquire in the manner he presents. It's a lofty claim that simply asking better questions will heal the nation when the genie has fled so far from the bottle.

We can all ask better questions, but other than offering a subjective tool to analyze and improve our interpersonal interactions, I doubt Ask More can deliver the universal salve Sesno uses to market his particular brand of panacea. Meaningful discussion relies on both parties accepting — if not agreeing with — a few basic truths.

No one can be compelled to answer truthfully, especially now, when the overwhelming narrative is that personal belief, however much in error, trumps fact, and when the reaction to even modest questioning is to be shouted down with visceral, ad hominem attacks. Facts are of little concern when the lies have become so shameless and frequent.

In the context of the past year, Sesno's claim that "truly creative questions" might offer a way back to a more rational time comes across as a wee bit naive.

Cliff Cumber is a former journalist who now works in communications. He has a long commute and listens to an awful lot of books. Follow him on Twitter at @cgcumber.