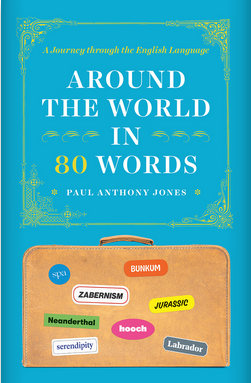 Paul Anthony Jones builds Around the World in 80 Words on a clever premise. What might happen, he asks (and answers), if “instead of looking at the origins of the place names in our atlases and gazetteers, we look at the origins of the words in the dictionary that are themselves derived from place names? By doing that, we suddenly have a whole new set of stories to tell.”

That premise leads to a journey of “70,000 miles, eighty destinations, sixty-five countries, and six continents,” and to the etymological stories behind 80 principal words.

“Our guide on this journey has been the dictionary, not the atlas,” Jones later confirms (and he appends a select bibliography of 15 specialized dictionaries from the 18th through 21st centuries). The conceit is muddled: Since Jones as author has used the dictionary to organize the journey, he serves as the reader’s tour guide.

He proves, in any case, a most capable and agreeable guide: erudite and affable, always informative and often funny, he steers us with a clear, breezy, colloquial style through 80 destinations and the 80 principal words that he traces to their names. Like his fictional predecessor Phineas Fogg, and aptly for a work on the English language, he begins and ends the journey in London.

The words in question might connect obviously to place names: “port wine” from Porto, Portugal, or “spa” from Spa, Belgium. Or, more opaquely: “bedlam” from Bethlehem, Palestine, or “buggery” from Sofia, Bulgaria. Word and place often connect via a person: Balaclava, Ukraine, yields “raglan” sleeves, for example, because Lord Raglan, commander of British forces at the disastrous Battle of Balaclava, wore a coat designed with such sleeves to disguise a missing arm lost at the Battle of Waterloo.

They may also connect via persons: Samut Songkhram, Thailand, etymologically begets “Siamese twins” because the village in then Siam literally begat the celebrated conjoined twins, Chang and Eng Bunker, who toured America and Europe in the middle 50 years of the 19th century.

Words and places chosen, alternatively, might be linked through accidents of history — Panama hats originated in Ecuador, but the Spanish entrepreneur who first saw their commercial value exported them to Europe via Panama — or of language: Bikini Atoll, testing site for the atomic bomb, gave the French-designed bikini its name via a figurative bomb: another skimpy swimsuit, designed in France at the same time, called the “atome.”

Words and places might also be linked through politics — German bellicosity resulted in the German boarhound switching nationality, at least nominally, and becoming the Great Dane — or through science: A rock sample from Ytterby, Sweden, yielded four of the elements in the periodic table, as well as the names of two of them, yttrium and ytterbium.

These examples also reflect Jones’ overall strategy: He identifies a principal word or phrase with each location, organizing the entry around it, while he also teases out etymologies and histories of many other words associated with the place.

So, to cite just one example, he tracks a primary word, “doolally” — “a temporary state of madness or period of crazed, peculiar behaviour” — to a rash of suicides and cases of insanity in a 19th-century British military camp in Deolali, India. He also pauses to unpack calico, dungarees, jodhpurs, dum-dum bullets, bungalow, tamarind, and, in a footnote, Blighty, a nickname for Britain that “derives from an Urdu word, vilayati,” or foreign.

Well researched and well guided, Jones’ tour instructs and delights. The many stops, or entries, however, also lead to familiarity and fatigue. Somewhat formulaic and self-contained, the entries typically begin with a quickly stale trope of moving from one place to another, and typically end with a closing quip, many nicely epigrammatic, others more leaden.

Excepting four outliers, moreover, all entries are a uniform two to four pages, producing the pace of a march rather than a stroll (and resulting, incidentally, in considerable cumulative blank space). And while the entries offer the charm of serendipity, they also suffer from a certain randomness: Why these places and words rather than others?

The world of books, happily, boasts extraordinary diversity: at one end of the spectrum are literary monuments, say Paradise Lost or Ulysses, that demand enormous effort and attention and offer commensurate rewards in beauty, intelligence, and depth — books that take weeks upon weeks to read, and that repay a lifetime of reading. At the other end are literary curiosities, divertissements, that demand little time and effort and that offer pleasant entertainment — books meant to be read in bits, and likely only once.

Around the World in 80 Words approaches the latter end. Modest in demands and rewards, it perfectly suits Metro rides or short flights. That is no criticism; this book does its job well.