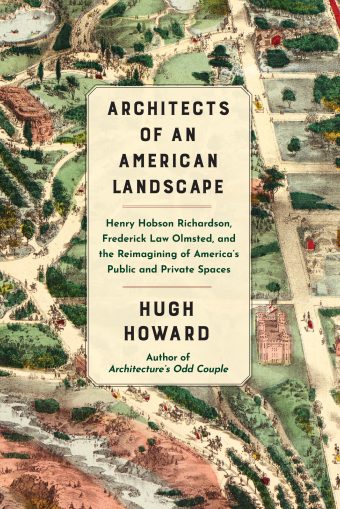 Hugh Howard gets it marvelously right in Architects of an American Landscape, his joint biography of two Gilded Age luminaries. Both men are strikingly important in our nation’s cultural history, and the author nails his pairing of the two with solid scholarship and graceful, vivid writing.

Just as importantly, he gives us a volume richly illustrated with more than 50 half-tone images. Overall, the presentation is superb.

Howard’s subjects were both architects: one a planner of buildings, the other a designer of landscapes. Henry Hobson Richardson is credited with the refinement of what’s become known as the “Richardsonian Romanesque” style and is ranked by some as one of the three great American architects, along with Louis Sullivan and Frank Lloyd Wright.

Trained at the Ecole des Beaux Arts in Paris, Richardson specialized in monumental public edifices — institutional buildings, churches, and libraries — as well as in equally monumental private residences for the ruling classes.

Frederick Law Olmsted, on the other hand, made his mark conceiving outdoor spaces intended for universal use and enjoyment. Olmsted sought to channel, in his own words, the “profuse careless utterance of Nature.” He viewed his parks as “the lungs of the metropolis,” places where the populations of America’s increasingly congested cities could commune with the natural world on an everyday basis.

We all know Olmsted as the genius behind New York’s Central Park. You might not realize he was also a prime mover (both officially and as an “influencer”) who secured the designation of much of the Yosemite Valley as a protected enclave. He also spearheaded the stunning transformation of Chicago’s Jackson Park into the setting for the 1893 Columbian Exposition and guided the development of the U.S. Capitol’s West Front and its surrounding landscaping.

Though their respective creative platforms — built versus natural environments — might seem at odds to the casual reader, in Richardson’s and Olmsted’s hands, the two métiers proved remarkably complementary. The men collaborated frequently, as in the property described here, an exquisite example of the so-called “shingle style,” the residential-design approach Richardson is often credited with introducing:

“The entire exterior of the finished house would be covered with plain shingles, its roof surface broken only by rising chimney stacks of rough stone. With virtually no decorative detail or trim — even the porch posts were clad in shingles — the Bryant place would not call attention to itself. Olmsted’s terraces and Richardson’s porches fit into the folds of granite outcropping undergirding the house. The walks and paths Olmsted laid out on the waterfront acres tethered the Bryant home to its place. The house, its view, and its setting were one.”

Still, there were differences in the pair’s background and personality. Richardson was born to a prominent New Orleans family whose long prosperity was rooted in slaveholding. He was the model of the “connected” Gilded Age mover and shaker, drawing on the cachet of his European training and his vaunted reputation for architectural commissions. Writes Howard, “Richardson seemed to like — and, in return, to be liked by — everyone he met.”

His friend and colleague Olmsted was starkly different. A vehement opponent of slavery — “[His] voice had been essential in the anti-slavery movement” — Olmsted was a gruff, scrambling, can-do sort, prone to direct speech, even surliness. “[He] was intense, solemn, self-contained, imperious, and quick to anger,” explains the author, “even those who loved him acknowledged that he, a perfectionist, could at times be testy, temperamental, and tactless.”

Richardson’s career was cut tragically short, though it was not entirely unexpected among those close to him. He died at 46, likely due to Bright’s disease and an intemperate lifestyle; he weighed well over 300 pounds at the time of his death:

“Signs of Richardson’s growing disability were everywhere. He required a pair of large rings, hung by straps from the ceiling, to maneuver his immense bulk in and out of bed…[and] his unusually large bathtub was equipped with steps, inside and out, to ease his access.”

Richardson’s death in 1886 affected his devoted colleague greatly. Afterward, Olmsted enshrined a framed photograph of his friend and frequent collaborator on his office wall. In an age of grand, monumental memorials, this private gesture spoke volumes.

Bob Duffy is a retired ad executive and brand consultant based in Columbia, Maryland.

American Fire: Love, Arson, and Life in a Vanishing Land

This exploration of the haunted, burning heart of rural America leaves much unsaid about its soul.