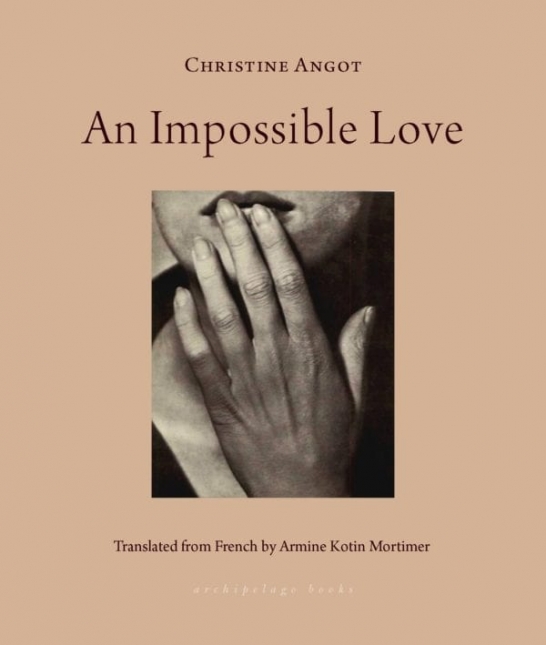 Christine Angot has been controversial in her native France ever since the release of her 1999 autofiction novel, Incest. That was a story about obsessiveness, trauma, and rage in which a break-up with Angot’s lesbian lover triggers memories of her sexual relationship with her father. Tess Lewis’ brilliant English translation was published by Archipelago four years ago.

Now, An Impossible Love, published in French in 2015, adapted to film in 2018, and newly translated into English by Armine Kotin Mortimer, takes up the story from another angle and tells it in a more restrained and declarative voice.

This time, Angot begins with her parents’ relationship in the early 1950s in Chateauroux, when Pierre Angot meets Rachel Schwartz. Pierre has the upper hand by force of character, education, and a staggering sense of entitlement. Rachel is beautiful but also poor, less sophisticated, and Jewish. Pierre makes it clear from the start that he will never marry her, while Rachel “had at last found someone who made sense to her.”

As his career advances and he moves further afield, we come to know Pierre primarily through his letters. He suggests to Rachel that she move into an apartment closer to where he lives so that they can continue seeing each other. When she becomes pregnant, he barely mentions it, simply reiterating that he won’t marry her. “If you had been rich, I would surely have thought about it…yes, it’s true. I am being frank with you. I’ve always been frank.”

But having had her grand passion, Rachel regrets nothing. When Christine is born, and Pierre takes no interest, it’s up to Rachel to build the myth:

“She talked to me about him. All children had fathers. Mine was an intellectual. He knew several languages. They had loved each other. It had been a grand love affair. They had wanted me. I was not an accident. She had been proud carrying me for nine months. In spite of the taunts and the words spoken behind her back. Now here I was. She was glad. Where my father was, what he was doing was nobody’s business. If people asked me, he was dead or traveling.”

Then Rachel receives a blow to her self-esteem and cuts off contact with Pierre for several years. He weds a German who is pregnant with his child, explaining, “I wasn’t thinking of marrying her, you know my way of thinking. But her father was very convincing.” Besides, he says, these are cultivated people.

As years go by, mother and daughter become everything to each other. They are completely devoted until Christine turns 14 and contact with Pierre resumes. Christine is instantly enamored of her father. His etiquette is impeccable. He takes them to restaurants. Holidays are arranged where they can spend time together near his home in Strasbourg. He makes an important and meaningful gesture by filling out paperwork so that Christine can be legally recognized as his daughter, even while his German wife and legitimate children remain in the dark.

Then, while his family is away, Pierre begins taking Christine out for weekends alone, leaving Rachel behind. With the onset of these weekend visits, mother and daughter become distant from each other. Soon:

“My father no longer came into the building. When he brought me back, he dropped me in the parking lot. I took the elevator, I arrived on the sixth floor, and rang the bell. She opened the door. I did not smile. I no longer leapt into her arms. I gave her two quick kisses on her cheeks in the entryway. I looked annoyed as if I regretted returning to my life with her.”

In these simple words, “as if,” we detect what isn’t said. Finally, a friend of Rachel’s, in whom we are led to understand Christine has confided, explains that Christine must never again spend the night at her father’s house. Rachel learns the truth and falls to pieces:

“During the night that followed she had a violent attack of fever. Her temperature rose to 105.8 degrees. She had an infection of the fallopian tubes. She was hospitalized, she stayed in the hospital for ten days. She was dumbfounded. At the same time…she was not surprised.”

As the narrator of An Impossible Love, Christine has positioned herself as a minor character in her own story. The effect is devastating. She sees the first, most important, and impossible love as that between Rachel and Pierre. Only later does the impossible love become the incestuous relationship between herself and her father. And finally, also the damaged relationship between herself and Rachel.

An Impossible Love is an exploration of how shame, denial, and betrayal can converge in lethal ways. Pierre’s early behavior, if not forgiven, is certainly overlooked by Rachel, and this paves the way for what happens to Christine. Rachel’s story then becomes a coming to terms with shame and her lack of self-worth. Finally, it is the story of a mother-daughter bond almost irreversibly damaged.

But truth must dazzle gradually. In grappling with what cannot be said or trying to face it head-on, the truth becomes blinding. At one stage in the aftermath, Rachel has a breakdown and sobs — not for Christine, mind you, but for her own dead mother. “Because I stayed attached to your father. I believed in him for too long. I was unhappy. And I annoyed her with that.”

Christine Angot is one of the bravest women writing in France today, and Armine Kotin Mortimer’s English translation of this novel is lucid and powerful. Incest was among the most difficult books I’ve ever read. Shockingly raw, erratic, poetic, and chaotic, it put you in the center of the author’s self-loathing. But the restraint and emotional range displayed in An Impossible Love makes this book a more painful story. What isn’t said hollows you out inside. The incest taboo remains a taboo even as it is central to the novel, so that you find yourself staring into a moral abyss and at an emotional and sexual life left in irreparable ruin.

A city is brought to vivid life through a fractal depiction of its inhabitants.