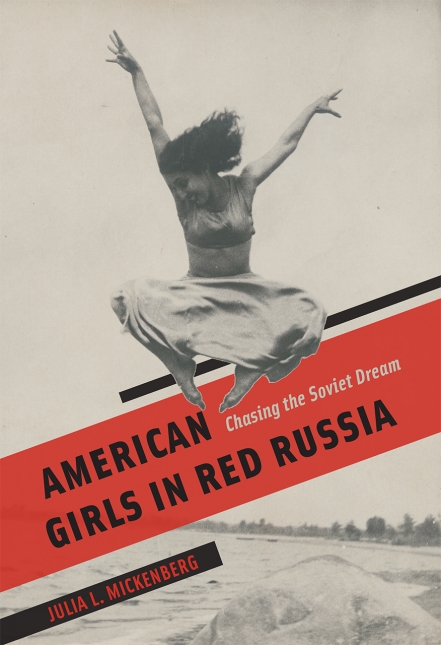 Stories of women who left the United States for the Soviet Union in the 1920s and 1930s offer long-forgotten case studies in personal motivation and the meaning of success in Julia Mickenberg’s new book, American Girls in Red Russia: Chasing the Soviet Dream.

These women, from a variety of backgrounds — including a fascinating group of African-American intellectuals who were originally slated to act in a Soviet film on American race relations — were excited by the prospect of life free from the social constraints of their homeland. The Soviet Union was full of both tremendous practical need (primarily in the form of the millions of homeless and starving children displaced by war) and of progressive ideals and creative promise.

Mickenberg explains how the USSR had begun by officially abolishing sexual and racial discrimination, and offered women opportunities outside traditional familial roles, along with ready access to abortion, divorce, and collective childcare. American women who came to the country helped found schools, children’s colonies, and newspapers; worked as journalists, lecturers, and artists; and observed Soviet women of multiple ethnicities in many other responsible positions in industry and government.

The Americans also enjoyed passionate (if often temporary) liaisons with locals and fellow expatriates. Mickenberg quotes extensively from diaries, correspondence, and books written by these women, who spoke of their excitement and frustrations in this new land of opportunity. Milly Bennett, for example, a journalist newly arrived in Moscow, described sharing a room with Ann Louise Strong, managing editor of the English-language Moscow News:

“For three weeks, for 24 hours a day, I worked, ate, and slept in the same room with a woman who cried and moaned all night in her sleep,…who banged typewriters or screamed over the phone all day…She resigned twice a day…she beat up on the maid…and toward the end…she ran screaming into the kitchen one morning and threw dishes crashing into the sink.”

Strong was, in Bennett’s words, trying to “win friends for Soviet Russia” via a “subtle, witty, sophisticated story of Russian life,” but the local censors had turned her efforts into “a horrible, bland chunk of typical…propaganda.”

As Mickenberg’s research shows, in one instance after another, planned performances, creative colonies, and industrial communes that were begun with enthusiasm eventually ended unrealized, leaving the Americans disillusioned and disappointed.

Notably, besides conflicts with the burgeoning Soviet bureaucracy and increasingly repressive political forces, there were occasions when these women were sexually and ethnically marginalized by other American women: Journalist Margaret Bourke-White dismissed fellow broadcaster Williana Burroughs as an anonymous “South Carolina colored mammy,” and Ruth Epperson Kennell clashed in Siberia with an expat engineer’s wife who expected her to “perform those household tasks which tradition had imposed upon my sex.”

With the exception of brief remarks by a couple of young adherents of Isadora Duncan — who expressed initial excitement at the dancer’s revolutionary style, but later voiced disappointment upon seeing the middle-aged performer in the 1920s — Mickenberg does not include details of how Russian women viewed the Americans, or of the substance of their interactions.

Although Mickenberg reaffirms the profound and predominately positive impressions that their Russian experiences left on the Americans — in the pre-Civil Rights era, the equitable treatment that non-whites were accorded by their Soviet hosts contrasted drastically with the miseries they endured at home — she doesn’t go into detail as to the post-Soviet lives of her protagonists, with the exception of Anna Louise Strong.

Isadora Duncan, of course, was famously (and accidentally) garrotted by her own tangled scarf just three years after her departure, but other women lived for decades in the West, and the practical domestic repercussions of their Russian experiences upon their American lives could have offered a useful context.

The latter chapters of the book briefly note effects of the Stalinist Purge of the 1930s on the remaining foreigners in the Soviet Union — particularly the circumscription of their lives as comrades were arrested and disappeared, and others became informers — and describes Bourke-White’s, Lillian Hellman’s, and others’ depictions of Russian women during WWII.

Scholarly practice always affects its outcome: Mickenberg’s progressive perspective did allow her access to some Russian-held research materials that have been off-limits to researchers of other ideological viewpoints. She reports in the final chapter, “Red Spy Queens?” that “conservative” scholar John Earl Haynes had told her that, in Moscow, she wouldn’t be given access to any personal files, but she was actually permitted to view “just about every” one she requested.

She speculates whether an archivist surmised that she would interpret the files differently from Hayes; my own 2009 research in St. Petersburg, attests to this, as at one repository I was bluntly asked, “What are you going to say about it?” before permission was given to see any material. This is a peculiar way to conduct research, but American women in Russia have to accept unfamiliar circumstances as we try to tell our stories and those of other women.

Christina Petrides, co-translator of Maria Shelyakhovskaya’s Utverzhdenie v liubvi. Istoria odnoi russkoi sem’i: 1872-1981 (Being Grounded in Love: A History of One Russian Family, 1872-1981), and formerly a doctoral candidate in Russian history at Georgetown University, is currently chasing the South Korean dream as an English teacher on Jeju Island.