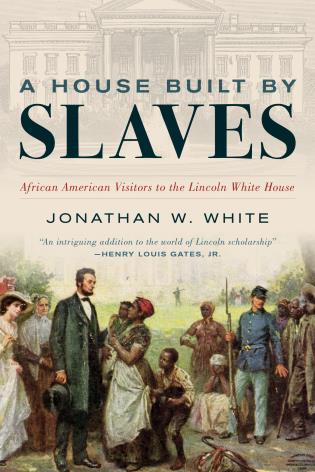 I was a third of the way through Jonathan W. White’s brilliant A House Built by Slaves when I had a revelatory moment. My long-held impression — forged by years in Pennsylvania public-school classrooms — that Abraham Lincoln was one of the greatest presidents, if not the greatest, his goodness as solid as the granite of Mount Rushmore, may not have been entirely accurate. Or, at least, it was incomplete.

With his new book, White, a history professor at Christopher Newport University and a Lincoln scholar, has given me a fuller, more nuanced view of the Great Emancipator and his legacy. And shouldn’t that be the goal of all good historical writing?

There were, of course, many critics of Lincoln during his lifetime; half the country chose to secede from the nation he ruled. His white critics saw in Lincoln a threat to their lifestyles and livelihoods through the abolition of slavery. Lincoln’s Black critics, including Frederick Douglass, saw in the commander-in-chief a flawed man not doing enough, quickly enough, to secure the freedom of African Americans.

Fast-forward to today, and Lincoln is still drawing criticism, as monuments to his legacy have become flashpoints during the Black Lives Matter movement. As White points out in his introduction, modern artists such as Tupac Shakur were openly critical of Lincoln and, more recently, Nas rapped in “Not For Radio” that:

“Abe Lincoln did not free the enslaved. Progress was made ‘cause we forced the proclamation. (Fuck your proclamation!)”

White must have been tempted to push back on these strong words by offering some of Lincoln’s own, but he doesn’t take the bait — or dismiss the valid criticism that our 16th president could’ve done more to help Black people during his lifetime. Rest assured, Lincoln’s eloquence is on full display in A House Built by Slaves, but it’s presented subtly, doled out in small offerings often matched by the eloquence of his Black guests (notably Douglass and Sojourner Truth).

White couches his narrative in the important stories of these Black visitors, capturing both the novelty of their presence and the incendiary effect it had on Lincoln’s many enemies (not to mention the barely disguised shock displayed by members of the press in reporting on the normalcy with which Lincoln received Black guests).

To some white visitors at the White House, in fact, the presence of Black people was more talked about than Lincoln’s presence. The president’s willingness to openly entertain them and afford them the same consideration as whites was further proof to critics that Lincoln was ruining the very fabric of our nation. Conversely, to many Black Americans, including the Reverend Isaac K. Felton of North Carolina, Lincoln was beyond reproach:

“We knock! and the door is opened unto to us. We seek the President! and find him to the joy and comfort of our hearts. WE ask, and receive his sympathies and promises to do for us all he could. He didn’t tell us to go round to the back door, but, like a true gentleman and noble-hearted chief, with as much courtesy and respect as though we had been the Japanese Embassy he invited us into the White House.”

Obviously, not all shared Felton’s devotion to the president, and White grants these dissenting voices space and consideration but pushes back as the research allows. He also portrays Lincoln as a man whose views on slavery and the rights of Black people evolved as he himself matured. But his personal feelings notwithstanding, Lincoln was a politician. He understood that centering his presidential candidacy — and, later, his administration — on the abolition of slavery would be political suicide.

Ultimately, Lincoln believed first and foremost in our country’s founding principle that all men are created equal, and it was this belief that propelled him to issue the Emancipation Proclamation, albeit far too late in the eyes of many.

By chronicling the visits of Black guests to the White House — and Lincoln’s warm reception of them in an era that all but forbade it — Jonathan White has produced in A House Built by Slaves a valuable addition to the Lincoln canon. It’s one that captures not an infallible man, perhaps, but one who grappled to overcome his flaws and rise to the level of greatness later assigned to him.