A Dangerous Business: A Novel

Winning elements fail to coalesce in this disappointing frontier whodunit. 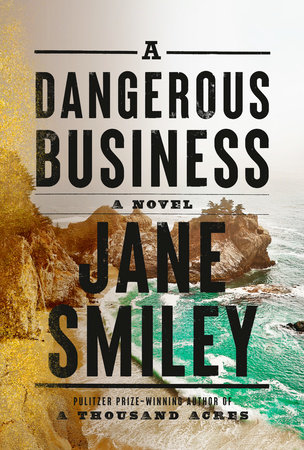 A Dangerous Business, Jane Smiley’s new bit of historical fiction, pushes forward in a straightforward narrative rhythm that’s as pared down and reductive as the standard commonplaces of her heroine’s religious upbringing. As the story opens, we meet Eliza Ripple, a widow in mid-19th-century California. Eliza is also a prostitute, serving her clients with plainspoken efficiency, only vaguely aware of any disconnect with the stringent Calvinist-derived values of her youth.

This ironic, arguably conventional setup might seem to presage a plot reversal, or at least a quiver of emotional heartburn. Neither emerges early on.

Here’s the heroine’s backstory. Reared in Kalamazoo, Michigan, 18-year-old Eliza McCracken gets married — at her parents’ insistence — to a virtual stranger she just can’t warm to. New husband Peter Cargill, dreaming of Gold Rush riches, carries her off by wagon train to coastal Monterey. For Eliza, the match is unsatisfying: Peter, often drunk, regularly mistreats or, at best, ignores her. And so Eliza is unmoved when her husband, blundering into or fomenting a bar fight — she never discovers which, and barely cares — is soon shot dead.

Facing penury, she takes on the “Ripple” surname and drifts into comfortable harlotry, watched over by a kindly madam of a certain age who is hyper-protective and always free with a supplemental handout to keep her charge happy. Smiley describes the run of Eliza’s intimate activities in this homey brothel with casual directness and a touch of comedy:

“The fellow was tired, but he produced his prick even before he had his pants off — he was so eager that he stumbled across the floor, and Eliza had to reach out to steady him. They fell unto the bed, and he was done with his business in a few seconds.”

Significantly, Eliza’s place of “business” (a weighted term doing double and triple duty in the novel) draws no opprobrium in a town where men vastly outnumber women.

The matrons of Monterey not only regard the brothel with apparent acceptance, but they support a bordello of their own. Here, in an establishment mischievously named “The Pearly Gates,” women serve the needs of other women, which often — though not always — run only to sisterly conversational comforts and affectionate cuddling.

We wonder, with smug anticipation, if Smiley, feminist values to the fore, is crafting a utopian parable here, a new cloud cuckoo land or Animal Farm. Or maybe we just can’t shake our conditioned expectation of a coming plot reversal, a suspicion as difficult to wave away as a persistent mosquito.

As we wait for the allegory to beef up, or for a twist to materialize, the core storyline kicks in. Eliza befriends Jean MacPherson, a cross-dressing courtesan from the Pearly Gates:

As their friendship deepens, the pair determines to solve a serial murder case that the threadbare local constabulary is ignoring. The killer (or killers) is preying on prostitutes in the area. Sophisticated Jean schools Eliza in the niceties of detection, with reference to contemporary best-seller Edgar Allan Poe and his pioneering crime-solver, C. Auguste Dupin. In her head, naïve Eliza, something of a frontier Nancy Drew, renders his name “DuPANN.”

Long story short, the two bring the case to a suitable resolution. Regrettably, for the reader, the tale winds along slowly as the women untangle the threads and ultimately find themselves in a big-bang, violent conclusion. But the pair’s progress to a solution, while not exactly plodding, lacks pacing and suspense. What’s more, all the promising relationship elements fade away toward the end, and the characters don’t seem to care.

All in all, this tale, though well written, flops around too much, never getting going and never settling into satisfying closure. It’s disappointing.

Bob Duffy is a Maryland author and book reviewer.

The Happiest People in the World: A Novel

Thin characterizations are overwhelmed by plot twists in this tale of a Danish cartoonist in hiding.