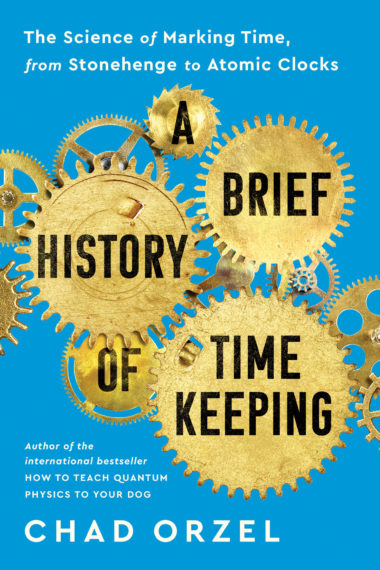 Chad Orzel is a physics professor at Union College in Schenectady, NY, who aspires to share science with nonscientists via his blog, TV appearances, and books with such titles as How to Teach Quantum Physics to Your Dog and How to Teach Relativity to Your Dog. If the author’s erudite pets can grasp all the fascinating, complex concepts presented in his latest work, A Brief History of Timekeeping, I am in awe.

The science of timekeeping is an amalgam of astronomy, mathematics, physics, quantum mechanics, meteorology, philosophy, and politics. Underlying this science is the counting of the oscillations of anything. As a bumper sticker, the field could be described thusly: “Timekeepers Count Ticks and Tocks.”

The baseline of timekeeping, says Orzel, is the definition of the second, quantified by atomic clocks as the duration of 9,192,631,770 oscillations of an energized caesium atom. Yet the count can change due to any number of atmospheric variables, so even this level of precision eventually will require a “leap second” adjustment.

The book includes 16 chapters describing the methods used to keep time, the science behind it, and the many people involved in doing it. Orzel starts at the very beginning by exploring humankind’s earliest realizations that shadows cast by the sun vary season to season, leading to the building of “archaeoastronomical” structures whose designs indicate an awareness of the solar cycle (the circa-2950 BCE Stonehenge may be the best-known example of this).

Some form of timekeeping has long been used to identify when to plant and to harvest, when to prepare for annual floods, and when to celebrate and to mourn. Both solar and lunar cycles have long been used to mark intervals of time, as have the positions of the planets and stars. A compass is great for direction-finding during the day; the stars are even better for discerning time and direction at night.

Sundials served as some of the earliest clocks, although sand and water were also used to measure time. The pendulum clock, invented in 1656, provided a swing of equal intervals (harmonic oscillation) for more accurate timekeeping. The introduction of gears and springs increased the accuracy of the pendulum clock, making it the most popular timekeeper until the 1930s. (The famous Foucault’s pendulum, built in 1851, utilized gravity to prove the earth’s rotation.)

Huge pendulum clocks were made for public spaces; smaller ones soon came indoors as grandfather and wall clocks. Watches were later developed as personal timepieces that utilized springs for energy (hence the need for winding), a pendulum-like balance wheel to provide countable ticks, and gears to move the hands.

The discovery of the faster oscillations created by crystals (as opposed to springs) brought astonishing improvements to clocks and watches and eliminated the need to endlessly adjust them for accuracy. Today, quartz watches can be relatively inexpensive (under $200) yet far more accurate than the top-of-the-line Rolex Yachtmaster ($29,990) or Patek Philippe Nautilus ($795,000) mechanical watches.

The need for accuracy in timekeeping, of course, is critical to the military, air-traffic controllers, and for countless industries and individuals. The optical clock is the most accurate timekeeping device now being developed and trumps even atomic clocks for precision. Optical clocks utilize microwaves and lasers to prepare and measure the oscillation of activated atoms or ions that have been forced to absorb light. (Presumably, a $10 version will be available at Walmart in the next decade or two.)

While Orzel describes the evolution of timekeeping devices, he also does a deep dive into timekeeping’s history and history-makers. This includes a look at the Julian calendar, in use for 1,500 years; Pope Gregor’s simpler, more accurate Gregorian calendar, 300+ years old and still going strong; the contributions of Galileo, Copernicus, and Newton; and Einstein’s definition of the constant speed of light as a critical tool for understanding time. The author also delves into Einstein’s theory of general and special relativity, and the confounding (at least for lay readers) concepts of space and the four dimensions.

If this sounds like a lot to take in, it is. Despite Orzel’s attempt at a light touch, A Brief History of Timekeeping is essentially a textbook. As such, it isn’t hard to put down. But for patient readers willing to take it slow, the book offers an opportunity to plunge into an intriguing scientific topic without drowning in too much math. And if you happen to be a dog who already understands quantum physics and relativity? This volume will be a breezy refresher course.

Paul D. Pearlstein is a retired lawyer and an amateur musician who enjoys an eclectic reading list.