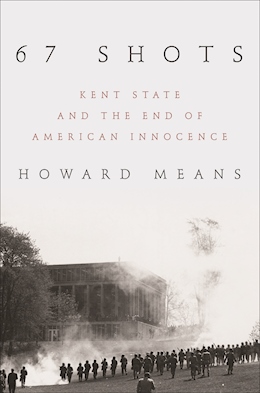 One of the most iconic photographs of the Vietnam War era is that of a horrified teenage girl kneeling beside a student shot dead by a National Guardsman on the Kent State University campus.

American colleges had already been in turmoil as a result of the increasingly unpopular war, but in the spring of 1970, protests reached a new height when President Richard Nixon announced a U.S. incursion into Cambodia on April 30th.

Kent State, a mid-sized institution in Northeast Ohio, was among the many campuses roiled by his action. The school was still relatively little-known outside its region; that changed on May 4th, when four students, ages 19 and 20, were killed and nine others were wounded in a confrontation that could have been avoided.

Over the past five decades, this tragedy has been examined in films, plays, music, and a number of books, including ones by Philip Caputo, James Michener, and I.F. Stone. Howard Means, a prolific author and former Washingtonian editor, has now joined them with 67 Shots: Kent State and the End of American Innocence.

Among Means’ previous books on history and biography are those on Johnny Appleseed, the Civil War, Colin Powell, and former FBI director Louis Freeh. He brings the same level of solid storytelling to present a chilling picture of how bravado, naiveté, miscalculation, lack of training, poor management, and even politics came together to shatter lives and shock a nation.

Culling through oral histories and conducting his own interviews, the author develops the narrative, which takes the reader from the immediate reaction to Nixon’s Cambodia announcement through the next week, when “Kent State” was transformed from a university name to a rallying cry. Even though we know the outcome, Means builds the suspense, making the well-known story a gripping and thought-provoking teachable moment.

The eventual confrontation escalated from disorderly drinking in the adjacent town of Kent, Ohio. Crowds began to form and became unruly. Soon the ROTC building became a target for arson; campus police and officials watched it burn down. The pivotal moment came when the city’s mayor contacted Governor James Rhodes, a tough law-and-order Republican who was locked in a tight primary campaign for a U.S. Senate seat. Rhodes dispatched the National Guard to the university.

Many of the guardsmen were young and some had joined to avoid Vietnam service. They were quickly assembled from duty in close-by Akron and were tired, unfamiliar with peacekeeping responsibilities, and plagued by a confusing chain of command. And they were equipped with old but still highly lethal M1 Garand rifles, which Means discusses in detail.

The goal of these men was to disperse students and restore peace to the campus. After a curfew and show of force, including helicopters, failed to quell the disturbance, tear gas was employed. As the situation deteriorated, university leaders, among them its well-respected president, either abrogated their responsibility or were supplanted by the National Guard.

Without any intermediaries to reduce the tension, the campus became a battleground between the National Guard and a crowd of student activists. As student taunts grew, accompanied by the launching of small projectiles, the guardsmen overreacted. The result: the firing of 67 shots within 30 seconds. Student casualties included those simply walking by or watching, some a considerable distance away.

As Means points out, there were many mistakes, many people responsible — some directly and some unwittingly. However, the absence of a clear understanding of the situation and the way to cope with it, on both sides, allowed Kent State to become a tragedy.

One of the few heroes was faculty member Glenn Fry, whose impassioned pleas to students to disband saved lives. Among those the author criticizes are Nixon; Vice President Spiro Agnew, who continued his rhetorical attacks on students; Governor Rhodes, who lost his senatorial primary; and local and university officials.

Certainly Means is a good writer, but sometimes he slips into a journalistic style, perhaps reflecting his magazine background. For example, the university president, away from campus, “was needed at the mother ship.”

And although he correctly notes that the resultant President’s Commission on Campus Unrest (the Scranton Commission) rendered “a report that remains admirable today for its thoroughness and clarity,” more could have been said about it. It is also a bit surprising that he would interject a brief discussion of the shootings at Virginia Tech and Sandy Hook into the story. Still, these are quibbles.

67 Shots is a fine book which adds another, often fresh account of a sad but significant episode in modern American history. Some readers may not be fully aware of the Kent State story. They will profit from reading 67 Shots, both for its insights and its tutorial on dissent and the reaction to it.