The Secrets of Her Success 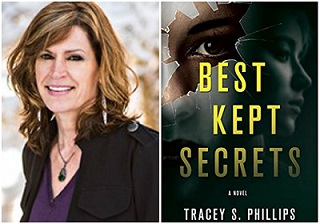 Author Tracey S. Phillips describes herself as a serial artist. And why not? She plays and teaches piano; has tried painting, jewelry-making, furniture redesigning, and drawing; and was even a fashion model in college. Now she writes books filled with dark secrets, sociopathic killers, and strong women.

In her debut novel, Best Kept Secrets, Phillips uses the bond of friendship as the backdrop for a murder investigation that spans 20 years.

What if your friend had kept a secret that was the key to solving her own murder? That’s what haunts homicide detective Morgan Jewell every day. She lives with the grief and guilt of her best friend’s killing 20 years prior.

She’s sure that if she’d known Faye Ramsey’s secret, she could’ve prevented her death. Faye disappeared the night before they were to move into a college dorm together. Days later, it was Morgan who found Faye’s beaten, bloody body in the woods.

Morgan became a detective in order to one day hunt down her best friend’s killer.

Now the murder of a local woman is eerily reminiscent of Faye’s death. As Morgan uncovers clues, she's convinced the same person is responsible. Links to siblings Ekhard and Caryn Klein seem pivotal to unlocking the riddle of Faye’s murder. But what Morgan discovers terrifies her — Faye wasn’t the only one keeping secrets.

The story was born from my interest in personalities and the human mind. My family is small, but there are some wacky characters in it. Why are they like that? That’s what I love to figure out. So, characters drive my books.

The idea for Caryn Klein came long before I knew her story. Like so many writers, my debut wasn’t my first manuscript. I had been writing and rewriting other stories for four years before starting this one. I’d also been attending many writer’s conferences across the Midwest.

I wanted accuracy in my stories. So, when I found out that Sisters in Crime had moved their Writer’s Police Academy (WPA) to Appleton, Wisconsin (two hours from my home), I enrolled.

At WPA, forensic psychologist Katherine Ramsland taught classes on sociopaths and criminal behavior. I remember the exact moment I got the idea for Best Kept Secrets while sitting in her class as she discussed juvenile killers.

It seems like psychology and mental illness are the foundations of the story.

I’ve always enjoyed studying psychology and mental states. Reading about borderline personality disorder and psychosis fascinates me. I’m also curious about spectrum disorders, like Asperger’s and sociopathy. We can put every single human quality on a spectrum of some sort, but what makes one person sacrifice their life for another — as first responders can and often do — while another person has no compassion or ability to empathize? Those attributes make me curious and light up my writer brain.

In Best Kept Secrets, Morgan witnesses something. We don’t know what, but the event is so disturbing that her mind erases it from her memory. She can’t remember it. Her psychiatrist diagnoses her with Perpetration Induced Traumatic Stress (PITS). When she least expects it, something will trigger her to remember what she saw.

What didn’t make it into the final version of the book?

There was a sex scene that got cut. Sorry.

It’s funny to me that, in polishing Best Kept Secrets, I had written twice as much as I needed. The streamlined rendition that got me a publishing deal was the bare-bones book. Once my editor at Crooked Lane got into it, they asked me for more. More character development and more of Morgan. So, what I thought didn’t belong went back in.

When did you first know you wanted to be a writer?

My son was still in high school and my daughter was a sophomore in college when I began to fantasize about taking my laptop on a vacation — alone.

At Berklee College of Music, I majored in music production and engineering. One of my professors asked us to write a paper about our favorite song. In it, we were to include the instrumentation, notes about the arrangement and form, and talk about the harmonic structure. The song I chose was “Elevator Man” by Oingo Boingo (Danny Elfman’s band for you fans out there). And I nailed it. The professor gave me an A++ and asked if he could use my paper as an example to show future students in his class. Now I teach piano lessons. But it isn’t my dream job, by a long shot. I didn’t realize I wanted to write, but I should have recognized the clues.

Any advice for those aspiring authors out there?

Though it seems like the dumbest advice in the world, I’d have to say, keep writing. Many instructors on my journey had the same advice, and they were right. Keep writing. Keep revising. Do it every day. That adage of “butt in chair” only works if you do it. Write and write until you can no longer see the words. Beneath them is the story. Find the story and make it the best you can.

I read what I love to write — thriller, suspense, and mystery. But I’ll read almost anything if it’s a good story. I gravitate to the British writers like Ruth Ware. But I also love a good thriller that has a fantasy element — Alma Katsu is so good at that.

I LOVE paper books. I love the feel and the smell. When I was growing up, my family owned a summer lake house in Northern Indiana. The house was — and still is — the oldest house on the lake. The floors creak and the rooms are small. The plumbing is noisy.

Up a narrow flight of stairs, there’s a library. It’s a big, expansive room with a fireplace and a couple beds. There’s a table to play cards and a couch and an old rocking chair. On either side of the fireplace are bookshelves. The books on those shelves go back to when my great-grandmother owned that house. She used to read and play cards while sitting at the window, watching my mom and aunt play in the water.

Those books smell so good to me — it’s because they are damp with humidity and slightly moldy. I love opening them to inhale the musty, papery fragrance. It’s where I first began to enjoy reading. The first book I remember was The Thirty-Nine Steps by John Buchan.

As a serial artist, you’re well versed not only in writing, but also in making beautiful music.

I love music and playing the piano. I was raised as a classical pianist, and my favorite pieces are Chopin etudes and anything Beethoven. I’ve played the Beethoven Pathetique Sonata no. 8 and Debussy’s Clare de Lune, as well as Albéniz and Rachmaninoff. Right now, I’m memorizing the even-numbered Bach two-part Inventions, 2, 4, 6, 8, and 10.

Tracey S. Phillips has knocked creativity out of the park. I can’t wait to read her next creation — maybe while listening to some Chopin.