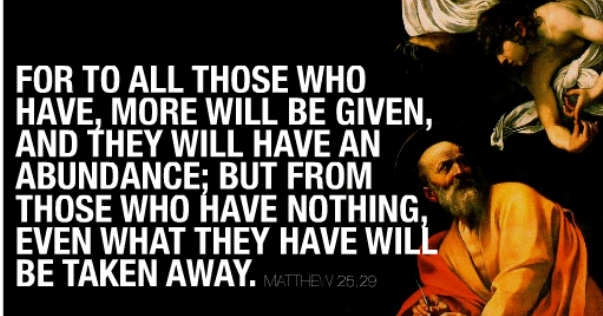 Years ago, I was frustrated in my job because I thought my boss was getting all the credit for the work we did. I liked my boss, plus he was brilliant, experienced, and well-known within certain circles ... it’s not that I felt he was stealing my ideas. But I couldn’t understand why I was invisible to people outside our organization. It was infuriating: why did they refer to everything we did by his name alone? One day I Googled the subject and came across the concept of The Matthew Effect, which states, in short, that the rich get richer while the poor get poorer. Or, put another way, fame and status beget more of the same ... while the lack of fame and status is easily perpetuated.

The Matthew Effect is well-known in science. Once I had a name for it, I realized I’d been guilty of it, too, attributing scientific papers solely to well known PIs and ignoring the no-doubt-significant contributions made by lesser-known coauthors. The Matthew Effect extends beyond the science disciplines. For example, this recent take-down of Stanley Fish in The New Republic chastises him for his view on anonymous submission to journals: a view that implicitly recognizes The Matthew Effect (“I am against blind submission because the fact that my name is attached to an article greatly increases its chances of getting accepted”).

And The Matthew Effect is a fundamental part of the culture here in Washington, D.C., where staff are supposed to be anonymous, and to pick up the papers you’d think there are about 250 people in this town who do and write virtually everything, while everyone else is window dressing. My guess is The Matthew Effect is intrinsic to the way humans think, which is why it’s not too surprising to also see it in that most subjective and unpredictable of industries: publishing. 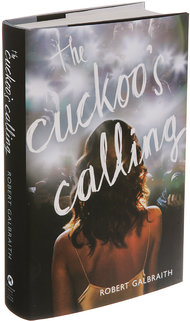 The Cuckoo’s Calling by Robert Galbraith—oops, I mean J.K. Rowling—is a great example. Rowling managed to pull The Matthew Effect on herself!

Now, we all have authors we enjoy: I just gleefully received Stephen King’s forthcoming novel Dr. Sleep, while I doubt I’d read a horror novel by an unknown author. But how many Harry Potter fans also naturally gravitate to detective novels? The Cuckoo’s Calling, well-received by critics and with respectable sales, would have vanished into quick obscurity had Rowling’s identity not been revealed (the book is currently #1 on the NY Times Bestseller List and has been on the list for six weeks). This recent piece in The New York Times uses The Cuckoo’s Calling as an illustration of how hard it is for debut novelists to get noticed. But, to me, it says more about The Matthew Effect.

What is an unknown writer to do in a world that so thwarts the concepts of objectivity and meritocracy, where the exact same book is received so differently depending upon who wrote it?  J.K. Rowling, of course, did not start life as a superstar author. Nor
did she come to publishing as a well-known commodity. It seems telling that Rowling’s motivation to publish as Galbraith was
to throw off what she felt were the constraints of her fame.

There may be a lesson here. Until someone’s paying me enough for my writing so that they can exercise control, or until seeing my name leads to expectations on the part of readers, I can do whatever the hell I want. That means focusing on writing the best book I can, because that, after all, is what gets me up at 5:30 most mornings. For the part I can’t control, it means conjuring a little zen. It’s no less exasperating, but at least the effort is going to the right place.

Shelf Awareness reports that Barnes & Noble may close up to 20% of its retail stores over the next decade. It’s worth it, if you have the time and have access, to dig into the longer Wall Street Journal piece on which the report is based.

The Independent’s Most Popular March Posts

A recap of the most popular of our 50 March posts.