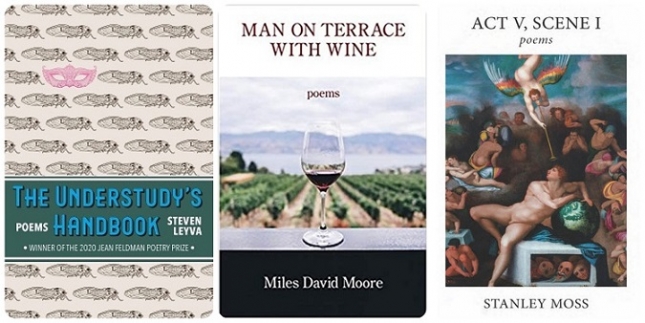 For my first poetry review in the New Year, I’m taking a look at how poets deal with the past. The three collections considered here, whose authors span decades and career lengths, all explore in some way the uses and meaning of the past. What does history mean to and for a writer? How does an individual writer in the 21st century absorb, draw on, and learn from what came before?

Steven Leyva’s debut collection, The Understudy’s Handbook, establishes its roots right away in the history, geography, and music of the poet’s native New Orleans. The book’s opening poem, “Primer,” begins, “There’s no New / Orleans, only the pauses between parades,” establishing the tone throughout: a mature voice, often declarative, sometimes playful — as in the line break on “New” — but always with a purpose. The tastes of beignets and chicory coffee, crawfish and bechamel sauce, are haunted here by the exiles who prepare them, laboring over “low heat for centuries” as storms decimate the buildings they stand in.

New Orleans holds one kind of history for Leyva; the work of the great, groundbreaking Black playwright August Wilson holds another. References to Wilson’s plays, including “Ma Rainey’s Black Bottom,” “Joe Turner’s Come and Gone,” and “King Hedley II” emphasize that Leyva, like Wilson, offers no easy answers to unravel the complexities of lives riven by racism.

“Hedley without the Rooster” centers on a brutal one-on-one basketball game between father and son; “Playing Levee,” a riff on “Ma Rainey” and its tragic, thwarted character, Levee Green, asks, “What becomes / of a man’s song / when there is no record?”

What I admire most in Levya’s work is its unabashed vulnerability. He never tries to play the hero in these poems; he admits that he knows as little about life’s mysteries as anyone else, yet he keeps looking for, even fighting for, answers. The poem “How Our Sons Learned to Fight” manifests this struggle for meaning in its closing lines:

…We remember
we invented our fathers’

advice about how to fight
another man, because we
did not know how to begin

a love, only how to bruise the end.

Again those stunning line breaks — the suggestion that the “we” somehow invented their own fathers; the line beginning with “another” and ending with “we”; the line and stanza breaks at “begin” that sustain a mystery before landing on “love,” not the more expected “fight” — lead to an admission of failure that is historical, generational, and particular. Leyva, also a columnist for the Independent, is a talent to be reckoned with. This book will haunt me for a very long time.

The title of Miles David Moore’s third full-length collection, Man on Terrace with Wine, is a perfect metaphor for the viewpoint of many of its poems. William Wordsworth’s famous statement about poetry being based on “powerful emotions” that are then “recollected in tranquility” came to mind as I read this book. Throughout, the expressions of grief and loss are tempered by the poet’s discernment and cool head.

History in this book manifests in several ways. References to World War II appear in many places, notably “The Good Fight,” which pays homage to the author’s mother’s heroism as a nurse who landed at Utah Beach on D-Day. Moore draws on cultural history in a variety of ways, ranging from Walt Whitman and Johann Sebastian Bach to Elvis Presley and Andy Warhol.

In a wild ride of a prose poem, he imagines “Elvis and Princess Di’s Nuptials in Heaven,” attended by historical figures from Aristotle to Richard Nixon, the latter who, the poet assures us, had to get a day pass from Hell. Moore can be very funny, and the humor winding through this collection is one of its joys.

But I was most moved by his more serious considerations of self and the passage of time, particularly in the sonnet “An Oldie.” The poem recounts the double-edged experience of hearing “that song you used to love” and still being moved by it, while recognizing its artistic inadequacies. It concludes:

Marked as a sentimental fool, you crawl
Toward your exacting mind, a heart debased
By all the tawdry dives it used to haunt.
How we betray ourselves by what we want.

How visceral that self who crawls back to the mind’s standards within the poem’s tight rhyme scheme, how mournful that scolded heart. We betray ourselves, indeed.

Few poets can compete with Moore for range of cultural references, but Stanley Moss is one of them. The author of over a dozen collections of poetry and translations, Moss is now in his 90s, making the title of his new book, Act V, Scene I, particularly apt. This may well be his final “act.”

In this book, the history of art and literature is lived in, immediate. “Wandering,” a poem about clouds that slyly tips its hat to Wordsworth, branches into references to the poet Virgil and artists Fra Angelico and Rembrandt in its first stanza.

An epistolary birthday poem to Michael Schmidt — a writer and Moss’ U.K. publisher — touches on Shelley and Chopin, Shakespeare’s Falstaff and Homer’s Achilles. One of the glories of a long life must surely be a mind so amply furnished with images, examples, and stories, and I found that richness to be this book’s chief delight.

Moss’ love for wordplay is less satisfying to me. “Who Am I to Say?” begins, “History is ordinary, but not W.H. Audenary,” and though I caught the allusion to Auden’s great poem “Musée des Beaux Arts,” it seemed to me an excessively clever, even off-putting beginning to a poem that otherwise holds considerable tenderness.

Moss’ many references to the writing of poetry itself became, for me, a bit less fresh with every recurrence. But at his best, as in another epistolary poem, “For W.S. Merwin,” Moss spins his wordplay toward wisdom, as in these lines: “I hold if you want to understand someone’s heart / find out what breaks it.”

I’ll be meditating on that idea for some time.