The Dragon: Fear and Power, and Fairies: A Dangerous History

Two familiar critters from folklore have their day in these cultural histories. 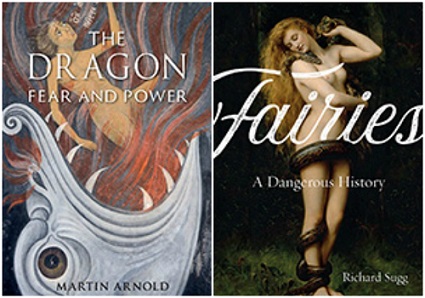 This pair of books, released on the same day by the same publisher, reflects the temper of the times in today’s publishing market. Both attempt serious cultural histories of the extraordinary creatures they profile. Both also appear to be aimed at attracting crossover interest from another consequential reader segment.

Fans of pop entertainment phenomena like Game of Thrones, Lord of the Rings, and the Harry Potter oeuvre may see these as handy guides to the marvelous creatures that nowadays skitter or soar through transportive fables. Indeed, both authors delve at length, and with admirable knowledge and insight, into contemporary media spins on their respective totems.

For the most part, these books are thoroughly researched and richly illustrated chronicles of the folkloric and literary pedigrees of their subject creatures. And they both come from Reaktion Books, a London-based independent publisher with a deep and wonderfully eclectic backlist.

Martin Arnold’s The Dragon: Fear and Power is the more scholarly and traditional of the two. Arnold, Reader Emeritus in Old Northern Studies at the University of Hull, is scrupulously academic as he recounts the history and significance of dragons in literature and art around the world.

The Dragon features sumptuous color illustrations, a deep bibliography, and notes that invite the reader into independent excursions leading well beyond its pages. Author Arnold is clearly a world expert in dragon lore across genres and media. He guides the reader through a long and fascinating history of this mythical beast’s appearances: from the Hebrew Bible to medieval bestiaries; from the dragon-carved prows of Viking ships to the red dragon of the Welsh flag; from the dragon’s ubiquitous presence in Chinese culture and art to the Indian naga and the conciliatory basilisk of Kenneth Graham’s The Reluctant Dragon. He concludes with an insightful discussion of George R.R. Martin’s Game of Thrones.

Simultaneously expansive and granular, this study may not be the ideal choice for casual readers, but it will still prove a rewarding, not to mention highly quotable, resource for browsers. If you are interested in any manifestation of dragon lore — religious, folkloric, literary, or artistic — this marvelous volume should be your point of entry.

Fairies: A Dangerous History, though scholarly and informative in intent, differs substantially from The Dragon in both method and tone. Author Richard Sugg exudes a breathless, even wistful, admiration for fairy worlds rarely seen by mortals like us. He serves up an impressionistic brew of fairy folklore, notably through firsthand testimony from observers in the last two centuries.

Sugg seems to have gleaned these reports entirely from secondary research, and they come in the main from subjects in Ireland, Scotland, and Wales. Apparently, these anchors of the so-called “Celtic fringe” are hotbeds of fairy fascination — if not infestation — judging by the sheer volume of cases Sugg cites.

Thanks to Sugg, we now know fairies most often wear green or red, are associated with watery places and disappearing islands, and that they steal children, substituting dullard stand-ins in their place. (He also reports that Martin Luther advised parents to drown these “changeling” tots, but that’s perhaps too chilling in its implications to discuss here.)

About midway through Fairies, Sugg seems to run out of hoary anecdotes, and he pivots to fairy appearances in literature, art, and film. And here he gives us a respectable commentary on fairy folk as they appear in Chaucer, Shakespeare, and the English Romantic poets. He lingers over the fairy-minded among the Victorians and Edwardians, where he discusses the Pre-Raphaelite painters, Peter Pan, and Arthur Conan-Doyle, that ever credulous acolyte of worlds unseen.

Then Sugg moves on, quite capably, to cinema, commenting on Disney and Spielberg, as well as the filmic treatments of the colossally successful spare-time fantasies of Oxford scholars J.R.R. Tolkien and C.S. Lewis.

Not everyone will like this book. Fairies reads as if written by a garrulous enthusiast intent on regaling us with his eccentric charm. A pair of examples:

“Perhaps…the fairies are closing us into a web of strangeness from which we will never escape. This may be a good point, then, to breathe a moment and allow any more fearful readers to retrace their steps while they still can…

“Poised, now, on the threshold of the nineteenth century, we must be prepared to move with force and decision through the fairy riots that crowd us in from all sides — lest, exhausted with the onslaught of gorgeous sound, colour and spectacle, we fall benighted in some elfin glade, never reaching the Edwardian era at all.”

Although he raises the question teasingly, the quirky Sugg never reveals if he actually believes in fairies. But you may well have your suspicions after sampling this frothy goblet of a book. Even so, for all its purple-prosy excursions, Sugg’s Fairies is a fun and informative read, although many readers will lose patience along the way.

Stephen welcomes Keith Thomson back to the program to talk about his new comedic international thriller Twice a Spy.