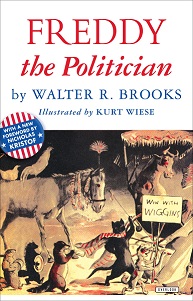 A few months ago, actor Alan Young died. You probably knew him as Wilbur Post, the only human the horse named Mister Ed conversed with during the eponymous 1960s TV show.

Ed first appeared back in 1937, in a Liberty magazine series where he and Wilbur not only talked to each other but also enjoyed more than a few drinks together. The stories were written by Walter R. Brooks, who passed away in 1958 and never saw his equine creation become famous.

In his lifetime, Brooks was perhaps best known for the Freddy the Pig series of children’s books, where conversations between people and animals were relatively common. Brooks produced 26 Freddy books between 1927 and 1958, telling tales largely set on a farm outside Centerboro, a fictional burg somewhere near Syracuse.

Freddy, the principal character, wore plenty of hats — newspaper editor, pilot, politician, banker, poet, detective, and even football player (fortunately, no one told him what the ball was made from) — covering a wide variety of interests for young readers. Among other key characters were a thoughtful cow named Mrs. Wiggins, a cynical cat named Jinx, a jabbering rooster named Charles, and a wise old owl named Whibley. In the books, the animals outwitted a variety of human and animal villains.

The plots were usually clever and the writing was polished and funny. Centerboro seemed like it would be a fine place to live, and I retreated there quite happily every time I discovered a previously unread Freddy volume at my public library in Upstate New York.

Fast-forward 40 years or so to the early 2000s. Late one night when Internet search engines were new, I found myself wondering if anyone else in cyberspace remembered Freddy. To my surprise and delight, the Friends of Freddy had formed in 1984 and gathered every-other year in central New York State, near where Brooks wrote the series.

I joined immediately, of course, and found that my fellow Friends were wonderful folks — many eligible for AARP, but also including a heartening sprinkle of extraordinary grade-school kids who prefer the wisdom and wonder of books to videogames.

The group’s initial goal — achieved in 2003 thanks to Overlook Press, which faithfully used the original typeface and the original illustrations by the renowned Kurt Wiese — was to get the entire series back into print.

Meanwhile, there have been foreign-language editions in German and Mandarin, and in April of this year, two titles — Freddy the Detective and Freddy and the Dragon — were released to great fanfare in the United Kingdom by Duckworth Press.

These days, the group’s goal is to help make sure that future generations can enjoy the books. That’s a bit challenging when the last new tale was spun more than half a century ago, but the canon holds up well despite a lack of air conditioning, cell phones, and Internet service.

The biennial gatherings of Friends feature all sorts of presentations based (often very loosely!) on the celebrated pig. In 2014, for example, one explored similarities with Jane Austen’s novels, while another examined how Brooks set scenes and wrapped up stories.

At previous conventions, presentations have included looking at colorful expressions Brooks used to avoid “going blue,” performing a rap song the animals might have put together if the genre had existed then, creating maps of Centerboro and environs, and even psychoanalyzing the dynamics of the barnyard.

Because the group meets in the fall during even-numbered years, every other convention occurs when presidential campaigns are in full swing. One of the best-loved Freddy books, Freddy the Politician, features the formation of the First Animal Republic and a hard-fought presidential election pitting a fast-talking woodpecker from Washington against the sensible and homegrown Mrs. Wiggins. More than once, parts of the story have been adapted as short plays performed at the group’s conventions — always with an effort to avoid actual partisan controversies but with a skeptical eye cast on fast-talking woodpeckers.

This year’s Friends of Freddy convention will be held at the Winter Clove Inn in Round Top, New York, from October 12-14, just a few weeks after Overlook Press plans to release a special edition of Politician featuring an introduction from longtime Freddy fan Nicholas Kristof of the New York Times.

[Editor’s note: Overlook Press’ election edition of Freddy the Politician will be released on Sept. 27th.]

Randy Cepuch is the current treasurer of the Friends of Freddy and a former editor of the group’s quarterly publication for members, the Bean Home Newsletter.

Detroit-based Write A House calls itself a “new type of residency program,” one where writers get to live in their prize forever.