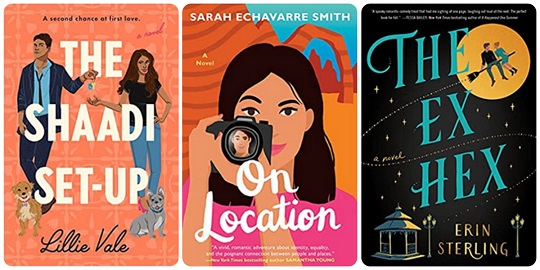 Happy October — my favorite month of the year! It’s starting to feel like fall in Virginia, which means I’m wearing a hoodie with a book tucked in my kangaroo pocket. Okay, just kidding. (Or am I?) I’m the only person I know who actually likes the shorter days. I do, though — and the cozy, candlelit nights (preferably spent reading a new book). Here are three romance novels I especially enjoyed recently.

I love a second-chance love story, and Lillie Vale’s The Shaadi Set-Up (Putnam) is one of my favorites of 2021.

Rita Chitniss is an Indian American woman with a successful furniture-restoration business and a devoted boyfriend who is ready to settle down. There’s just one (big) problem: She’s keeping her relationship with Neil Deiwan a secret because of bad blood between their families. Things are further complicated when Rita’s mother invites Rita’s ex-boyfriend, relator Milan Rao, to lunch. Rita finds herself reluctantly agreeing to help Milan with a house-flipping project.

She’s hoping to prove to Milan (and herself) that she’s over him — but spending time with the man who broke her heart is bringing back some old familiar feelings. To head off further matchmaking attempts, and to appease Neil’s overbearing mother, Rita signs up both Neil and herself on Desi dating site MyShaadi. She’s hoping that once they match online, their feuding families will accept their relationship. But the site doesn’t match Rita and Neil, it matches Rita and Milan!

With a lovely cast of secondary characters and snappy dialogue all around, The Shaadi Set-Up is a humorous and heartfelt romance about finding your first love for the second time. Lillie Vale’s adult-fiction debut is a charmer!

I’ve never been to Utah, but Sarah Echavarre Smith has me ready to book a trip after reading her enemies-to-lovers romance, On Location (Berkley).

After years of hard work and dedication at TV’s top travel channel, showrunner Alia Dunn’s series about hiking in Utah’s national parks just got the greenlight. That’s the good news. The bad news? Her newest crew member is Drew Irons — a guy who ghosted her. On top of that, her host for the show is a hot mess of a reality-TV star with a long list of bad habits and predatory behaviors.

This series is not just a feather in Alia’s professional cap, it’s a personal tribute to her late Filipina grandmother, who instilled in Alia a love of travel and the outdoors. Being able to fulfill her dream hinges on her keeping her host in line and her mind on the job. But Alia and Drew can’t ignore the chemistry between them, and lots of hot, steamy moments ensue. When things go sideways, Alia needs Drew’s help to set them back on course. But taking big risks means she might lose everything — her treasured project and the man she’s falling for.

For readers who love the great outdoors and haven’t gotten to travel in the last 18 months, On Location will make you long for the open road. The picturesque setting and behind-the-scenes look at TV production make for a memorable backdrop, but it’s the relationships — not only Alia and Drew’s, but also the close connections and mutual respect Alia shares with her crew — that make this one a standout.

Ending this month’s roundup on a magical note is Erin Sterling’s utterly bewitching The Ex Hex (William Morrow). What’s a witch to do when a spell gone wrong starts wreaking havoc? Why, team up with her ex to banish the bad magic, of course!

It’s been nine years since Vivienne Jones learned that her sexy Welsh boyfriend, Rhys Penhallow, was betrothed to someone else. Brokenhearted (and a little drunk), Vivi and her cousin Gwyn broke their golden rule: Never mix vodka and witchcraft. It was just a silly hex, though, certainly nothing to worry about. Right?

Vivi’s beloved town of Graves Glen, Georgia, was founded by one of Rhys’ ancestors and has a long, witchy history — which is how Vivi met Rhys in the first place. But following their breakup, Rhys returned to Wales, and Vivi has done her best to put him out of her mind, focusing on her career teaching history at Penhaven College and helping Gwyn and her Aunt Elaine in their shop, Something Wicked. But now Rhys is back, and Vivi can’t ignore the fact that things are going haywire wherever he goes. Could her spell be the cause of all the mayhem?

Self-deprecating and witty Rhys is a positively dreamy hero and a perfect match for reluctant witch Vivi. The quaint town and quirky cast of characters give The Ex Hex a “Stars Hollow” vibe, making this a must-read autumnal treat!